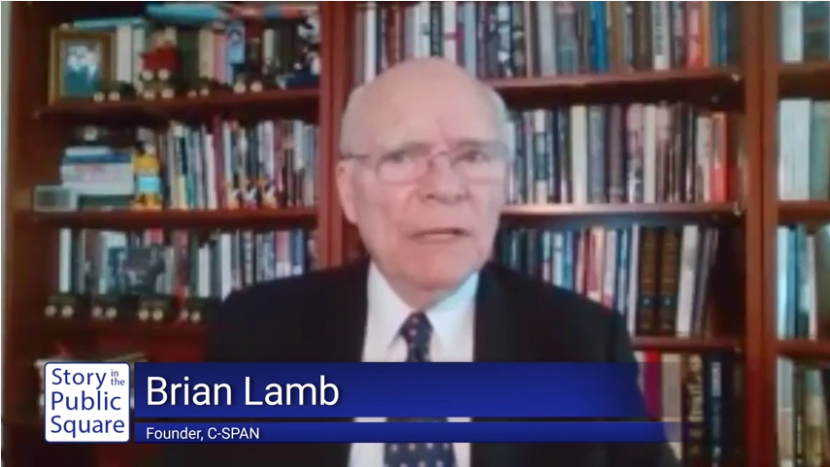 Before 1979, the only way to see the proceedings of Congress was to visit the Capitol.  Brian Lamb believed the American public had a right to see government working and convinced the cable industry to create C-SPAN, the Cable-Satellite Public Affairs Network.

After serving in the United States Navy, Lamb worked as a White House staffer and as the Washington bureau chief for Cablevision magazine.  Known for his unobtrusive interview style, direct questions, and balanced approach, Lamb has hosted C-SPAN’s “Booknotes” and “Q&A.”  His awards include the Presidential Medal of Freedom and the National Humanities Medal.

In this episode of “Story in the Public Square,” Lamb discusses the inspiration for C-SPAN; the reaction to cameras in Congress and the value the public would receive from adding them to the Supreme Court.  He also reflects on recent politics, including the January 6 insurrection.

“Story in the Public Square” broadcasts each week on public television stations across the United States. Check your local listings for broadcasts in your area. In Rhode Island and southeastern New England, the show is broadcast on Rhode Island PBS on Sundays at 11 a.m. and is rebroadcast Thursdays at 7:30 p.m. An audio version of the program airs five times each weekend on SiriusXM’s popular P.O.T.U.S. Channel (No. 124).  Listen Saturdays at 8:30 a.m., 4:30 p.m. and 10:30 p.m. ET; Sunday at 10:30 p.m.; or Monday at 2:30 a.m.  “Story in the Public Square” is a partnership between the Pell Center and The Providence Journal.