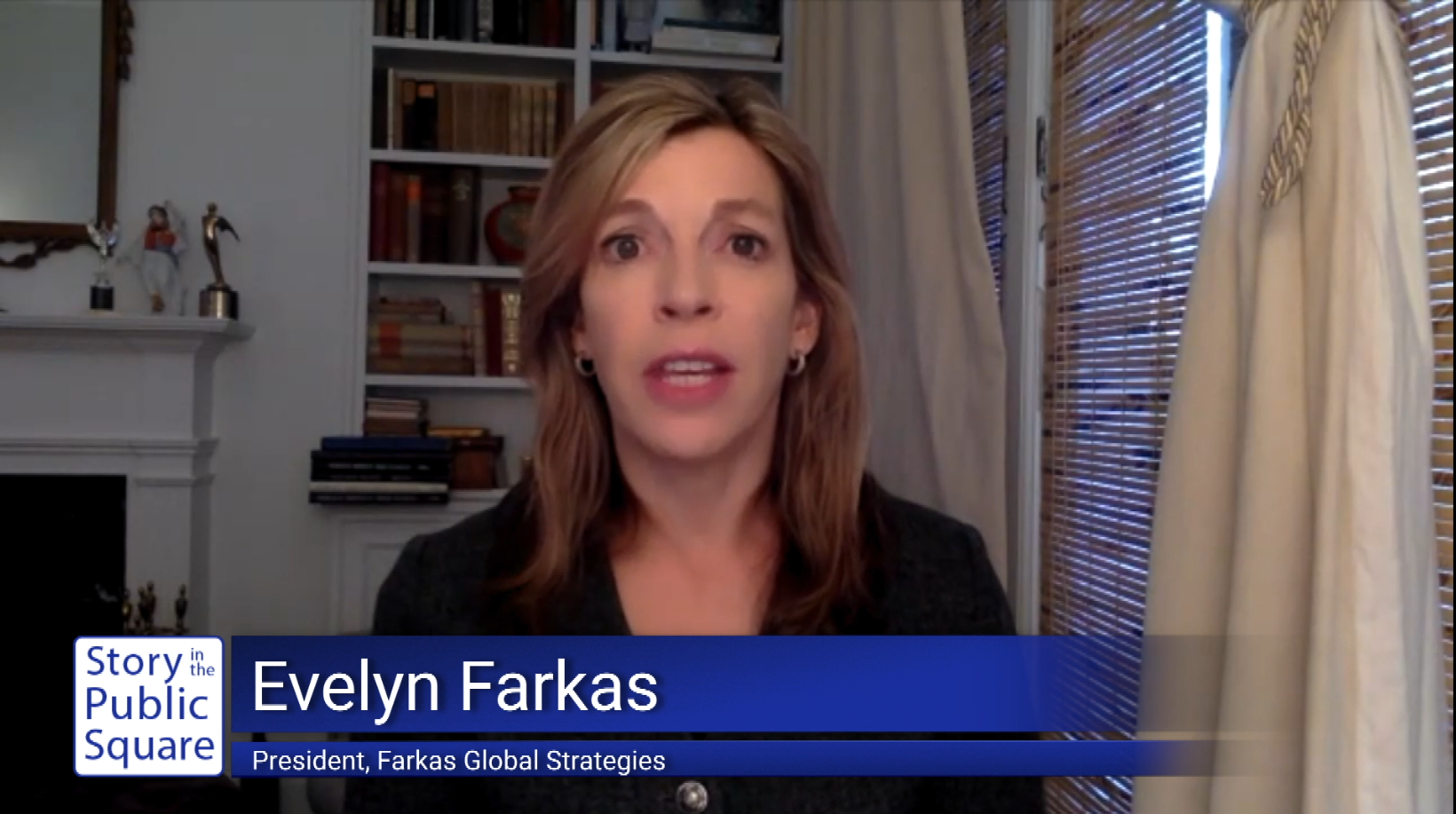 2021 is the second year of the pandemic, and it began, almost immediately, with a violent insurrection at the United States Capitol.  Dr. Evelyn Farkas helps us put the big stories of the last 12 months in context even as we name the top story of 2021.

Dr. Farkas has three decades of experience working on national security and foreign policy in the U.S. executive and legislative branches, the private sector and for international organizations overseas.  In 2019-2020, she ran to represent New York’s 17th Congressional District in the House of Representatives.  She is currently President of Farkas Global Strategies.  She was previously a Senior Fellow at the German Marshall Fund of the United States and the Atlantic Council and a National Security Contributor for NBC/MSNBC.   From 2012 to 2015, Farkas served as Deputy Assistant Secretary of Defense for Russia, Ukraine, Eurasia, the Balkans, and the Caucasus and conventional arms control.  From 2010 to 2012 she served as Senior Advisor to the Supreme Allied Commander Europe and Special Advisor to the Secretary of Defense for the NATO Summit.  Prior to that, she was Executive Director of the Commission on the Prevention of Weapons of Mass Destruction Proliferation and Terrorism and senior fellow at the American Security Project.  From 2001 to 2008, she served as a Professional Staff Member of the Senate Armed Services Committee responsible for the Asia-Pacific region, the Western Hemisphere, Special Operations Command and policy issues including combatting terrorism, and export control.  From 1997-2001 Farkas was a professor of international relations at the U.S. Marine Corps Command and Staff College.  She served 1996-97 in Bosnia with the Organization for Security and Cooperation in Europe (OSCE).  She has published numerous journal articles and opinion pieces, in addition to her book, “Fractured States and U.S. Foreign Policy: Iraq, Ethiopia, and Bosnia in the 1990s.”

On this episode of “Story in the Public Square,” Farkas joins hosts Jim Ludes and G. Wayne Miller to discuss the 2021 Story of the Year: “The Big Lie and the Insurrection of January 6, 2021.”

As a candidate in 2016, Donald Trump said the only way he would lose the election was if it was stolen from him.  In the summer of 2020, he began singing that same refrain.  Rather than simple red-meat to stir up his base, Donald Trump continued to challenge the results of the election well after Election Day, well after votes were certified in state capitals, well after the Electoral College had voted.  In the hours prior to Congress certifying the results of the Electoral College, President Trump, his lawyers, and his enablers continued to press the lie that the election had been stolen.

Tragically for anyone who cares about American democracy, President Trump wasn’t alone.  Senator Lindsay Graham of South Carolina reportedly pressured election officials in Georgia.  Trump himself asked the Secretary of State, there, to help him find a specific number of votes.  As journalists Bob Woodward and Robert Costa documented, the President even pressured Vice President Mike Pence to throw the Constitution into peril by claiming to have an authority to reject votes in the U.S. Senate that he did not have.

Then, on the morning of January 6, 2021, President Trump spoke to a rally of his supporters on the mall in Washington before encouraging them to march to the Capitol.  Once there, the marchers didn’t stop at the gates to the Capitol grounds.  They forced their way past police barricades and fought pitched battles with Capitol and DC police for hours—breaching the Capitol, the chamber of the U.S. House, and the U.S. Senate before order was restored.

But by then, the world had witnessed an insurrection on American soil that threatened the peaceful transfer of power from one president to the next.  It shouldn’t surprise anyone that Donald Trump refused to attend the inauguration of President Joe Biden.

And in the months that followed, Donald Trump has repeated the lie that this election was stolen from him, again and again.  In doing so, he’s not just setting the stage for a political comeback in 2024, he’s undermining the central pillars of our democratic republic: confidence in the integrity of our elections.