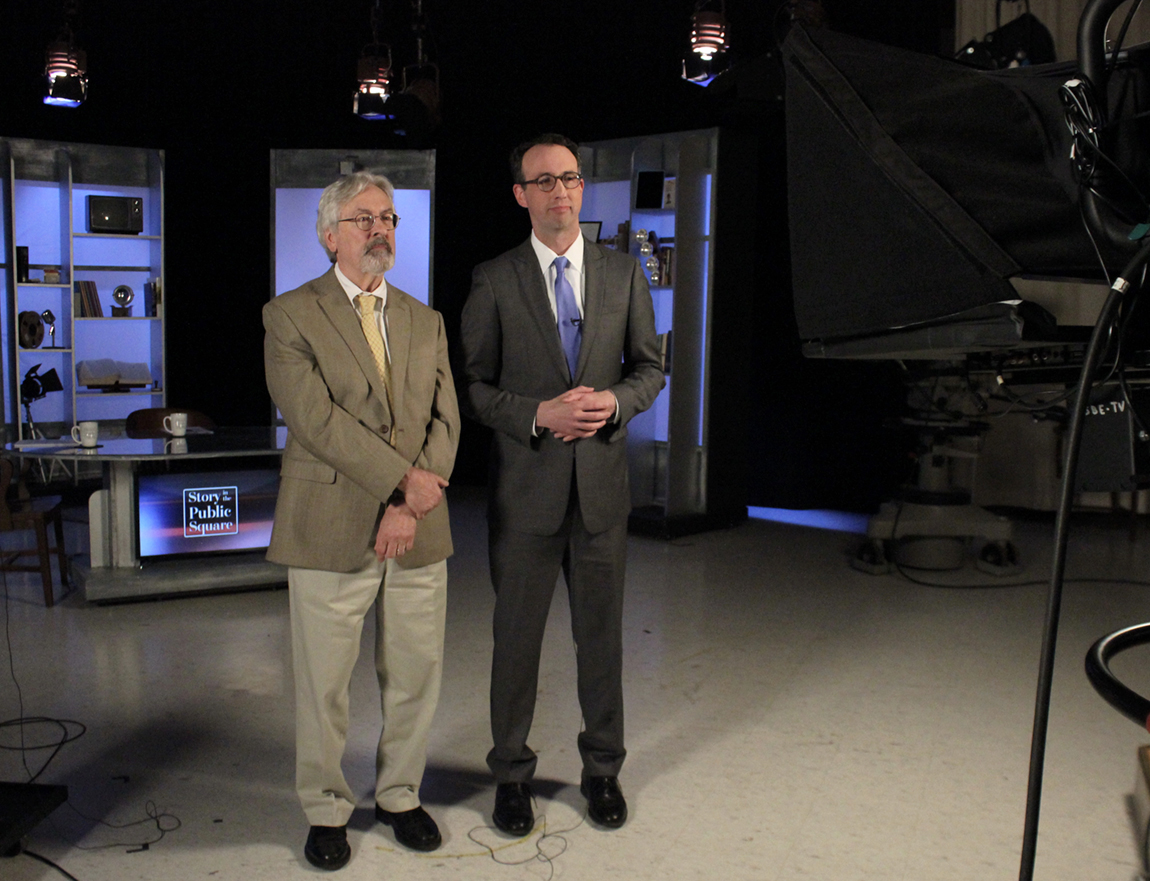 NEWPORT, R.I. – The Telly Award-winning series Story in the Public Square will be broadcast in major markets across America beginning September 10, 2018, the show announced on Tuesday. The show has been a fixture since January 2017 on SiriusXM Satellite Radio and in southeastern New England from its flagship TV station, Rhode Island PBS.

New York, Los Angeles, Chicago, Houston, San Francisco, Atlanta, Boston, Phoenix, Detroit, San Diego, Milwaukee, Tampa, New Orleans, Pittsburgh, Memphis, St. Louis, Portland, Oregon, and Birmingham, Alabama, are among the markets where the show will air every week. The show will be carried in 22 of the top 25 markets, 40 of the top 50 markets and 70 of the top 100 markets.

Hosted by Jim Ludes, Executive Director of the Pell Center for International Relations and Public Policy at Salve Regina University, and G. Wayne Miller, Staff Writer at The Providence Journal, Story in the Public Square is a weekly 30-minute public television program that tries to make sense of the stories shaping public life in the United States and abroad.

“We’re excited to bring the show to a national television audience,” said Ludes.  “Storytelling has always been central to public life but it has never been more important than now, when on a daily basis we are bombarded with stories from endless sources. Our guests help us sort them out and bring us to new understandings.”

“While we explore topics of significance to us as individuals and fellow citizens of a complex world,” Miller said, “we are also mindful that the best discussions are not only spirited but often fun. Our audiences tell us they like the lively tone we set. They also appreciate the still and moving images we incorporate into the show.”

Thirteen guests will appear on the first national season of Story in the Public Square. They are: best-selling author and Pulitzer Prize-winning New York Times staff writer Dan Barry; poet, artist and educator Eve Ewing, author of Ghosts in the Schoolyard: Racism and School Closings on Chicago’s South Side; and Omer Bartov, Brown University historian and author of Anatomy of a Genocide.

Also, Caroline Orr, behavioral scientist who with her handle @RVAwonk has taken Twitter by storm; Oscar-nominated Greek filmmaker Daphne Matziaraki; Julian Chambliss, a historian of urban and popular culture at Michigan State University; Edward Luce, the Washington correspondent for the Financial Times and author of The Retreat of Western Liberalism; and C.J. Chivers, Pulitzer Prize-winning New York Times staff writer and author of The Fighters.

Story in the Public Square provides audiences the opportunity to hear compelling stories, and learn the story behind the stories in an accessible format where the hosts listen rather than lecture. The program offers a refreshing alternative to the standard news and public-affairs fare. The show is produced by the Pell Center and presented by Rhode Island PBS via NETA, the National Educational Telecommunications Association.

The audio version of the series is broadcast multiple times each weekend on SiriusXM’s popular P.O.T.U.S. (Politics of the United States) channel. Story in the Public Square won a 2018 Telly Award for excellence in general politics/commentary for the final episode of its first year on the air on Rhode Island PBS, and the program is supported by weekly podcast versions and Miller’s regular Inside Story columns for The Providence Journal.

Find “Story in the Public Square” on your local public television channel!