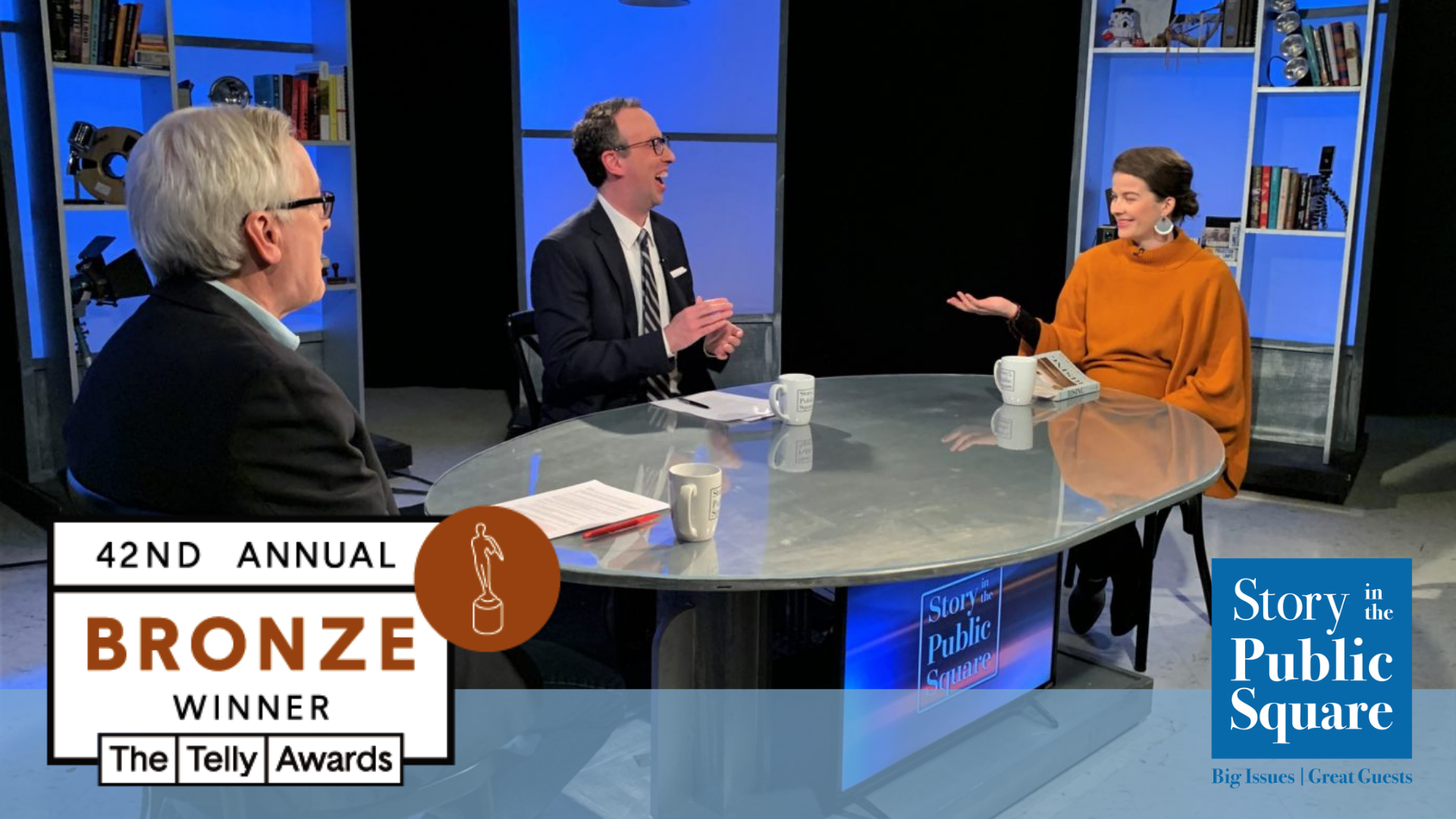 NEWPORT, RI (May 25, 2021) – “Story in the Public Square” has won bronze for excellence in Public Interest Television in the 42nd Annual Telly Awards, the fifth Telly Award win for the nationally-broadcast show.

This year, “Story in the Public Square” was honored with a bonze award for its 2020 episode featuring Elizabeth Rush, author of “Rising: Dispatches from the New American Shore,” a finalist for the Pulitzer Prize in General Nonfiction and the 2020 Reading Across Rhode Island selectee from the Rhode Island Center for the Book.

“I’m simply humbled by this honor,” said Jim Ludes, co-executive producer and co-host. “The last 15 months have been so hard for so many people. We’ve been grateful that we could simply continue to produce the show and work with our great team.”

“This means the world to us,” said G. Wayne Miller, co-executive producer and co-host. “After every episode, Jim and I talk about how lucky we are to be able to bring these guests to our audience.  We’re grateful to every single one of them.”

“Story in the Public Square” won both a Silver and Bronze award in the 41st Annual Telly Awards for its 2019 episode featuring Daniel Okrent, prize-winning author of “The Guarded Gate” on the remarkable history of the bigotry that lay at the heart of the Immigration Act of 1924 and its 2019 episode with Dr. Mona Hanna-Attisha, author of “What the Eyes Don’t See,” a memoir of her role in exposing the water crisis in Flint, Michigan. The show also won Bronze in the same category in the 40th Annual Telly Awards for its 2018 episode on the death penalty featuring Sr. Helen Prejean, the author of “Dead Man Walking,” and in the 39th Annual Telly Awards with a Bronze for its 2017 end of year special featuring Dr. Evelyn Farkas.

“Story in the Public Square” is broadcast more than 380 times each week on public television stations across the United States. Locally, the show can be seen on Rhode Island PBS on Sundays at 11 a.m. and is rebroadcast Thursdays at 7:30 p.m. An audio version of the program airs Mondays at 2:30 a.m. ET, and Saturdays at 8:30 a.m., 4:30 p.m. and 10:30 p.m. ET on SiriusXM’s popular P.O.T.U.S. (Politics of the United States), channel 124. “Story in the Public Square” is a partnership between the Pell Center at Salve Regina University and The Providence Journal.

Established in 1979, the Telly Awards honor excellence in video and television across all screens. The 42nd annual Telly Awards received a 15 percent increase in entries from the previous year. The growth was driven by a significant rise in remote and virtual productions, with many brands taking to animation for the first time. Winners are selected from over 12,000 entries from all 50 states and five continents and judged by an industry body of over 200 leading video and television experts from some of the most prestigious companies in entertainment, publishing, advertising, and emerging technology, including executives from Dow Jones, Duplass Brothers Productions, WarnerMedia, NBC News, A&E Networks, ESPN Films and Vimeo, to name a few.

The full list of the 42nd Annual Telly Awards winners can be found here.