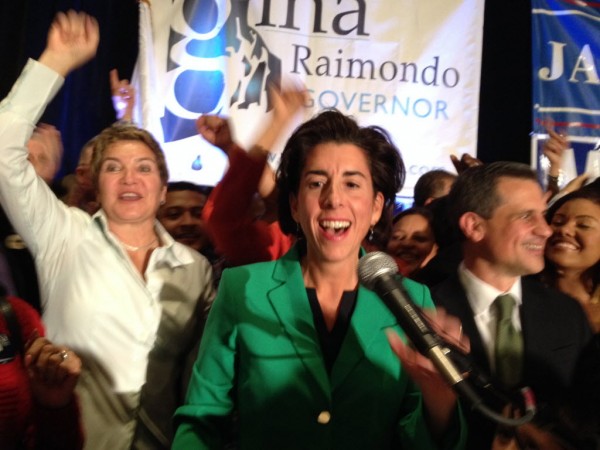 NEWPORT, RI — The 2014 gubernatorial election, won by Democrat Gina Raimondo, has been chosen as the Pell Center Rhode Island Story of the Year by a panel of print, broadcast and online media professionals in the state.

“The designation of the Pell Center Rhode Island Story of the Year goes to the public narrative with the strongest impact on public understanding in the state during the previous 12 months,” explains Pell Center Executive Director Jim Ludes.

“The path Gina Raimondo has followed makes for a compelling American story,” says G. Wayne Miller, Story of the Public Square director and Providence Journal staff writer. “The daughter of a working class family from Smithfield, Raimondo graduated from Harvard College, became a Rhodes Scholar, and then earned a law degree from Yale. She went into the venture-capital business before winning election in 2010 to State Treasurer, a position she used to reform the state’s broken pension system.”

The Local Story of the Year was determined by a two-step process that began with nominations by a panel of 16 judges from Rhode Island print, broadcast and online media, and was concluded with voting on a ballot of the three most-nominated stories. The two runners-up were the federal/ state raid on the State House office of House Speaker Gordon Fox, and his subsequent fall from power; and the race for Providence mayor, in which Democrat Jorge Elorza defeated Republican Dr. Dan Harrop and Independent Buddy Cianci, who failed in his comeback bid.

Among the other notable stories that were nominated were: sex trafficking, drug overdoses and addiction, the possible threat of Ebola, the economic squeeze on the state’s middle class, the fight over tolls on the Sakonnet River Bridge, the continued fallout from 38 Studios, and the changing Rhode Island media landscape.

Story of the Year is awarded each year as part of the Pell Center’s Story in the Public Square initiative—a partnership between the Pell Center at Salve Regina University and The Providence Journal to study, celebrate, and tell stories that matter.  Readers can weigh in on the 2014 selection on Twitter, @pubstory, or Facebook, www.facebook.com/StoryInThePublicSquare For more information on Story in the Public Square, visit publicstory.org.