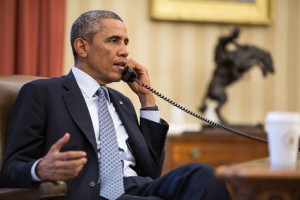 Newport, RI—“Emperor Obama” has been named the 2014 National Story of the Year by the Pell Center at Salve Regina University.  The designation goes to the public narrative with the strongest impact on public understanding in the previous 12 months.

“The story of presidential over-reach has been repeated for years, but in 2014, Republican opponents of President Barrack Obama used it successfully to gain control of both houses of Congress,” said Pell Center Executive Director Jim Ludes.  “It was a tightly crafted narrative used for political effect, and it resonated with a lot of the American public.”

The 2014 winning narrative was simple—President Barack Obama, frustrated by his inability to advance his agenda in Congress, has turned to executive action to advance an agenda he cannot legislate.  From healthcare to immigration, the President has usurped Congressional authority and concentrated power in his own hands, at the expense of the Constitution of the United State of America.

“We are not passing judgment on the veracity of any Story of the Year,” said G. Wayne Miller, Director of Story in the Public Square at the Pell Center and a reporter at The Providence Journal. “We are looking at the impact of that story on the public dialogue—and the story of ‘Emperor Obama’ was critical to Republican electoral success in 2014 and may define the president’s last two years in office.”

“President Obama has spoken himself about his willingness to use executive authority to advance issues he feels are important—issues like environmental regulation and immigration reform,” continued Ludes.  “The record of executive waivers of certain elements of the Affordable Care Act further advanced the narrative.”

In fact, at his first cabinet meeting of 2014, President Obama struck a defiant tone after five years of frustration with Congressional inertia:

[…] I’ve got a pen and I’ve got a phone — and I can use that pen to sign executive orders and take executive actions and administrative actions that move the ball forward  […] So one of the things that I’m going to be talking to my Cabinet about is how do we use all the tools available to us, not just legislation, in order to advance a mission that I think unifies all Americans.[1]

Congressional Republicans as well as conservative commentators and media outlets characterized the president’s use of executive power with discipline, effectively creating a narrative that casts anything President Obama does in the face of an inflexible Congress as dangerous to the Constitution.  As an example, Breitbart.com, a right leaning website, compiled a photo-essay entitled “24 Time the Internet Crowned Obama Emperor.”