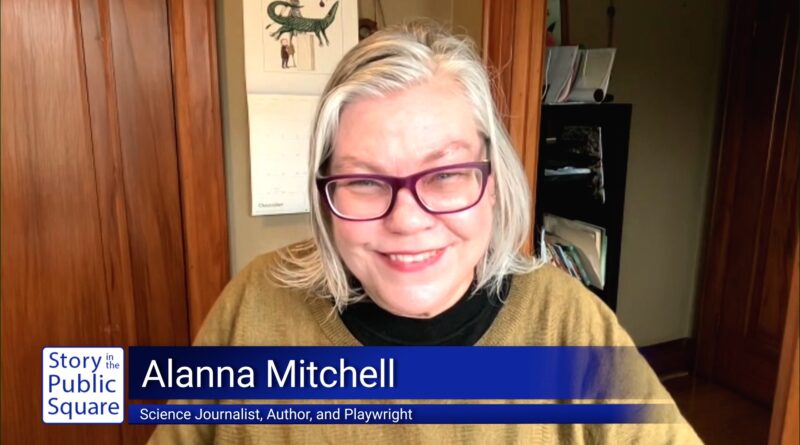 In an age of fake news and so called “truthiness,” the world sometimes feels untethered from reality.  Today’s guest uses her reporting and storytelling to ground her audience in science, even while her words reconnect us to our shared humanity and our relationship to the natural world.  She’s Alanna Mitchell, this week on “Story in the Public Square.”

Mitchell is a Canadian journalist, author and playwright who works at intersection of science, art and society.  Her book, “Sea Sick: The Global Ocean in Crisis,” was an international best seller that won the U.S.-based Grantham Prize for excellence in environmental journalism in 2010.  She turned it into a one-woman play in 2014 and has been performing it internationally since then.  The theater adaptation was nominated for a Dora award in Toronto for outstanding Indie play.  Mitchell was a playwright-in-residence at The Theatre Centre while she adapted her book, “Malignant Metaphor: Confronting Cancer Myths: A Memoir” into a play.  The book also won the $10,000 Lane Anderson Award for best Canadian science book written for adults in 2015.  She is also the author of “The Spinning Magnet: The Force that Created the Modern World and Could Destroy It,” about the Earth’s magnetic field.  Mitchell’s journalism has appeared in the New York Times’ science section, CBC’s Quirks & Quarks, National Geographic, The Guardian, GQ India, The United Church Observer and Canadian Geographic Magazine.  She has also made radio documentaries for CBC and has given talks on climate change, ocean change, cancer, John Franklin’s expedition, evolution, Charles Darwin, neonic pesticides and the earth’s magnetic field.

On this episode of “Story in the Public Square,” Mitchell discusses what drew her to science writing and sharing her experiences with science through storytelling through her performances.