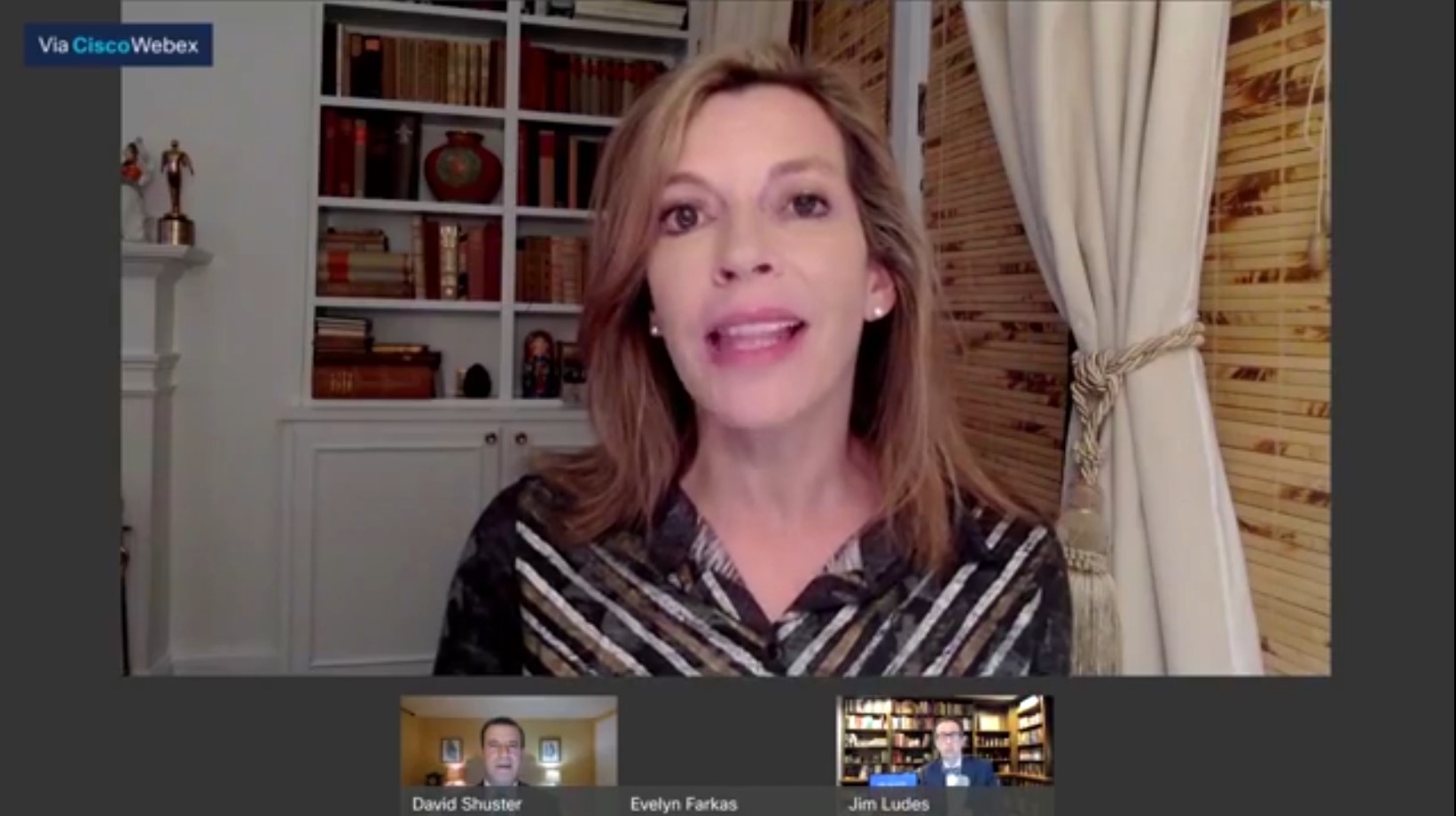 The American people may be as divided as they ever have been politically, but there is one thing that all people in this country can agree on: the 2020 Election was an emotional rollercoaster. On Tuesday, November 12, Pell Center Executive Director Dr. Jim Ludes met with David Shuster and Evelyn Farkas via a Facebook live event entitled, “What’s Next: Discussing the 2020 Election Results” to debrief the Election of 2020 and what we should expect in the months before President-elect Joe Biden is inaugurated on January 20, 2021. In this hour-long event, Shuster and Farkas dove into audience questions to help us truly understand the current state of America.

Reporter and Emmy Award-winning broadcaster David Shuster believes the election was “unlike any election we have ever seen.” This is mostly due to the pandemic and the various ways that people had to vote, but also because participation in this election was the highest this country has ever seen. He believed Joe Biden would be the winner when it was all said and done, but was still surprised about how close the final margins were as vote counting continued to wrap up across the country. Former American National Security Advisor in the Obama administration, Evelyn Farkas, shared her thoughts in which she agreed that the results were surprising because of how close the vote was after Biden was projected to be the clear winner weeks ago.

The importance of voting has never been more important. For Democrats, the African American population, and especially women, was a key factor in many states. For Republicans, surprisingly enough, the Latino and Hispanic vote were extremely important for their candidate Donald Trump in many states. For President-elect Biden and the Democratic party, it is imperative in future elections to appeal to the Latino and Hispanic population if they want continued support. Many voters around the country agree that the American government is “bleeding and needs to be fixed” and with President-elect Biden set to take office, it may just happen. However, it is important to highlight the fact that more people voted for former Vice President Biden to replace President Trump. The level of excitement that the country saw in the election of former President Barack Obama in 2008, for example, was not readily apparent in the Election of 2020.

Farkas believes that we should be more worried about how Donald Trump deals with the loss rather than the transition that Joe Biden faces when he is set to take over in January of 2021. There are those in the Republican Party that will continue to avidly support President Trump’s efforts to undermine the results of this election but there are believed to be a few Republicans who understand how dangerous it is to continue to divide the country and the two parties like President Trump is doing now. All Joe Biden needs to do right now, according to Shuster, is worry about filling up positions in his cabinet and also to reassure the American public that he is not concerned with the President’s baseless claims and that we, as Americans, should continue to have faith in our democracy.

The American Election of 2020 has drawn not only national attention, but worldwide attention as leaders congratulate Joe Biden on his win and promise to help the United States rebuild what many believe Donald Trump damaged. In the Middle East, Israeli Prime Minister Benjamin Netanyahu has also shown his support for Joe Biden despite working closely with President Trump to address Israel’s lingering conflicts with Iran. In Russia, we may not see Vladimir Putin endorse Mr. Biden or abandon support of President Trump only because he fears what Trump would say or do in response.

One of the most interesting questions of the event was “what lessons, if any, have been learned that would forestall the emergence of a more intelligent, ideologically driven, and more competent version of Trump in the future?” Shuster noted that even with all the problems and lawsuits against Mr. Trump in his presidential run, he still received 5 million more votes in this election. There is no real answer, but he urges the American people to be more aware about which candidate they choose and to have faith in American democracy. To bridge the gap between our parties in America, the American people and news media outlets alike need to unite to share common news that benefit everyone, not just specific parties and candidates. Both David Shuster and Evelyn Farkas are optimistic about the future of America, and with President-elect Biden in office, the country hopes he can address the coronavirus, deal with immigration issues, work on proper climate change measures, and most importantly, unite the American people.