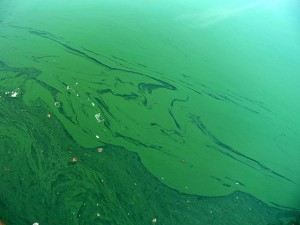 This is climate change: Ohio’s water crisis was a manmade disaster | Salon

Two commentaries from this past week – one from Salon and one from the Center for Economic and Policy Research – remind us that the choices we make as a society, i.e. through public policy, have profound consequences in every area of our lives. In Ohio, hundreds of thousands of people lost access to fresh water thanks to a massive algae bloom in Lake Erie, and the Salon writer points out that our choices regarding agriculture, infrastructure and energy use have all contributed to creating the conditions for the problem: Our current agricultural regulations allow excessive phosphorous to build up in Lake Erie and elsewhere, inadequate sewer systems can’t handle increasing rainwater and therefore lead to overflows into natural waterways, energy policy supports fossil fuel use which is contributing to a shifting climate that includes warmer temperatures and greater rainfall in certain areas. As the Salon writer points out: “What happened this weekend in Ohio can’t be called a natural disaster.” In a commentary with interesting parallels, Dean Baker of CEPR points out the policy choices that have created the conditions for a rising gap between those at the top of the US economy and the rest of us – a series of choices that include our trade policies, our support of the financial investment industry, and even our patent laws. The implication of both of these pieces is that if we want good drinking water, a reasonably equitable society, or other goals, we need to pay attention to the (policy) choices we are making in these areas.-Joseph Grady, Senior Fellow for Public Policy

The Politics of National Security Misses the Point

China to build lighthouses on five isles in defiance of U.S. call | Reuters

If you turned on one of the cable news networks this week, you saw a lot of breaking news about two American Ebola patients being transferred to hospitals in the United States.  It’s hard not to be drawn in to watch people in bio-hazard suits and wonder what they must be thinking and feeling in that moment.

But lost amidst that flurry of fear-laced news were important developments in Ukraine, where investigators still have not finished searching the scene of MH17, where Russian forces are again massing on the border, and where Vladimir Putin seems determined to test the resolve of the West.

Also lost this week is the latest chapter in the new, dark age descending on Iraq.  40,000 civilians are trapped on Mount Sinjar where they have fled the advance of Islamist militants and fear annihilation because of their faith.  This is only the latest account of a religious minority in Iraq facing conversion or death at the hands of extremists.

And then in the Pacific—the simmering crisis that never seems to make the headlines—China announced this week it would build lighthouses on islands it claims in the South China Sea.  The problem with these aids to navigation stems from the fact the islands are also claimed by Vietnam.

So it’s not really any wonder that the President’s foreign policy approval ratings have taken a hit.  Everyone who views this solely in the context of the horse race—specifically the 2014 mid-term elections—however misses the real significance of these numbers.

Whatever the merits of the Obama administration’s approach to foreign policy, the President has failed to articulate a vision of America’s role in the world that seems worthy of the moment we find ourselves in and the challenges emerging from East Asia, the Middle East, Africa, and our own Southern border.  While he has eschewed the transformative mission of his predecessor (Bush 43 invaded Iraq; Obama restrained the hawks in his own administration on Syria), he has been willing to intervene for humanitarian purposes (Libya).

Yet in failing to pursue a strategy, the President not only risks knee-jerk reactions to long-term challenges, he fails to explain to the American people—and, in fact, publics around the world—just what the United States believes and what it values.

The bottom line is this: Secretary of State John Kerry has immersed himself in the most dramatic issues and crises in the world today.  But deploying John Kerry is not a strategy—it’s crisis management.  Here, in the sixth year of the Obama presidency, the administration should be more capable than that.- James Ludes, Executive Director