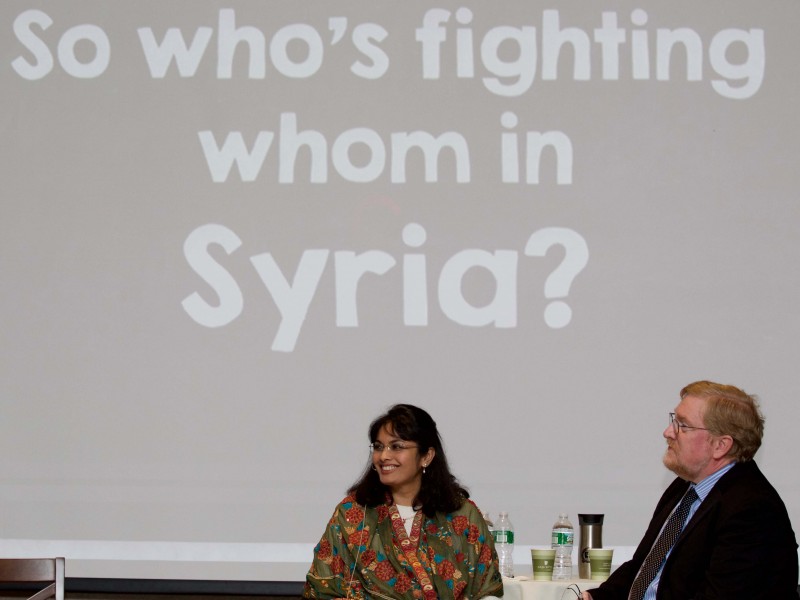 On December 2, 2015, the Pell Center for International Relations and Public Policy hosted its final lecture of the fall semester titled “The Legacy: What’s Next for U.S. Policy in the Middle East”. The lecture featured two experts from the U.S. Naval War College, Hayat Alvi and Timothy Hoyt and attracted one of the year’s largest crowds despite rainy weather outside. Moderated by Pell Center Executive Director Jim Ludes, the lecture was presented as an opportunity for the community to engage and further understand the complexities of, arguably, one of the most controversial issues America’s foreign policy makers have ever faced. In a region plagued by civil war, religious extremism and general uncertainty, maintaining U.S. interests while remaining humanitarian has become an increasingly entangling task. The speakers began with a background and relevant history of events in the Middle East since the Arab Spring and then delved deeper in order to discuss the interests of the war’s major players, the disconnects between them, and what we can do as a country moving forward.

First to speak was Hayat Alvi, professor of the Theater Security and National Security Decision-Making courses at the U.S. Naval War College. Dr. Alvi has been a part of the publication of multiple books on the subject of The Middle East, including a work in progress, Nonviolent Activism in Islam:  The Message of Abul Kalam Azad. In many of the conflicts in the Middle East today, the major players are fundamentally disconnected as a result of their self-interest. Dr. Alvi argues that these disconnects come from confusion surrounding three main themes which have characterized this region since the Arab Spring, of which only one has clear divisions. The first theme is political disillusion, the next is the issue of borders and the last is the Sunni-Shia rivalry. According to Dr. Alvi, political disillusion is a direct result of the dissemination of ideas from the Arab Spring, while the deterioration of borders came afterwards and is more intimately connected to ISIS itself. When combining these two issues alone, it is plain to see that lines have been blurred to the point where it becomes impossible to decipher who is truly fighting whom. But, in reality, these two issues have origins in the relatively clear cut sectarian rivalry between the Sunni and Shia of Saudi Arabia and Iran.

These themes are what The United States is up against when it comes to the task of creating effective foreign policy because “there is no purely military solution to ISIS”. For the most part, the war is ideological. All of the major players maintain their own interests and are attempting to design tactics which can reestablish order while simultaneously protecting alliances and investments. According to Dr. Alvi, the U.S. legacy of geopolitical entanglements in the Middle East come from things like the proxy battles of the Cold War, the protection of the Suez Canal, the sovereignty of Israel, as well as counterterrorism and democracy promotion. Having been connected to these things in the past, the U.S. has become attached to maintaining their legacy in the future. The major problem here is that the other actors in this region do not hold the same priorities that we hold. Dr. Alvi says that the key disconnects caused by American self interest in favor of total reality are: a plan to remove ISIS that ignores Assad, U.S. weapons falling into the wrong hands, American military presence without combat orders, and a lack of interest in the agendas of other regional influences. Dr. Alvi concludes that the United States may be capable of creating simpler policy conclusions, if it is able to grasp the fact that hanging onto our ideology is a contributing factor to negative outcomes.

Next, Dr. Alvi passed the discussion to her colleague Timothy Hoyt. Dr. Hoyt is an expert in International Relations, focused upon the topics of international security and military affairs which he teaches in his classes as well as discusses in his published work, including over 50 articles and chapters. Dr. Hoyt continued Dr. Alvi’s analysis by stating that the “fundamental problem that will not go away easily is that almost all of the countries in the region have different priorities than we do”. He continued his discussion with an analysis of the region’s major influencers including Iraq, Turkey, Israel, and Russia. For the most part, Dr. Hoyt decides that among these nations, none are approaching the situation with the same goal in mind, especially from a military standpoint. The United States has a complex military history with nearly all of the countries involved, making progress difficult. Alliances with both Turkey and Israel, as well as a working relationship with Russia have caused a lot of instability. But, if what we desire is the opposite, we must come to a more uniform approach. Hoyt suggests, that we find a way to reduce the effects of the arms race and focus more on ideological warfare. If not, “it is possible that Islam has begun its 30 years war”.

In closing, Alvi and Hoyt reiterated a common theme which is general uncertainty. The conflict in the Middle East is complex at every level and its principle actors’ motivations are changing every day. So, grappling with policy to meet the region’s needs has become a monumental task with no simple solution. Bringing the title of the night’s discussion into focus, the legacy of this conflict is what has become the most troubling. After all, we can only guess where we are going based on where we have been. – Hannah Lussier