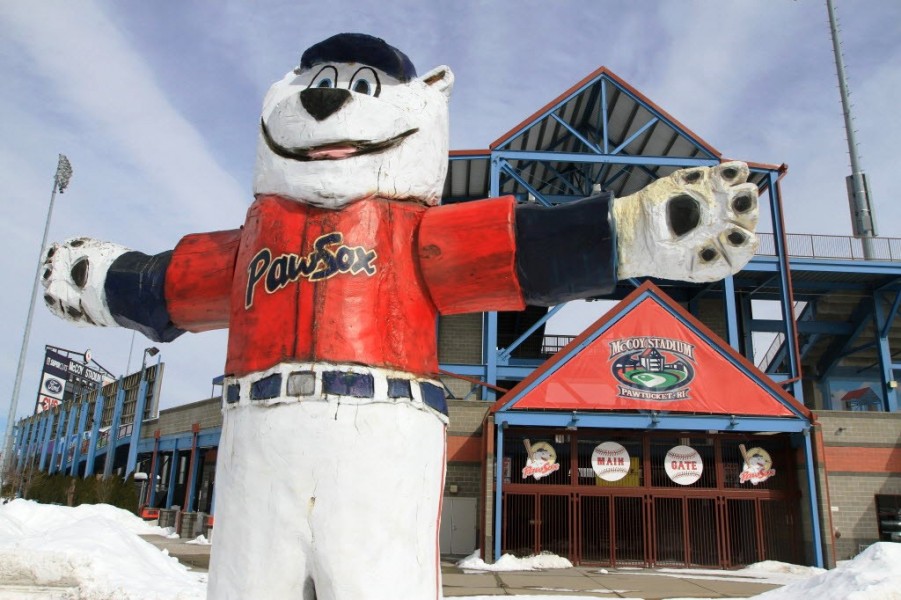 NEWPORT, R.I. – The sale of the Pawtucket Red Sox and the team’s possible move from that city, potentially to another state, has been selected as the Pell Center’s Rhode Island Story of the Year. The Triple-A affiliate of the Boston Red Sox, the Pawsox have been a Rhode Island sports and cultural institution for decades.

So it was fitting that the February announcement of the sale of the team to a group headed by the late attorney James J. Skeffington and former Red Sox president and CEO Larry Lucchino surprised, if not stunned, many in southeastern New England. The events that followed kept the Pawsox in the news for the rest of the year. And the story is not over.

Race relations and the Black Lives Matter movement, and I-195 development, were runners-up for local story of the year, as voted by a panel of 12 judges from Rhode Island media and academia. This is the second year the Pell Center has named a local story. The Center will announce its third National Story of the Year next week.

“As always, there was no shortage of candidates for 2015,” said G. Wayne Miller, Story of the Public Square director and Providence Journal staff writer. “But it was the opinion of the judges that the many elements of the story, which went beyond sports into the economy and culture – indeed, to a discussion of how Rhode Islanders view their state – made it the winner.”

Said Robert Hackey, Providence College professor and member of the Story in the Public Square’s advisory Story Board: “The state’s chaotic response illustrates the lack of a unified economic development strategy. Once it became clear that the owners wanted to move, communities jumped into the fray in an economic development version of “The Hunger Games.” The prospect of a move pitted Warwick, Providence, and Pawtucket against each other, with the constant threat of a move out of state in the background.”

Among the developments that gave the Pawsox story such breadth: Skeffington, seen as a key player in keeping the team in Rhode Island, died of an apparent heart attack in May; the new owners wanted to move the team to I-195 land, but failed to win political support; and cities including Worcester, Fall River and Springfield, Mass., expressed interest in wooing the team.

Retired Providence Journal political columnist M. Charles Bakst said, “The Pawsox saga had something for everyone: sports, politics, and finance, to be sure, but also a cast of heavy hitters and grass roots organizers, a skeptical public scarred by the bitter legacy of the 38 Studios scandal, and, throughout, suspense and climate shifts ranging from ‘This is a done deal’ to ‘Maybe some other Providence site’ to ‘Maybe Pawtucket after all.’ This 2015 news coverage of the Pawsox story will be read carefully in future years by pols and sports executives and business/marketing MBA candidates: a case study in how NOT to get a stadium built.”

The Local Story of the Year was selected during a two-step process that began with nominations by a panel of 13 judges, and was concluded with voting on a ballot of the three most-nominated stories. Stories that were nominated but did not make the final ballot included the sentencing of former House Speaker Gordon Fox, the extreme weather of February and March, the conviction of former New England Patriots player Aaron Hernandez, gun violence, the release of 38 Studios documents, educational testing, the debate over truck tolls, and the swearing-in of Gina Raimondo, Rhode Island’s first woman governor.

Story of the Year is awarded annually as part of the Pell Center’s Story in the Public Square initiative—a partnership between the Pell Center at Salve Regina University and The Providence Journal to study, celebrate, and tell stories that matter. Last year’s winner was the 2014 gubernatorial election, won by Raimondo.

Readers can weigh in on the 2015 selection on Twitter, @pubstory, or Facebook, www.facebook.com/StoryInThePublicSquare For more information on Story in the Public Square, visit publicstory.org.

Photo courtesy of the Providence Journal.