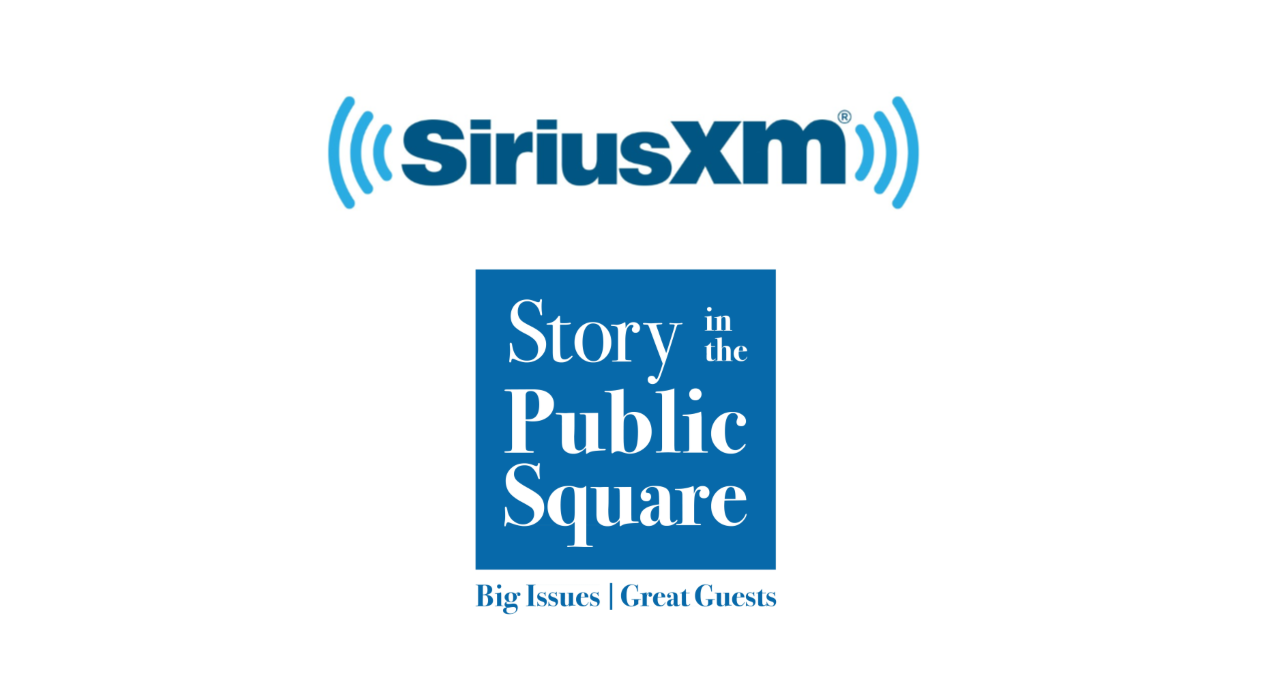 Jim Ludes, Executive Director of the Pell Center at Salve Regina University, and G. Wayne Miller, senior staff writer at The Providence Journal, host “Story in the Public Square,” which features spirited conversations with scholars, diplomats, artists, and storytellers of all kinds, to help audiences better understand the stories that shape public life in the United States.

“Since ‘Story in the Public Square’ launched in 2017, we’ve been blessed to find a home on SiriusXM P.O.T.U.S.,” said Ludes. “This will be our first presidential-election-year on the channel and we are excited to examine the narratives that will be central to the 2020 campaign.”

“The heart of ‘Story in the Public Square,’ remains our guests,” said Miller. “Whether we’re talking with a mental health professional, an editorial cartoonist, a scholar, or a photographer, we are always amazed at the profound insights and artistry of our guests and grateful for the opportunity to host them.”

“Story in the Public Square” airs Saturdays at 8:30 a.m. & 6:30 p.m. ET, and Sundays at 4:30 a.m. & 11:30 p.m. ET on SiriusXM’s P.O.T.U.S. channel 124.  Episodes are also broadcast each week on public television stations across the United States.  In Rhode Island and southeastern New England, the show is broadcast on Rhode Island PBS on Sundays at 11 a.m. and is rebroadcast Thursdays at 7:30 p.m.  A full listing of the national television distribution, is available at this link.

“Story in the Public Square” is a partnership between the Pell Center at Salve Regina University and The Providence Journal. The initiative aims to study, celebrate, and tell stories that matter.  SiriusXM P.O.T.U.S. channel 124 features non-partisan political talk radio. SiriusXM is the world’s largest radio company with more than 34 million subscribers, offering commercial-free music; premier sports talk and live events; comedy; news; exclusive talk and entertainment, and a wide-range of Latin music, sports, and talk programming.

First published in 1829, The Providence Journal, now owned by Gannett, is the oldest continuously published daily newspaper in the United States.

For more information about “Story in the Public Square,” please visit http://pellcenter.org/story-in-the-public-square/.

The genetics revolution is already reshaping healthcare—and most people see in it the potential for healthier children, healthier adults, and less disease. Jamie Metzl argues that the same technology making progress possible has the potential to saddle the world with a complex array of thorny ethical questions that will affect everything from human sexual reproduction to national security.

Nothing saps the confidence of the uninitiated quite like the reality of actually becoming a parent.  KJ Dell’Antonia tells parents to cut themselves some slack and to worry less about the many hours each day that teenagers spend on screens.

In this era of “fake news,” disinformation, and social-media distortion and falsehood, professional expertise is under fire.  U.S. Naval War College Professor Tom Nichols, author of The Death of Expertise: The Campaign against Established Knowledge and Why it Matters, explains why these assaults on truth threaten American democracy.

On many issues today, Americans are bitterly divided. Many politicians are unwilling to reach across the aisle, and fact-based attempts to bridge these gaps seem to fail. Linda Tropp, award-winning author and professor of social psychology at the University of Massachusetts, argues that face-to face connections and emotion, not data and statistics, can bring disparate groups together.