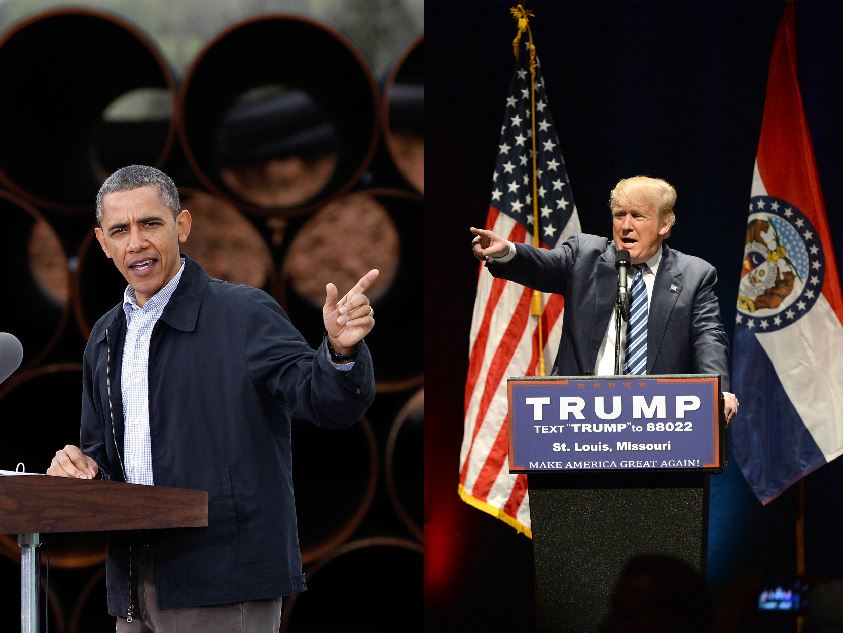 Just how much do these men have in common?

In Donald Trump’s Worldview, America Comes First, and Everybody Else Pays | The New York Times

The Obama Doctrine | The Atlantic

A terrorist bombing in Brussels, Belgium, last week took at least 35 lives, as of this writing.  Lost among the proper focus on this latest attack on the West were two important interviews given by the frontrunner for the Republican nomination Donald Trump.

Most of the punditry has criticized Trump for a complete lack of awareness about the post-Second World War world-order.  He questions America’s commitment to European and Asia security.  He says that NATO has to pay its own freight.  In Asia, the candidate said that if Japan and South Korea have to develop their own nuclear weapons because the United States was pulling back, then so be it.  In two interviews, someone who is a very credible candidate for president swept aside 60 years of American foreign policy consensus that said more nuclear armed states is bad and that the United States must remain preponderant in both Europe and Asia.

The bottom line for Trump is that the United States, under his leadership, won’t coddle free-riders: governments in Europe and Asia that shortchange their own investments in security because the United States has their back.  The burden in these scenarios to police the world, to oppose Russia’s resurgence in Europe and China’s assertiveness in the South China Sea all falls to the American military and taxpayer.

What’s remarkable is that while much more politic than Trump, President Obama’s own views of the world may not be all that different.  In a remarkable essay in The Atlantic, Jeffrey Goldberg describes “The Obama Doctrine.”  Specifically, in examining the decision not to attack Syria after its President Bashar al Assad used chemical weapons against his own citizens, Goldberg explains that he has “come to believe that, in Obama’s mind, August 30, 2013, was his liberation day, the day he defied not only the foreign-policy establishment and its cruise-missile playbook, but also the demands of America’s frustrating, high-maintenance allies in the Middle East—countries, he complains privately to friends and advisers, that seek to exploit American “muscle” for their own narrow and sectarian ends.”

America’s allies in Europe and Asia are vital to American national security, but that case has not been made effectively by either American or allied leaders in a long time.  Worse, there is a broad and generally accepted view—and one that is not completely inaccurate—that the United States does all the heavy lifting in the world.  This message resonates with Americans of every political stripe who are exhausted after 15 years of nearly persistent conflict, who have seen middle class incomes shrink, and who fear America’s best days may be behind it.  President Obama won’t say it quite so pointedly, but his policies have clearly signaled in Europe and Asia that America’s allies need to do more.  Trump simply says it. – Executive Director Jim Ludes