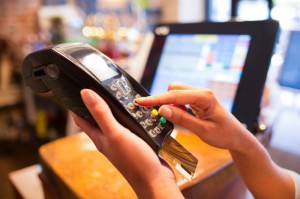 Is The US Finally Accelerating A Move To Chip And Pin? | Forbes

President Barack Obama recently signed an executive order requiring the federal government to issue new “chip-and-PIN” credit and debit cards, which would replace the outdated technology of magnetic strips and signatures. The administration described the order as part of an effort to help “drive the market towards more secure payment systems,” especially in the wake of several high-profile breaches in the past few months.

Despite the initiative, the US remains over a decade behind many other countries in adopting chip and pin systems and is also the only one in which the market for counterfeit credit cards continues to grow. In Europe, for example, microchip-enabled credit cards and PINs—which are designed to make it harder for cyber thieves to steal payment card information—have been used for years.

So, why has this technology taken so long to reach the US?

As The Economist explains, there are significant upfront costs to the shift—upgrading cards and card-readers would cost millions—but there are also technological and regulatory reasons. Technologically, American credit card companies in the ‘90s had a greater ability to detect potentially fraudulent purchases and stop them at the point of sale than their European counterparts, which provided a disproportionate incentive to switch to chip-and-PIN in Europe. And from a regulatory standpoint, the incentives are reversed. While European credit-card companies are responsible for paying most of the costs of fraud, American credit-card companies—which operate in a looser regulatory environment—have successfully passed on much of the cost of fraud to retailers and even consumers.

Unfortunately, Obama’s recent executive order does not appear to change the regulatory issue significantly because it only covered government-issued cards and the card-readers at federal facilities—private sector companies remain exempt. With retailers only expected to adopt the new technology next year, card companies appear poised to shift liability costs onto any bank or retailer that has not invested in the new technology. Lastly, it should be remembered this new technology—like all technology—is not immune to cybercrime. For example, it does not address the issue of malware that can affect the cash register systems or fraud in online purchases.

And so: what to do in the meantime?

Start setting up your Apple Pay account—if you have an iPhone 6, that is—or continue to use good old paper money!- Francesca Spidalieri, Fellow for Cyber Leadership

Wages and the Economy

A Washington Post blog post recently argued that American workers’ fears about the job market play a significant part in keeping their wages low. “Workers are so insecure that they’re afraid to abandon their present jobs for something better; therefore, companies don’t have to pay higher wages to retain them.” This “Insecurity” story is part of the larger picture of workers’ “bargaining power” declining (for a number of reasons, including lower union membership, globalization, etc.) – leading to lower wages across the board, relative to the cost of living. And these lower wages aren’t just a problem for workers and their families – they impact the economy more broadly. A recent Wall Street Journal piece pointed out that low wages hold back economic growth, because the main thing that drives growth is consumer spending. If consumers don’t have money to spare because their wages are low, “it is harder for them to make purchases ranging from refrigerators to restaurant meals that account for most of the nation’s economic growth.” It would seem that rather than wait for a better economy to happen, so that Americans can feel more confident, we need to find a way to reassure Americans that there are better jobs out there, if we want better recovery and a stronger economy.- Joseph Grady, Senior Fellow for Public Policy