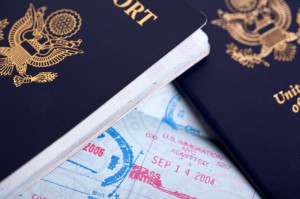 Immigration and the Economy

The data on white anxiety over Hispanic immigration: What drives American views on immigration is often not pretty | The Washington Post

Facts About Immigration and the U.S. Economy | Economic Policy Institute

A Gallup poll released last week says that Americans currently feel that immigration is one of the top problems facing the United States. The finding, the researchers point out, reflects recent crises related to Latin American children entering the U.S. – immigration provoked much less concern a few months ago.

A Washington Post discussion of perceptions of immigration, also from last week, points out that the ethnicity of the immigrants in the news is anything but incidental to how Americans process these stories. Specifically, experimental research shows that we are much more likely to react negatively to stories about Hispanic immigration than to hearing about immigrants from other backgrounds (e.g. Russian or Dutch). When focusing on Hispanic immigrants, Americans are more likely to prefer tougher laws, lower quotas and so forth. But a report from the Economic Policy Institute last week suggests that we need to rethink much of what we believe about immigrants, including unauthorized immigrants, and their effects on our society and economy.

While some Americans worry that immigrants are a drag on our economy, and are costing us tax money, the EPI analysis suggests that “unauthorized immigrants are a net positive for public budgets because they contribute more to the system than they take out.” For instance, these immigrants pay sales tax on everything they buy, and while they often do have withholdings taken out of their pay checks, they usually don’t apply for either the tax refunds they might be due at the end of the year, nor for various services that the withheld taxes help pay for. Regarding the economy as a whole, the EPI analysis points out that if all unauthorized immigrants were somehow immediately deported, “it would actually hurt, not help, the economy and the jobs situation” since these individuals “consume goods and services, thereby generating economic activity and creating jobs.”- Joseph Grady, Senior Fellow for Public Policy

What Pope Francis Really Said about the Crisis in Iraq | Vox

Evil, left unconfronted, has a way of winding up in lower-Manhattan on a beautiful Tuesday morning.  Anyone who questioned the true nature the ISIS threat merely needed to watch the news over the last month.  From Syria to Iraq, we saw forced conversions, crucifixions, and more, culminating in the horrific murder of American journalist James Foley this week.

A unique and historic consensus is emerging about the need to stop ISIS.  It includes the House of Saud, theocrats in Iran, and the Pope.  The reality is, however, that only the United States has the ability to marshal a true coalition to meet this threat.

In the days following the horrific killing of American freelance journalist James Foley this week at the hands of an IS (Islamic State) militant, it was reported that a ransom had been demanded in return for the release of Mr. Foley.

David Rohde, an investigative reporter for Reuters who has been kidnapped twice, wrote an opinion piece questioning whether the U.S. policy on not paying ransoms contributed to the killing of James Foley. In the piece, Rohde suggests that a lack of a unified policy between the U.S. and Europe is endangering civilians’ lives. This may be a factor. Yet, there is no simple answer when dealing with kidnappings, as noted in the Christian Science Monitor article below. These situations are made more difficult by the millions of dollars paid in ransom that are filling the coffers of terrorist organizations, reported recently by The New York Times.- Carolyn Deady, Fellow for Global Challenges