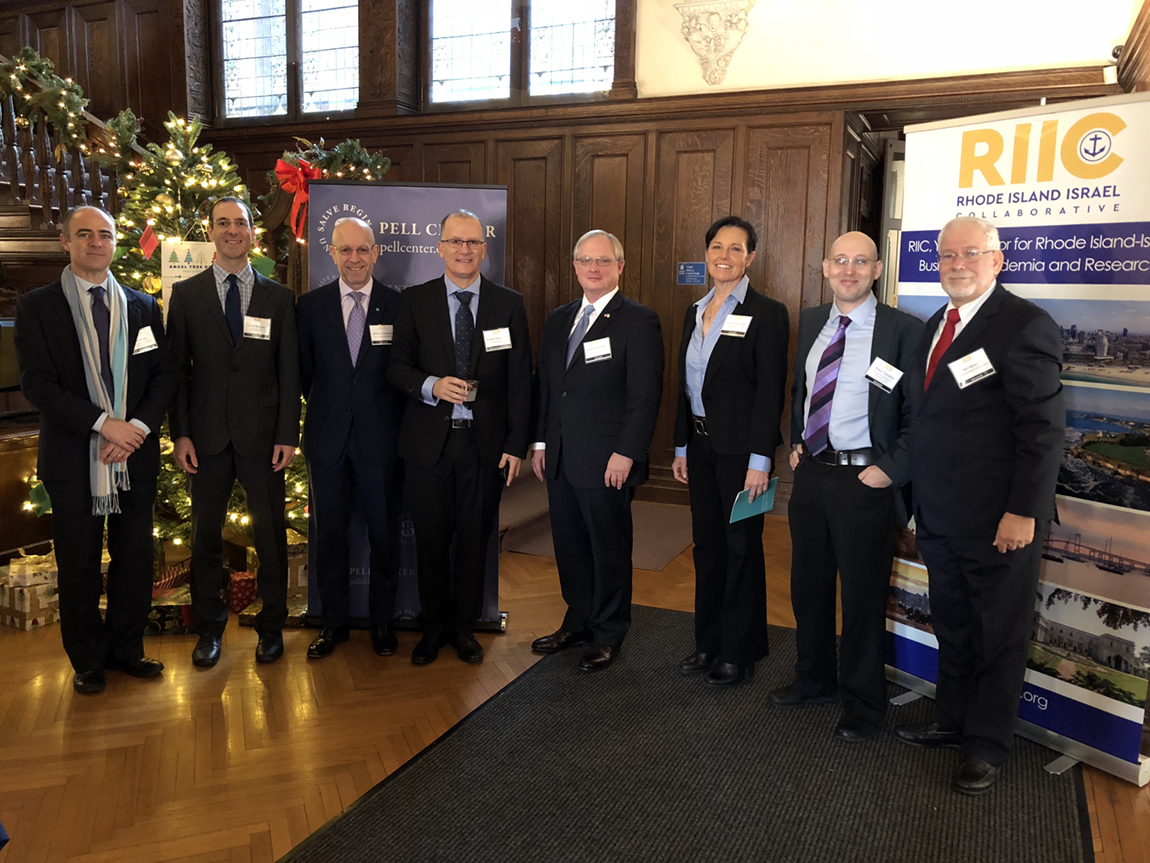 Senior corporate leaders, entrepreneurs, investors, government officials, military personnel, law enforcement, researchers, and faculty members from multiple organizations in New England and abroad, convened at the Pell Center at Salve Regina University on November 29, 2017 to participate in the first-of-its-kind conference in Rhode Island on Blockchain, Bitcoin, and Cryptocurrency. Senior officials such as the Israeli Economic Minister to North

America, Inon Elroy, the RI State Cybersecurity Officer, Mike Steinmetz, and representatives of the Consulate General of Israel were in attendance. The event, organized in partnership with the newly established Rhode Island-Israel Collaborative (RIIC), featured world-renowned experts from organizations at the forefront of these emerging technologies from the US and Israel, including the Israeli government, IBM, and Tel Aviv University.

As Mr. Avi Nevel, CEO and President of RIIC, stated: “Israel is now leading in cutting edge technology in cyber and fintech innovation, and it was a pleasure for our organization to cooperate with the Pell Center to bring together top experts in these fields, with the hope of making Rhode Island and Israel a hub for blockchain technology involving Israeli and Rhode Island companies and academic institutions.”

Just one day before the event, bitcoin experienced a meteoric increase from $9,800 to a high of $11,300 overnight, which brought much anticipation and curiosity for this conference.  (As of this writing, bitcoin is now trading at $15,800.)  This cryptocurrency was worth about $756 only last year. This exponential rise has sparked both interest and concerns about the technology behind it – blockchain – and all its possible applications across various industries including healthcare, banking, finance, legal, and even cybersecurity.

The event was moderated by Dr. Roey Tzezana, a renowned Israeli futurist, and author of multiple books on the subject. In his opening remarks, he talked about blockchain technology and its potential disruption to societies and organizations in the future and its potential impact on the new world order looking 20-30 years down the road.

Explaining the technology that underpins blockchain to non-IT experts is not an easy task. The conference keynote speaker, Ronen Siman-Tov, CTO of IBM’s AlphaZone Accelerator, described blockchain as a distributed ledger (or a permissionless distributed database or public record of transactions in chronological order) that is shared between participants across an established network. The technology is made up of a series of blocks with a new block added every time a new transaction is made. These transactions must be validated by entities within the blockchain network. No transaction can ever be erased from this chain of blocks making this technology tamper-proof, anonymous, and unchangeable which in turns brings a heightened sense of trust and security to every party involved in the network. This also makes it easier to go back and audit all transactions that have ever been executed within the network. In the words of Siman-Tov, “what happens in the blockchain, stays in the blockchain.”

“Business will require four things in order for blockchain to work,” continued Siman-Tov, “a shared ledger, smart contracts, privacy, and trust.” He anticipates that blockchain will ultimately allow parties to make transactions without a third-party intermediary such as an accountant or lawyer, making it a trustworthy and cost-saving technology.

Mr. Siman-Tov also explained in his GoLocal Live interview, that there are multiple potential uses for blockchain beyond the financial world and across numerous industries. For instance, the Food Safety Consortium is a current use case of a network based on blockchain and its main purpose is to help prevent food fraud and ensure product quality by tracing the food’s activity throughout the supply chain. Walmart, Nestle, Tyson, and Unilever are some of the key players in the Food Safety Consortium blockchain network. Many believe that what the internet did for communications, blockchain will do for transactions and that this technology will “create extraordinary opportunities for businesses to come together in new ways – creating new value, optimizing ecosystems, and reducing risks.”

As with the internet and any other new technology, however, there are risks involved and some that have yet to be realized. Dr. Chris Demchak, RDML Grace M. Hopper Chair of Cyber Security Studies and Director of the Center for Cyber Conflict Studies (C3S) at the U.S. Naval War College, highlighted some of these potential pitfalls. She stated that “anything that can be coded, can be corrupted,” and one point of failure will still be the human factor. Since blockchain networks are written in code, the network is only as good as the programmer who develops it and, as we have learned with the internet, there will be vulnerabilities in the code that can be exploited by malicious actors. She also warned that blockchain may not be the right answer for everything and may not be widely useful beyond originating financial transactions. Another potential issue with blockchain is scalability. As more transactions are made on the blockchain network, it will become harder to process them and scale over time. This is a consequence of the fact that new ‘blocks’ will continue to be added on top of older ones (i.e. the size of the blockchain will confinue to grow), and that every fully participating node in the network must process every transaction, which in turns requires increased storage, bandwidth and computing power. This will lead to increasingly longer transaction-approval times. Multiple researchers and experts in the field are currently working on possible solutions, but until we figure out how to scale the blockchain, we will be limited to how fast and wide this technology can actually grow.

As with all new technologies, there are still kinks to be worked out and patched, but many of these issues can only be realized through real-world implementation and application of the technology. With that being said, all the participants at the Pell Center event agreed that the cost-saving impact of blockchain will be significant for many industries.

After the formal part of the program ended, attendants participated in a dedicated workshop for different industry sectors, including finance, healthcare, government, defense sector, and cybersecurity. They discussed the potential implementations of blockchain technology in their respective organizations and devised a preliminary strategy to adopt it.

This conference was part of the Pell Center’s Rhode Island Corporate Cybersecurity Initiative (RICCI), an ongoing effort aimed at bringing together senior leaders from various sectors in Rhode Island who can affect change and make the state more secure and resilient to cyber threats. The Rhode Island-Israel Collaborative (RIIC) is a new non-profit organization dedicated to fostering and strengthening trade, business, academic exchange, science, and research between the state of Rhode Island and Israel to mutually benefit their economies and communities. RIIC aims at building and supporting relationships between government organizations, businesses, entrepreneurs, investors, members of academia, and the research community in Rhode Island and Israel. This first conference was generously sponsored by the Newport County Chamber of Commerce, the Consulate General of Israel to New England, and Hinckley Allen.

For more information about the Rhode Island Israel Collaborative and future events, visit the RIIC webpage or contact the RIIC at [email protected].