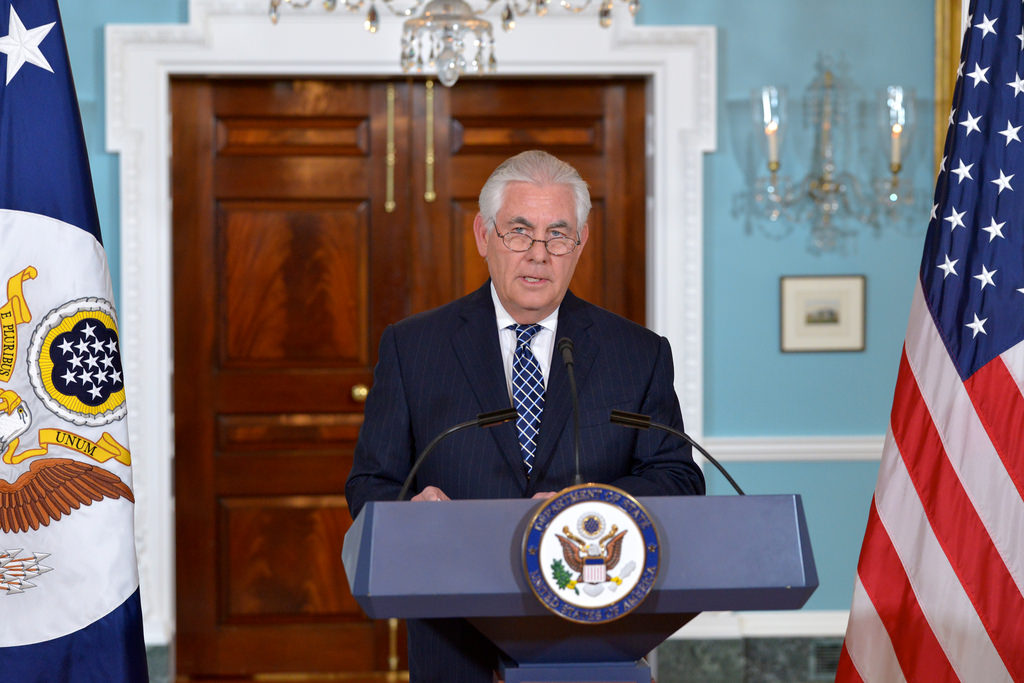 “Tillerson Visits Brussels Amid Doubts About his Future, and His Boss” | Politico Europe

“The Worst Secretary of State in Living Memory” | The Atlantic

When Rex Tillerson was chosen as Secretary of State, there was some hope that he might prove to be a decent—if not exceptional—defender of U.S. interests and values around the world. After all, leading American businessmen have occasionally proved to be almost equally shrewd statesmen—George Schultz and Robert Mcnamara come to mind—and Tillerson came highly recommended by luminaries of the Republican national security establishment, such as Robert Gates and Condoleeza Rice. His opening remarks to State Department employees gathered in the Dean Acheson auditorium seemed to hit all the right notes, and presented a welcome degree of normalcy shortly after the Neronian spectacle of Donald Trump’s unhinged address at the CIA.

Rapidly, however, it has become evident that Rex Tillerson is an abject failure. In fact, as Eliot Cohen notes in a scathing essay for The Atlantic, it would appear that the former CEO of Exxon Mobil is “the worst Secretary of State in living memory.” Cohen provides the reasoning behind this assessment in an elegantly crafted but devastating paragraph:

Tillerson was, as is now recognized even by those who put him there, a disaster. As with most spectacular Washington flame-outs, his failures stem not from stupidity or general incompetence, but from a specific set of disabilities: an introverted and cocooned style of management that gave power to a few hated but overwhelmed and incompetent gatekeepers; insufficient skill at buttering up his volatile boss who, in an unguarded moment, the secretary seems to have characterized as a “moron”; morbid suspicion and sequestration of the State Department press, alienating a collection of hopeless foreign-policy wonks who normally fall in love with the secretary and sing his or her praises accordingly; management-jargon-laden reforms heavy on business-speak and low on familiarity with the work of diplomacy that demoralized the foreign service; and incapacity at finding and pushing through appointees who might do the work of diplomacy. He was a debacle, pure and simple, the worst secretary of state in living memory (and there has been serious competition) not because of ineptitude, but because of the semi-intentional demolition job he was doing on his own department even as he fell out of presidential favor.

The problem, however, is that the slippery, pusillanimous folks at the White House have not mustered the courage to formally push him out. Rather, through a drip drip strategy of leaks akin to ancient Chinese water torture, they are hoping to make his life so miserable that he will leave of his own accord. For close American allies, this is an uncomfortable position to be in. They know that Tillerson has lost the ear of the President, that a “Rexit” is in the offing, and that he has become a lame duck in Washington. And yet, as Europeans displayed this week during his visit, they must still go along with the motions and pretend that what he says matters and reflects the thinking of the President.

Behind the scenes—and the forced smiles, and awkward handshakes of this elaborate diplomatic masquerade—many European leaders and diplomats are quietly simmering with rage over the Trump Administration’s chronic disregard for their nations’ interests and views. As Robin Emmott at Reuters notes, European concerns about President Donald Trump’s foreign policy “have created a rift on a host of issues.”

European allies are troubled by Trump’s “America first” rhetoric, his decision not to certify Iran’s compliance with a nuclear deal, his withdrawal from the Paris climate accord and now plans to move the U.S. embassy in Israel to Jerusalem.

Although Tillerson tried to strike a reassuring tone—by affirming the United States’ “ironclad” commitment to NATO’s Article V, EU governments recognize that his views are not necessarily reflective of those of the White House. The tension was particularly visible during his meeting with Federica Mogherini, the European Union foreign policy chief, in Brussels on Tuesday. As the New York Times’s Gardiner Harris notes,

Mr. Trump’s nationalistic rhetoric and frequent complaints about what he sees as European freeloading on American military spending has long grated on European leaders, but in recent weeks their annoyance has turned to anger. When Mr. Tillerson and Ms. Mogherini gave public statements, Ms. Mogherini never smiled and she refused to answer questions.

David M. Herzenhorn at Politico made the caustic observation that Federica Mogherini “looked like she would be happier in a dentist’s chair,” and that she “welcomed U.S. Secretary of State Rex Tillerson on Tuesday with all the warmth of a December day in Helsinki.”

Despite these tensions and growing misgivings—particularly in countries such as Germany—Europe’s national security communities realize that the United States remains an indispensable partner, and a valued ally. Transatlantic ties may be under severe strain, but their sinews are strengthened by decades of friendship and cooperation, and most observers believe that they will survive the storm of the Trump presidency. Which is why European allies are paying such close attention to the rumors surrounding Tillerson’s most likely replacement at the head of the State Department.  For months now, various sources have strongly suggested that this might be Mike Pompeo, the canny Kansan currently leading the CIA.  Pompeo is widely recognized as a brilliant, albeit hard-charging political operative. European allies are reassured, to a certain extent, by the fact that he has succeeded where Tillerson failed, by simultaneously cultivating close relationships with his mercurial commander-in-chief, as well as with his more seasoned subordinates in the intelligence community. According to Mark Lander in the New York Times, Mr. Trump..

…has come to value Mr. Pompeo’s pungent opinions and hard-charging style during his presidential briefings.  (…) Mr. Pompeo, analysts said, would bring other qualities to the State Department that could make him more effective than Mr. Tillerson, not least his healthy relationship with the president. Mor. Pompeo has won credit at the CIA for consulting the agency’s professional staff, something that Mr. Tillerson has conspicuously chosen not to do.

Concerns remain, however, over his deeply ideological nature, and the seemingly knee-jerk quality of his hawkism toward complex international issues that directly impinge on European security, such as Iran. All in all, however, there is little doubt in European capitals that he would prove a better chief diplomat than the strangely aloof figure of Rex Tillerson.