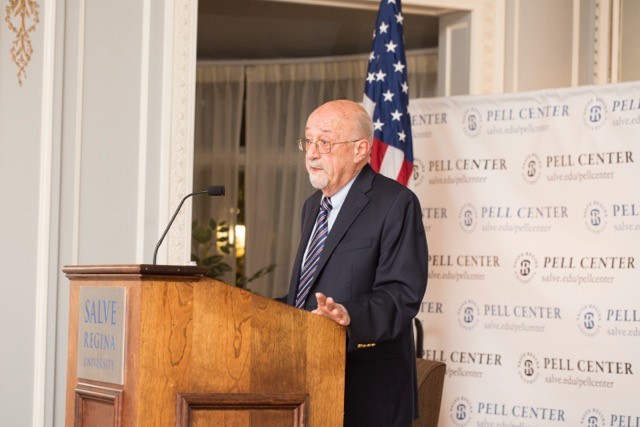 The American political system has always cycled through periods of progress and conservatism. As voters grapple with just which course they favor in 2016, Mario DiNunzio, professor emeritus of history at Providence College, kicked off the Pell Center’s 2016-2017 lecture series with a discussion of his new book, Who Stole Conservatism?

DiNunzio outlined a history of conservatism from the 18th century to today, crediting the structure of classic conservatism to political theorist Edmund Burke’s Reflections on the Revolution in France. Characteristics of this conservatism included concern for order, respect for institutions, regard for tradition, reverence of religion, and attention to practical reform. DiNunzio traced the evolution of American conservative political thinking from the revolution to today. In his remarks and in his book, he drew special attention to the Gilded Age–the period at the end of the 19th century when American capitalism produced vast fortunes that dwarfed even the budget of the United States. Big business, in that era, began to take precedence over government and conservative politics began to adopt a more materialistic concern.  Conservative politics increasingly became synonymous with being “business-friendly.”

“Mario DiNunzio was my undergraduate advisor when I was a student at Providence College,” said Pell Center Executive Director Jim Ludes.  “When I first entered the classroom as a professor, I did my best impersonation of him,” Ludes continued.  “But the truth is, there is only one Mario DiNunzio and we were fortunate to kick-off the start of the Pell Center’s 2016-2017 programming with him.”