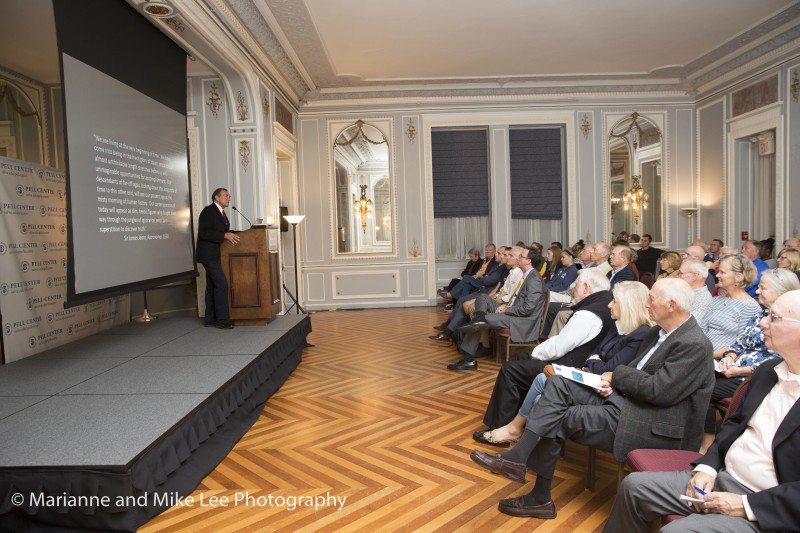 On October 5, 2016 the Pell Center hosted an audience full of eager students and community members in the beautiful ballroom of the Young Building for a thought-provoking lecture on the complex ethical future of the world as emerging technologies continue to yield unexpected consequences. The talk featured Naval War College Provost Lewis M. Duncan. As a member of the Board of Directors for the Advancement of Science in Space, Duncan is well-versed on the impact of the hard sciences on human reality. His career as a professional in the research of of technology within the last 40 years. As a self-proclaimed “pathological optimist,” Duncan’s lecture presented the technological future of the world with hope and excitement while simultaneously hinting at the consequences of some unforeseen problems that are inevitable within the next 50-100 years. Through an overview of six developing technological categories, Duncan encouraged the audience to look ahead and to consider a world of endless possibilities.

To top off the talk, Duncan began with a brief history of human-kind, discussing our development as a species within the last 13,000 years. He demonstrated through an analogy how patterns in human development and innovation have always been exponential. Duncan describes technological development like the common brain-teaser which asks participants to determine when a fish bowl that fills with marbles by powers of two becomes half-full. Duncan describes the technological development process from far away, showing how the bowl fills seemingly all at once as it is at one moment half-full and then, as the marbles double upon themselves, completely full in the following moment. In this way, he explains that it is a mistake to view technology along straight lines. Duncan asserts that, “technology is catalytic…it builds on itself” and that necessity may not be the mother of invention any longer. Today’s technology is more decisive and divisive because scientific capability and competition encourages change instead of necessity. According to Duncan, this is the case with the technology of the future. The beginnings of a technological revolution are already visible in six developmental categories: materials, nanotechnology, biotechnology, information technology, Neuroscience, robotics and artificial intelligence. Duncan says, “The world is changing faster than we are prepared for.”

Duncan predicts that in the not-so-distant future, we will have the ability to stop cellular aging and death. Technological innovations will be giving human beings a run for their money. He says that sometime in the next 10-15 years, computers will be able to pass the Turing test. Meaning that, computers will be indistinguishable from human beings based on a process developed by scientist, Alan Turing, which measures intelligent behavior in computing machines. By the year 2040, computers will no longer need to be handheld. They will be so essential to the function of society that they will become embedded in our environment with the human brain functioning as more of a “peripheral device.” Finally, in 2050, Duncan predicts that machines will reach a state of singularity, “they will no longer need us and will race past us in human intelligence.” Duncan describes this point in human history as being similarly important to the moment when biological life first appeared on Earth. This level of innovation seems amazing because it is likely that these machines will eliminate or reverse many of the world’s trickiest human problems like death, starvation and climate change. However, in the process, it will create a number of complex ethical questions. If we are all able to live forever, how will the world’s resources sustain us all? Will we be allowed to have children? If intelligent machines are able to replace every human job, how will we spend our time? Will there be a war in which the machines we created wipe out the human population? Will computers have culture?

Duncan leaves these questions with the audience, forcing us all to see beyond our myopia. The future is coming and it is coming quickly, we will need to reinvent ourselves in order to keep up.