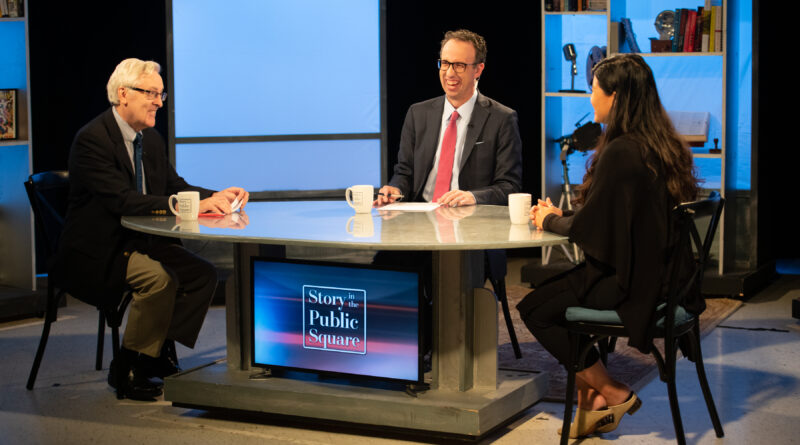 NEWPORT, RI – “Story in the Public Square,’ the six-time Telly Award-winning series from the Pell Center at Salve Regina University, is set to premiere its tenth national season on public television beginning the week of Monday, January 2, 2023 via NETA.  The new season will feature 24 new episodes with guests who either study or tell stories that shape public understanding of politics, culture, sports, technology, healthcare, and more.

Each weekly, 30-minute episode of “Story in the Public Square” offers a chance for audiences to connect with a story, dive deep into its intricacies, and—through the hosts—explore and learn. The show is the fruit of a long-standing creative collaboration between Jim Ludes (Vice President, Salve Regina University) and G. Wayne Miller (Director of the Pell Center’s Ocean State Stories initiative, Salve Regina University.)  It has been in production at Rhode Island PBS since January 2017.

In its tenth national season, hosts Ludes and Miller will welcome guests from around the world, both virtually and in-studio at Rhode Island PBS.

“I still like to remind people that the show began as an effort to highlight the narratives we, as citizens, are bombarded with on a daily basis,” said Ludes who studies the history of disinformation.  “And each week, we’re still talking to storytellers who are either creating worlds with words or using words to understand and often change the world around us.  It is incredibly exciting to continue this work.”

“Looking forward to our tenth national season, I find myself reflecting on the incredible guests and team that has given this show its spark from the beginning,” said Miller.  He added, “ten seasons on national public television is truly an accomplishment and it wouldn’t be possible without all they bring to our set.”

Story in the Public Square is currently seen in more than 85 percent of the nation’s television markets with nearly 500 weekly broadcasts nationally.  It has won Telly Awards for excellence in politics and commentary as well as social impact in 2022, 2021, 2020 (twice); 2019, and 2018.  The show is produced by the Pell Center at Salve Regina University and presented by Rhode Island PBS via NETA, the National Educational Telecommunications Association.