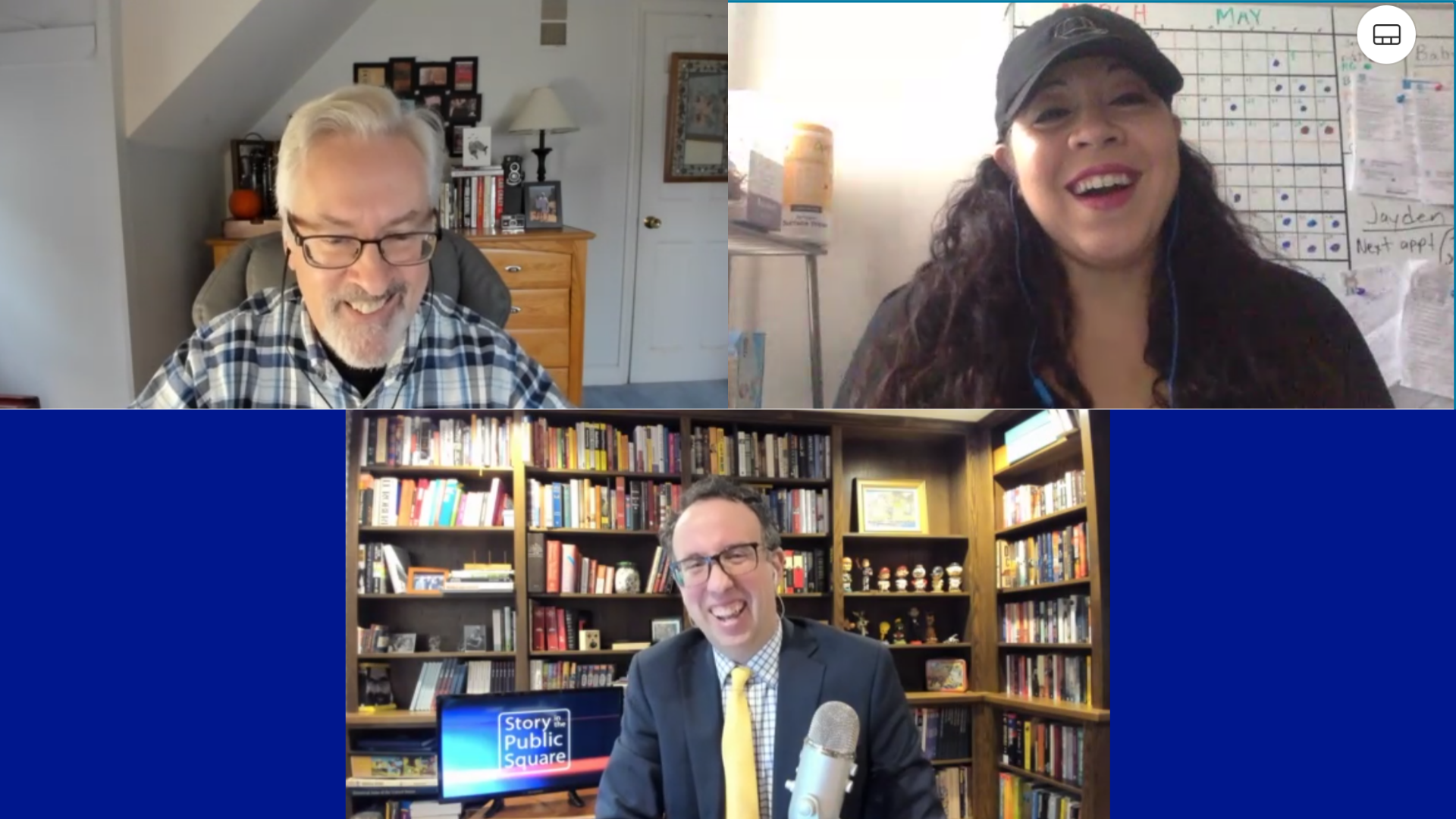 Above: Author and comedian Gina Brillon prepares to tape an episode of “Story in the Public Square” virtually with hosts Jim Ludes and G. Wayne Miller in November 2020.  Below: Jim Ludes’ home studio.

In early 2020, news of the coronavirus’ spread across the globe made headlines.  As the first cases emerged in Rhode Island, schools and offices closed; it became clear production of “Story in the Public Square” was no longer possible in the studio.  Determined to adapt, the production crew sprang into action and prepared to produce the show virtually.  Co-hosts Jim Ludes and G. Wayne Miller put together their at-home studios and prepared to bring distinguished guests to cloistered audiences tuning in to public television stations across the country.

Prior to guests arriving on screen, fine-tuning and adapting the available technology proved to be a challenge in the weeks leading up to the first remote episode taping.  Miller reflected on the initial weeks he spent at his home studio in Rhode Island.  He said the pandemic was both a blessing and a curse when producing the show—the curse pertaining to the inevitable technical challenges the crew faced along the way.  He noted the loss of camaraderie that came with “not seeing our crew and having guests in-person at the studio” was an added setback.

The blessing of being remote, Miller continued, has been hosting guests from all over North America who would not have otherwise had time to make the trip to the Rhode Island PBS Studio.  “I am thinking especially of guests from California, Colorado and Oregon, and even British Columbia, including some in the film and televisions industries, who have graced our show during the pandemic,” he said.

Guests like Mo Rocca, Tricia Rose, Robert Dallek, Josh Gad, Ida Darvish, and Dr. Megan Ranney have shed light on the latest information surrounding the pandemic and provided context for the wide range of issues facing Americans over the last year.  As “Story in the Public Square” begins broadcasting its seventh national season this month, the incredible guests who share their diverse perspectives and stories continue to drive its success.

“After every episode, Jim and I talk about how lucky we are to be able to bring these guests to our audience.  We’re grateful to every single one of them,” added Miller. 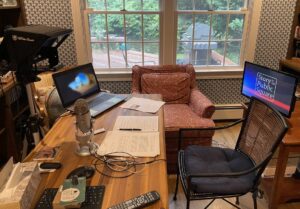 Seasoned television producer Carolyn Deady joined the “Story in the Public Square” production team in October 2020, bringing a wealth of industry knowledge to the program.  A former international producer at CSPAN in Washington, D.C., Deady was the liaison with world legislatures, obtaining coverage of parliamentary proceedings for broadcast to offer the CSPAN audience an international perspective on events affecting the United States.

Deady said, “I was, and remain, so impressed that Jim, Wayne and the whole crew had continued to produce the show, week after week, with all of the challenges that come with that prospect, especially of the technical sort.  The whole crew at Rhode Island PBS are a joy to work with, maintaining their enthusiasm and dedication throughout this difficult time, and the guests have been amazing!”

“Story in the Public Square” was also honored with its fifth Telly Award in 2021, winning bronze for its 2020 episode featuring Elizabeth Rush, author of “Rising: Dispatches from the New American Shore.”  Rush’s book was a finalist for the Pulitzer Prize in General Nonfiction and the 2020 Reading Across Rhode Island selectee from the Rhode Island Center for the Book.

The series continues to broadcast each week on public television stations across the United States.  In Rhode Island and southeastern New England, the show is broadcast on Rhode Island PBS on Sundays at 11 a.m. and is rebroadcast Thursdays at 7:30 p.m. An audio version of the program airs 8:30 a.m., 4:30 p.m. and 10:30 p.m. ET, on SiriusXM’s popular P.O.T.U.S. (Politics of the United States), channel 124.  “Story in the Public Square” is produced by the Pell Center at Salve Regina University and presented by Rhode Island PBS via NETA, the National Educational Telecommunications Association.