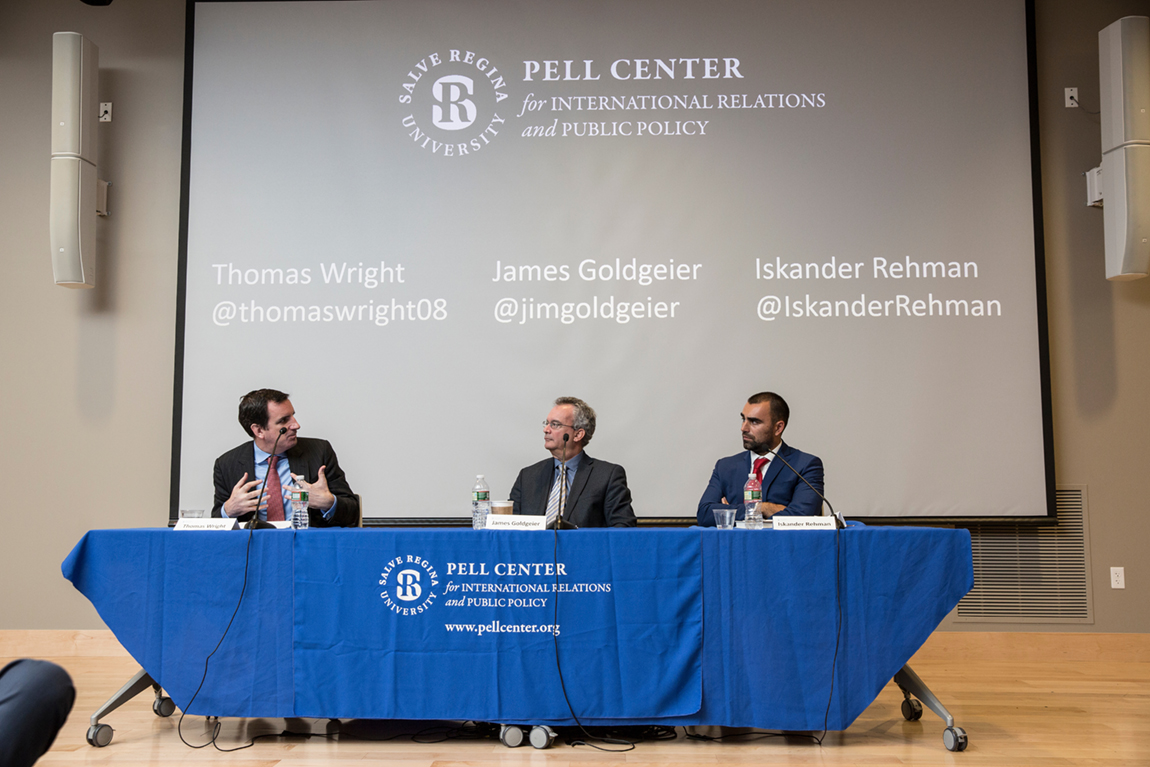 With the spring semester in full swing we are excited to announce our Spring 2018 Event Series! The events feature a range of topics including Trump’s U.S. foreign policy, exploring new technologies emerging in electronic warfare, and gender issues in today’s U.S. military. Tickets to Pell Center events are free and open to the public. Please RSVP in advance for each event on the Pell Center’s Eventbrite page, and call 401-341-2927 or email [email protected] with any questions or concerns.

Please note, most events this spring will take place at the Bazarsky Lecture Hall in the O’Hare Academic Center. The exception is our “Pell Center Prize for Story in the Public Square” on April 23, 2018, which will be held at 7:00 p.m. in the Young Building.

How might emerging and evolving technologies—whether in the field of electronic warfare, unmanned systems, or in space—transform tomorrow’s battlefields? How should the U.S. and its allies adapt their force structures and operational constructs in order to both deter and prevail within such a rapidly shifting combat environment?

The Pell Center will convene a panel of defense experts to discuss these important issues. The event will be chaired by Dr. Iskander Rehman, Senior Fellow for International Relations at the Pell Center.

Is There a Trump Doctrine in U.S. Foreign Policy?

One year into the Trump administration, can one detect a clear Trump Doctrine guiding U.S. foreign policy? If not, why not? And if so, what are its guiding principles and overarching goals? How might it differ from–or resemble– other U.S. presidential administrations throughout history? On March 07th, the Pell Center will convene a panel of close observers of Trump’s foreign policy to debate this issue. The event will be chaired by Dr. Jim Ludes, Executive Director of the Pell Center.

American democracy—and western liberal democracies more broadly—are under attack. Our elections, our public debates, and our social fabric are under sustained attack from a Russian government determined to rekindle a new Cold War. In this talk, Dr. Jim Ludes blends history and contemporary events for an understanding of the nature of the threat and the steps every citizen can take to contribute to the republic’s defense.

In collaboration with the Department of Administration of Justice

In January 2016, former Secretary of Defense, Ash Carter opened all military positions to women. Since that moment, more than 640 women in the Army and 180 women in the Marines have entered previously closed artillery and combat engineer jobs. This panel discussion will shed light on the status of gender integration in the military. Building on former “Warrior Women” panel discussions, this discussion also seeks to empower young people—particularly women—to pursue careers in national security, by shedding light on opportunities available in the armed forces, as civilians and warfighters. Two panelists, with current and former careers in the military, will provide insight on their career paths, hurdles women experience in the field, and strategies for career success.

2018 Pell Center Prize for Story in the Public Square

Dan Barry, a New York Times senior writer and the author of four books, has been named the 2018 recipient of the Pell Center Prize for Story in the Public Square. The prize, awarded annually since 2013, honors a storyteller whose work has significantly influenced the public dialogue.

John E. McGinty Lecture in History – The Attica Prison Uprising of 1971 and Why It Matters Today

In 1971 nearly 1300 men took over one of the nation’s most infamous prisons, the Attica Correctional Facility in upstate New York. That historic uprising for to secure basic human rights was met with deadly force and for the next 45 years the story of how such trauma could have taken place was hidden from the public. Heather Ann Thompson shares the story of this dramatic rebellion, its tragic end, and the depth of the coverup that followed it. Knowing this history, she suggests, shines needed new light on why we have more people locked up in the United States today than any other country on the globe.