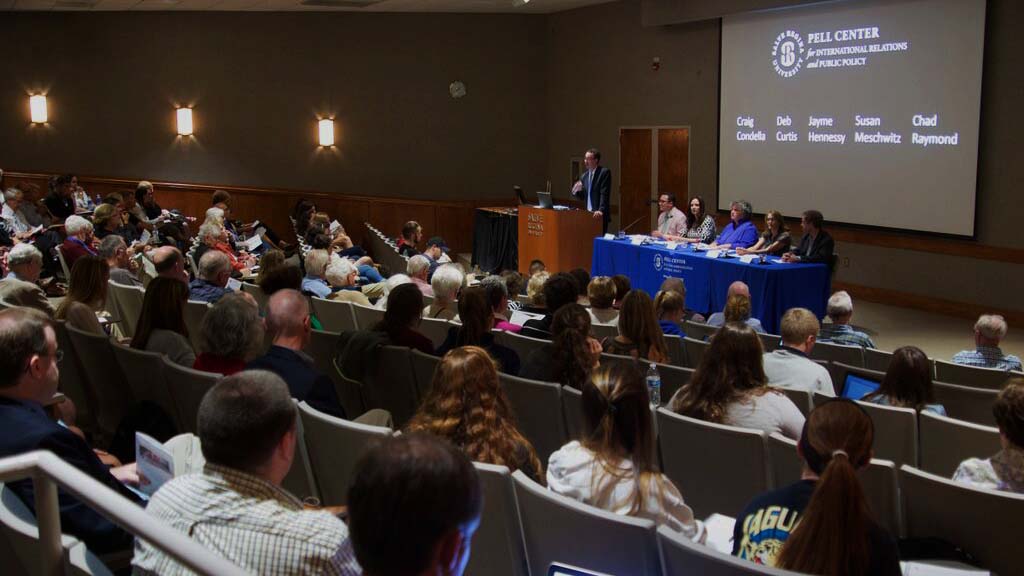 Today the Pell Center announced our Spring 2017 event series. Tickets to Pell Center events are free. Please RSVP in advance for each event on the Pell Center’s Eventbrite page, and call 401-341-2927 or email [email protected] with any questions or concerns.

The 1916 Easter Rising and the Origins of Modern Irregular Warfare

On April 24, 1916 (Easter Monday), Irish rebels seized key locations in downtown Dublin and declared an independent Irish Republic.  The “Easter Rising” ended in ignominious defeat, but also marked a new stage in Ireland’s struggle for national independence.  Lessons learned from the Rising contributed directly to the success of Irish rebels in the Anglo-Irish War of 1919-1921.  They also served as a model for future anti-colonial and independence struggles around the globe later in the 20th century.

Racial Equity: What is the Call to Action for Higher Education?

Bethany Johnson-Javois, Former Ferguson Commission Managing Director and CEO of the St. Louis Integrated Health Network will engage with attendees to re-connect with their leadership purpose and reflect on lessons learned from her work to address community-level trauma and toxic stress spurred by the events in Ferguson, MO on August 9, 2014. Ms. Johnson-Javois will outline a series of calls to action for higher education that offer a path to what generational change will require, using the lens of racial equity.

This event is in partnership with Salve Regina University’s Office of Multicultural Programs and Retention. Bethany Johnson-Javois’ visit is supported by a grant from the Davis Educational Foundation, established by Stanton and Elizabeth Davis after Mr. Davis’s retirement as chairman of Shaw’s Supermarkets, Inc.

The Future of U.S. Asia Policy Under a Trump Administration

A panel of distinguished experts will discuss the future of the U.S. Asia Policy under a Trump Administration. In the course of the moderated discussion, the panelists will discuss issues such as the threats posed to freedom of navigation in the Asian maritime commons, the future of the US-India relationship, and perceptions of the new U.S. administration and of its Asia policy from different Asian capitals, including Beijing. The presentations will be followed by a short Q and A with the audience.

Dr. Sean Kay, Professor in the Department of Politics and Government, Ohio Wesleyan

In Rockin’ the Free World, international relations expert Sean Kay takes readers inside “Bob Dylan’s America” and shows how this vision linked the rock and roll revolution to American values of freedom, equality, human rights, and peace while tracing how those values have spread globally. Rockin’ the Free World then shows how artists have engaged in advancing change via opportunity and education; domestic and international issue advocacy; and within the recording and broader communications industry. The book is built around primary interviews with prominent American and international performing artists ranging from Rock and Roll Hall of Fame inductees and Grammy winners to regional and local musicians. The interviews include leading industry people, management, journalists, heads of non-profits, and activists. The book concludes with a look at how musical artists have defined the American experience and what that has meant for the world.

Unconditional Surrender: The Failure of Peace Negotiations in the American Civil War

Most wars in American history have been ended by peace negotiations that led to a treaty between the contending parties: the Revolutionary War, the War of 1812, the Mexican War, the Spanish-American War, World War I, even in some respects the Vietnam War.  The two major exceptions are the Civil War and World War II, which ended in unconditional surrender and the utter destruction of the losing side’s government and political structure.  The lecture will discuss the various efforts for a negotiated peace during the Civil War and will analyze why they failed–indeed, why they really had no chance to succeed.

“Defying the Nazis: The Sharps’ War,” a film directed by Ken Burns and Artemis Joukowsky, tells the story of Waitstill and Martha Sharp, a Unitarian Minister and his wife from Wellesley, Massachusetts who spent nearly two years on life-threatening missions in Europe. The couple left their children behind in the care of their parish to help save political dissidents and Jewish refugees fleeing the Nazi occupation across Europe.

This lecture is in partnership with Touro Synagogue.