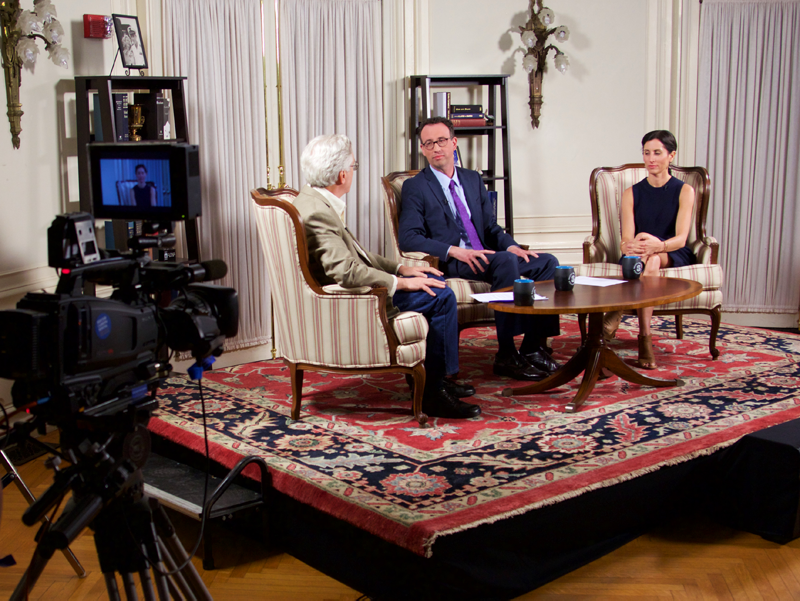 NEWPORT, R.I.—The Pell Center at Salve Regina University will partner with “White House Chronicle,” a national PBS show with global reach, to produce episodes of “Story in the Public Square.”

Hosted by Pell Center Executive Director Jim Ludes and G. Wayne Miller, visiting fellow and director of the Story in the Public Square initiative, the new episodes will feature interviews with today’s best print, screen, music and other storytellers about their creative process and how their stories impact public understanding and policy.

“Last year, after shooting two pilots of a stand-alone series with best-selling author Lisa Genova and Pulitzer Prize-winning New York Times writer Dan Barry, we decided a partnership with a high-profile existing show would be the best road to travel,” said  Miller, a staff writer at The Providence Journal. “Subsequent conversations with Llewellyn King and Linda Gasparello, co-hosts of ‘White House Chronicle,’ led to this great opportunity.”

“White House Chronicle” will present a special-edition episode each month featuring Story in the Public Square.

“We created Story in the Public Square four years ago to study, celebrate and tell stories that matter,” said Ludes. “We are thrilled to be working with Llewellyn and Linda, two tremendous storytellers in their own right, to reach a national – and international – audience.”

“Through our partnership with Jim Ludes of The Pell Center and G. Wayne Miller, a distinguished author, filmmaker and journalist, we open the door to two exciting minds. Embedding Story in the Public Square into ‘White House Chronicle’ will add a new dimension to the program, which Linda and I have been producing and presenting for 20 years,” said Llewellyn King, who is also the creator and executive producer of the program.

“Episodes of Story in the Public Square on the program will show how ‘stories’ can shape our history, mold our culture, shine a light into dark corners, and provide comfort and healing. Telling stories is the very stuff of civilization,” King added.

The first episode of “Story in the Public Square,” featuring guest August Cole, will air on Sunday, March 6, 2016 at 11:30 a.m. on PBS (WSBE) in Rhode Island. Cole is the co-author of Ghost Fleet: A Novel of the Next World War, and a nonresident Senior Fellow at the Atlantic Council where he directs the Art of Future War project, mining narrative fiction and visual media for insight into the future of conflict.

Story in the Public Square is a partnership of the Pell Center and The Providence Journal. More at pellcenter.org/story-in-the-public-square.