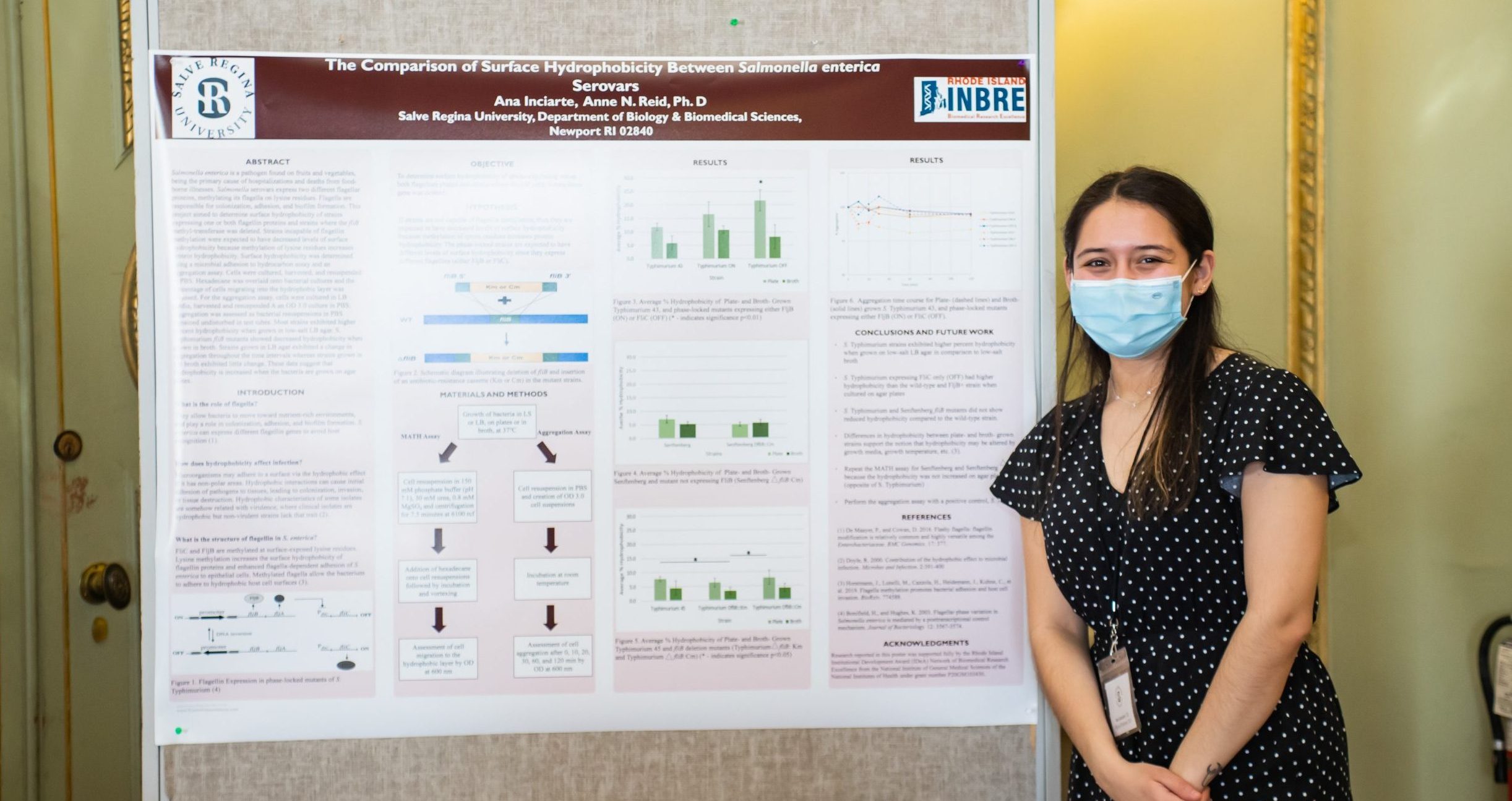 NEWPORT RI—Salve Regina University undergraduate students presented their academic and extracurricular research and involvements to an audience of their peers, faculty, staff and community members as a part of the 12th-annual SRyou Student Exposition on Wednesday, March 24.  Among them were the 2020-2021 Nuala Pell Leadership Fellows who presented their research on a wide range of public issues from the racial gap in healthcare access, to the responsibility public leaders have to mitigate stigma around disease outbreaks. 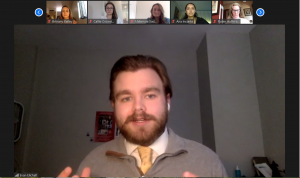 This year, some student presentations were held on campus, while other sessions, including this session featuring the Nuala Pell Leadership Fellows, were held virtually.  Evan Elichalt, a senior history and economics dual major and philosophy minor, began the session with a discussion on universal basic income, weighing the economic and political risks and benefits its implementation would have on the U.S. economy in his presentation, “Universal Basic Income: A Utopian Idea, or a Necessary Policy?”  He is pictured on the right, presenting during the virtual session on Wednesday.

Ana Inciarte, a junior biology major with a concentration in microbiology, discussed racial inequity in today’s healthcare system and the implicit biases and history that have contributed to the issue.  She noted several historical instances of medical experiments performed on black men and women, including the infamous Tuskegee syphilis study, that dehumanized their subjects.  Particularly poignant during the coronavirus pandemic, Inciarte contrasted this tragic history with the Center for Disease Control’s recent effort to distribute the vaccines to community health centers, which serve predominantly low-income and minority populations.  She said the priority vaccine-distribution group at these centers is now comprised of “patients who are not proficient in the English language [and] people who are homeless or [live] in public housing.”  As an aspiring OB/GYN, Inciarte hopes to specialize in reproductive endocrinology and provide access to medical care for underserved populations.

Ryan Miech, a senior studio art major with a triple concentration in graphic design, illustration and interactive media art, presented “The Implications of Cutting Art from Public Education.”  Miech recommended communities struggling to fund school art programs take note of the creative ways inner-city schools leverage flexible solutions to make such programs possible, despite limited funding.  Makenzie Sadler, a junior secondary education and history dual major, presented “What Could Go Wrong?” Public Education in a Global Pandemic,” in which she discussed the challenges the coronavirus pandemic has posed to in-person education.  Her case study contrasted the Pawtucket and Providence Rhode Island public schools’ approaches to educational instruction during the pandemic and their plans for reopening. 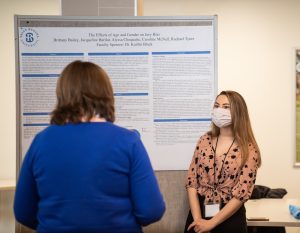 Brittany Bailey, a junior psychology and Administration of Justice dual major presented “Sex Trafficking of Minors in Rhode Island,” identifying the major contributors to the issue, affected populations, and current efforts to combat sex trafficking in Rhode Island.  Bailey conducted a policy analysis on the issue as part of her recent internship.  She is pictured on the left, presenting a group research project entitled, “Observing Jury Bias Between Gender and Age” during an in-person presentation session on Wednesday.  Senior psychology major Callie Crowston-Hickey presented “The Stigma and Perception Regarding Disease in the Time of COVID-19.”  Her research examined the stigmatization of individuals affected by diseases like the coronavirus, and emphasized public leaders’ responsibility to discourage stigmatizing behaviors and disseminate accurate information when addressing disease outbreaks.

Senior Kyra Dezjot closed the session with her presentation, “How Violent Rhetoric Incites Violent Action: The Rise in Anti-Semitism During the Trump Administration,” in which she examined President Donald Trump’s contribution to the rise of antisemitic attacks during his presidency.  A history and secondary education dual major, Dezjot emphasized her commitment to addressing harmful misconceptions in her classroom.  She said, “[a]s a future leader in the public sector, more specifically, [as] a teacher, I will strive to address hate in my classroom every day.  My classroom [is] now and will be a place of inclusion and where hateful language will not be tolerated.”  As a student teacher, she frequently discusses the historical oppression of minority groups and its impact on current events with her students.

Nuala Pell Leadership Program Director Dr. Martha McCann Rose was among the students, faculty and staff in attendance at the virtual presentation session.  She remarked, “each student did a masterful job of researching a public issue and reflecting on it through the lens of leadership.”

Named in honor of the late Nuala Pell, wife of Sen. Claiborne Pell and an avid supporter of public service, the Nuala Pell Leadership Program provides opportunities to a select number of diverse, high-achieving student fellows at Salve Regina University, exposing them to both the theory and practice of leadership with an emphasis on public service.