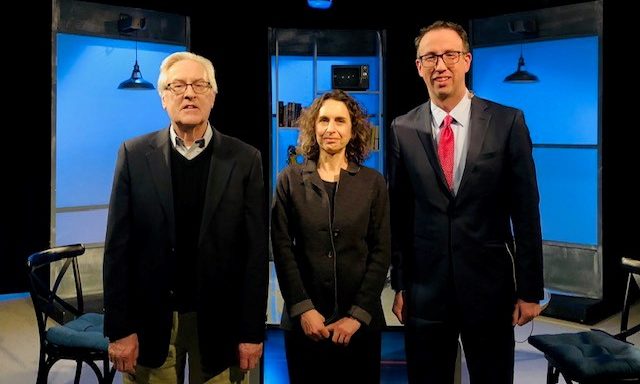 The fossil record of planet earth tells us that there have been five mass extinctions—the most famous being the fifth that destroyed the dinosaurs. Elizabeth Kolbert warns that we’re in the midst, now, of the sixth extinction and its cause is human activity.

Kolbert’s Pulitzer Prize-winning book, The Sixth Extinction, documents the risk to species across the planet. The threat is human activity.  The fabric of life has been altered largely in part by poaching, over-fishing, and deforestation—among other human activities. The resulting loss in biodiversity is reshaping life on Earth.

Kolbert was the recipient of the 2019 Pell Center Prize for Story in the Public Square, presented at a ceremony on the Salve Regina University campus earlier this spring.

Story in the Public Square” broadcasts each week on public television stations across the United States. A full listing of the national television distribution is available at this link. In Rhode Island and southeastern New England, the show is broadcast on Rhode Island PBS on Sundays at 11 a.m. and is rebroadcast Thursdays at 7:30 p.m. An audio version of the program airs 8:30 a.m. & 6:30 p.m. ET, Sundays at 4:30 a.m. & 11:30 p.m. ET on SiriusXM’s popular P.O.T.U.S. (Politics of the United States), channel 124. “Story in the Public Square” is a partnership between the Pell Center and The Providence Journal. The initiative aims to study, celebrate and tell stories that matter.