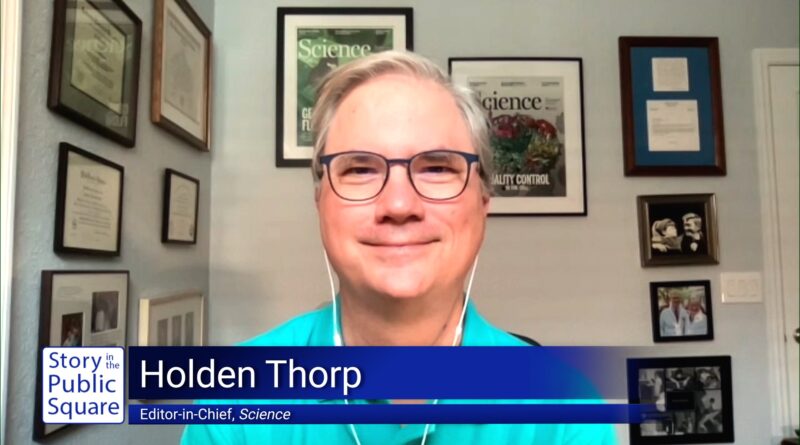 Science is under assault—on social media, on our airwaves, and sometimes even around our dinner tables.  Holden Thorp discusses the role science can and should play in an era of profound challenges, like climate change, pandemic disease, and profound changes in technology’s relationship with humanity.

Holden Thorp has been the Editor-in-Chief of the “Science” family of journals in 2019. He came to “Science” from Washington University, where he served as provost and continues to serve as the Rita Levi-Montalcini Distinguished University Professor, holding appointments in both chemistry and medicine.  A North Carolina native, Thorp earned a Bachelor of Science degree in chemistry at the University of North Carolina Chapel Hill in 1986 and a doctorate in chemistry in 1989 at the California Institute of Technology, working with Harry B. Gray on inorganic photochemistry.  He completed postdoctoral work at Yale University with Gary W. Brudvig, working on model compounds and reactions for the manganese cluster in the photosynthetic reaction center.   In his research career, Thorp studied electron-transfer reactions of nucleic acids, developed technology for electronic DNA chips, and cofounded Viamet Pharmaceuticals, which developed VIVJOA (oteseconazole), now approved by the FDA and marketed by Mycovia Pharmaceuticals. Thorp is the coauthor, with Buck Goldstein, of two books on higher education: “Engines of Innovation: The Entrepreneurial University in the Twenty-First Century” and “Our Higher Calling: Rebuilding the Partnership Between America and its Colleges and Universities.”

On this episode of “Story in the Public Square,” Thorp discusses the mission of the “Science” family of journals.  He says, while some people read new scientific research in science journals, most get their information from news stories about those studies.  He says its biggest impacts are made when other media outlets cover research published in “Science” or the American Association for the Advancement of Science and they “work very hard to make sure it’s done accurately.”