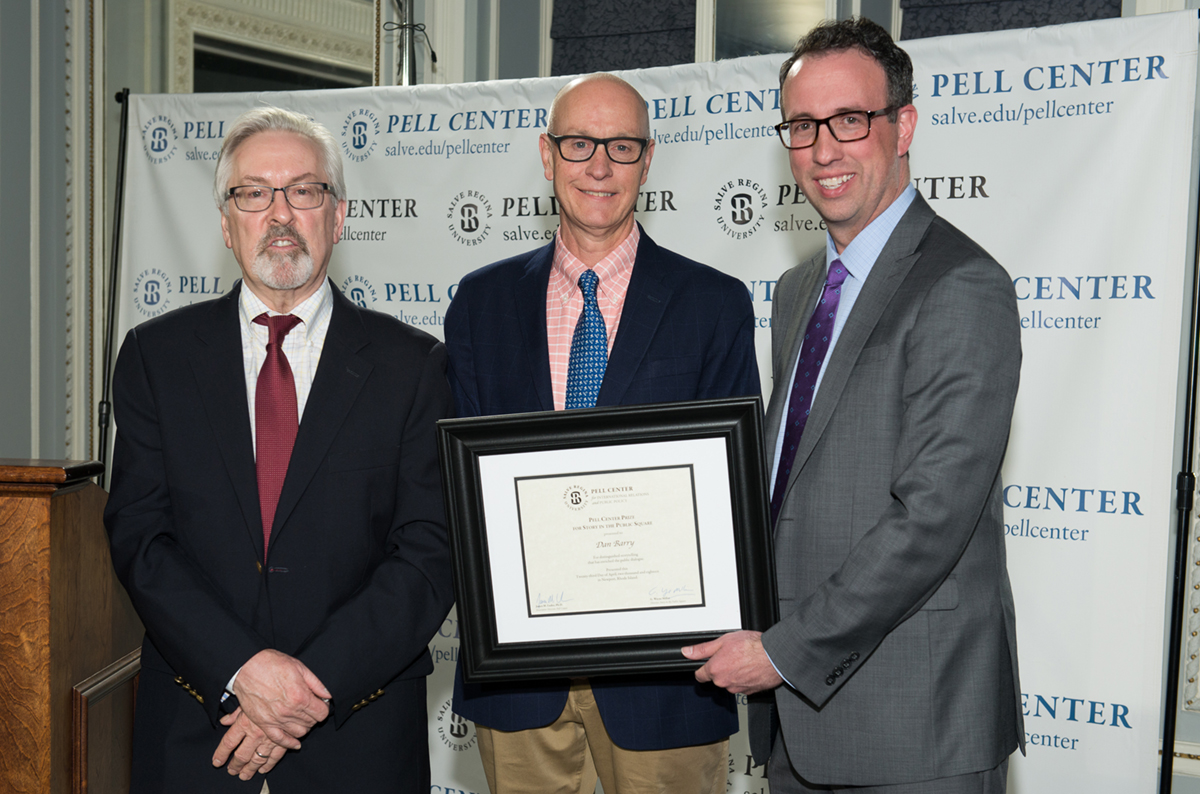 Just know that it is now officially too late for you and the Pell Center to change your mind. Mary, start the car.

What an honor it is to be receiving this award. It means so much because The Pell Center Prize for Story in the

Public Square is not about investigative reporting, or deadline reporting,

or opinion writing. It centers on something less celebrated — but more elemental. Something that binds all nonfiction at its best.

That, of course, is the telling of the story:

The pursuit of enticing the audience to step out of their own lives and into the lives of others — all through the alchemy of facts, and words, and images, carefully arranged.

I just turned 60 years old, and for most of my life, if someone bothered to ask what I did for a living, I would proudly say:

I’m a newspaper reporter. A scribe. A hack. An ink-stained wretch.

Or, if I wanted to impress the ladies: I’m a journalist.

But a few years ago, I was speeding in a rental car through a place called Washington, Kansas.

You know where that is, right?

Between Marysville and Scandia?

Anyway, I was speeding down Highway 36, singing along with the radio to “Nights in White Satin” by the Moody Blues:

Nights in white satin, I don’t know the words

When a Kansas state trooper pulled me over.

Then the trooper said: Mind if I ask a question? What’s a fella from New Jersey, driving a car with Colorado plates, doing in northern Kansas.

What do you do?

Don’t read it, the trooper said. What’s your business here?

Well, officer, if you must know.

I was just in Junction City, Kansas, where I watched the inauguration of President Obama with some middle school students — the children of soldiers at Fort Riley preparing for another deployment. They have a lot at stake in the new president, and I wanted to be there.

Uh huh. And where are you headed?

Carleton, Nebraska. It’s a town of about 140 people, and a few days ago a masked man robbed the bank, about the only business left in town. Witnesses described him as having – quote — a LARGE NOSE AND FAT FINGERS.

You haven’t seen anyone fitting that description, have you, officer? Large nose? Fat fingers?

The trooper looked at me for an uncomfortable length of time. Finally, he said: Have a nice day –

That state trooper gave me more than a speeding ticket. He forced me to think about that eternal, self-involved question: Who am I What is it I do?

Well, like so many people gathered here tonight, I guess I’m a storyteller.

And, to my mind, there is no greater calling. To me, telling stories is like the childhood pursuit of catching fireflies in a glass jar. In the never-ending rush of time, you reach out to capture a glowing moment.

You hold it up to examination with a kind of informed innocence.

You meditate on its individual wonder.

You try to see its place in the larger context of the universe.

I’ve always been like this. I’ve always had a pen and pad with me – at considerable cost to many suit jackets and pairs of khaki pants. But I want to be always ready to capture another firefly of a moment.

Here, for example, is my life. More than 30 years ago, I was at a county fair in Connecticut, and there was an attraction for – a large pig. The recording of the carnival barker’s pitch was so beguiling to me that I listened to over and over, until I had written it down exactly:

Ladies and gentlemen, your attention please. If you have come to see the rare and unusual, come right in and see Big Alfie, the giant pig. Big Alfie is twice the size of the average pig. He is over 1,000 pounds. He is eight feet long and four feet tall. His jaws are so powerful that they could take a man’s leg off — in one bite. Come right in and see Big Alfie before you leave this arena. He’s one of a kind!

What’s crazy about this is: I still have that scrawled note. And while I have never written a story about Big Alfie, here’s the thing: I still think that, someday — maybe I will.

There are many reasons why I am this way.

For one thing, I had what others might call a dysfunctional childhood — but I prefer to think of it as merely insane. There was a lot of drinking, and fighting, and searching the skies for UFOs – as you do.

But at the center of it all was The Word.

My mother, an orphaned girl from County Galway, was a kind of suburban seanachie – spinning Homeric epics out of a simple run to the supermarket for a loaf of bread.

My father, a New Yorker hardened by the privations of the Great Depression, was forever delivering speeches in the kitchen – to a captive audience of eight, including three dogs — on how the powerful need to be held accountable.

And me? I got beat up a lot as a kid. My parochial school uniform included green pants, green tie, green and gold belt, and a gold shirt with the insignia of the Holy Spirit embroidered on the shirt pocket.

I looked like an usher at a St. Patrick’s Day party from hell.

It was catnip for bullies.

But you take these three gifts – the gift of language, the gift of skepticism, and the gift of the victim’s perspective – and my future was all but predestined.

Another reason why I am so drawn to the telling of stories is that I somehow wound up in Rhode Island, in the newsroom of the Providence Journal. At one point I was working on a project about the state’s infamous banking crisis. This project was chock-full of colorful characters, operatic moments, and larcenous behavior.

That’s right: I was writing about North Providence.

Anyway, I was pushing to get the story in the paper right away, because I had been conditioned to always be on deadline – always be in the paper. But my editor, Tom Heslin, who’s here this evening, sent me a three-word note through the newspaper’s messaging system.

The note said, simply: Slow it down.

I have thought about those three words more than Tom could have imagined. Beyond being good advice for how to live, “Slow It Down” has meant – in terms of storytelling – to savor that which is before you.

To recognize the epiphanies to be found in the throwaway moment; in the seemingly mundane details; in the lives of the voiceless, the vulnerable, the people who are just trying to get by.

Here’s how I slow it down.

I read a small article about a man who saved someone from drowning off the shores of Coney Island, and I think: I’ve never saved anyone from drowning. What does that feel like? Is it slippery? Is the victim buoyant in the water? It may not be news – but it is a story about the preciousness of life.

I go out on a torrential day in Manhattan, hear the song of rain-soaked men selling cheap umbrellas — “’Brella, ‘brella, ‘brella” – and wonder: Where do all these umbrellas come from? And there’s a story.

I spend a lot of time in Hampton Inns and Holiday Inn Expresses, and I think about the housecleaners — the maids, who spend their days cleaning the messes of others. They are invariably immigrants, and I ask: What must it be like to be an immigrant maid, working in a hotel – owned by Donald Trump.

And there is a story.

The mind trick, for me, is to try to put myself not only in the shoes of others – but in their skin as well. At the same time, stories told by others have informed my worldview. Others who are here this evening.

Kevin Cullen, the great Boston columnist and the Boswell to Whitey Bulger.

Kevin Sullivan and Mary Jordan of the Washington Post, who infuriate me because they never stop working. Kevin leaves tomorrow for Morocco. To out that in perspective, that’s even farther than Woonsocket.

Wayne Miller, who just recently helped the world understand the enigma that is Michael Flynn.

I am so grateful to have worked there, with you.

So thank you again for this humbling honor.

Storytelling sustains us. It helps us to navigate the shoals of life. To understand our everyday existence. To empathize with our brothers and sisters. To embrace the human condition in all its complicated wonder and glory.

Shout it from the rooftops and in the public square. Say Hallelujah. Say Amen.

All photos courtesy of Lewis Abramson.