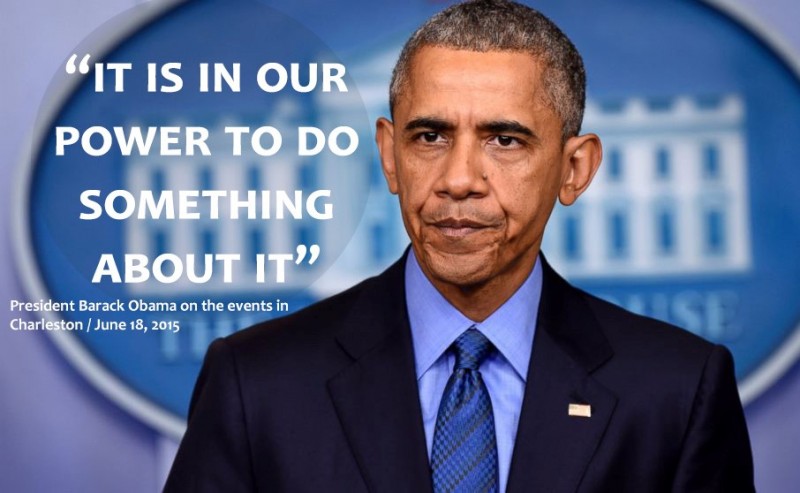 [vc_row][vc_column][vc_column_text]In light of the tragedy that occurred in Charleston, South Carolina on Wednesday night, it is difficult not to look once more at the gun control policies currently in place in the US.

What happened?
If you haven’t heard, on Wednesday June 17, 2015 a young male entered Emanuel African Methodist Episcopal Church in Charleston, SC, during an evening prayer meeting. He attended the meeting for close to an hour, before taking out a concealed gun and opening fire. The man killed 9 people, including the pastor, Reverend Clementa C. Pinckney, and injuring one other.

Police proceeded with the investigation as they would a hate crime and began a search for the shooter, who remained at large after leaving the church. On Thursday June 18, 2015 a suspect was taken into custody and has been identified as Dylann Storm Roof, 21.

On Friday June 19, 2015 it was released that Roof admitted to being the shooter and that he committed this crime ‘to start a race war’. Family and friends of the victims, as well as the Charleston community at large are left heartbroken.

This tragedy is not the first

Unfortunately, dealing with the aftermath of a tragic shooting is not a new situation for the US.

The number of active shooter events has grown over the last few years. An article in The Independent refers to an FBI study on active shootings between 2000 and 2013. The report indicates that in the first seven years of the study, there was an average of 6.4 active shootings per year. And the last seven years of the study found that there was an average of 16.4 shootings per year.  That number is more than double the average of the previous years and includes recent mass shootings such as the Sandy Hook Elementary School shooting in Newtown, Conn.

After the events at Sandy Hook, many people began to think seriously about the gun control laws in this country. But as the shock, horror and news coverage of the event died down, so too did the interest in policy change.

With the events in Charleston, and the general and undeniable rise in gun-related deaths over the past few years, there is hope that the discussion surrounding gun control will make its way back onto the table.

President Obama, in his official remarks about the event in Charleston, indicates that he is in favor of this.

“At some point, we as a country will have to reckon with the fact that this type of mass violence does not happen in other advanced countries. It doesn’t happen in other places with this kind of frequency… It’d be wrong for us not to acknowledge it, and at some point, it’s going to be important for the American to come to grips with it and for us to be able to shift how we think about the issue of gun violence collectively,” — President Barack Obama on Thursday, June 18 2015 – via The Washington Post

Will talking about, or changing, gun control laws affect the rising number of active shooter incidents?

It is difficult to say whether stricter control over firearms in the US will lessen the number of tragedies that appear in our news.

However, the article in The Independent mentioned a study that looks at the correlation between gun restrictions and the number of deaths by firearms by state. The study, conducted in 2011 by economist Richard Florida, found that states with at least one gun restriction (including assault weapons’ bans, trigger locks, and safe storage requirements) have fewer firearm deaths.

(Note: In this study and correlating chart, the deaths counted are not limited to active shootings and include other incidents such as suicides, acts of self-defense and accidental deaths by firearm)

While this data only indicates a correlation, it is suggestive that firearm restrictions may be able to help the growing problem in this nation.

The details discussed in this post are just a few basic facts regarding gun control. There are many strong and varied opinions on this subject and the national debate, if it begins, will be a long one. More studies will be conducted and other factors will need to be taken into account before a consensus can begin to be drawn, but hopefully this post reminds readers that the issue of gun control remains unresolved in the US.

As President Obama stated in his address regarding Charleston, guns affect us as a nation and are something to be thought of collectively, not just by our policymakers. With time, the tragedy that occurred in Charleston need not be solely remembered as a senseless loss of life if it sparks a renewed debate about gun control in the US.