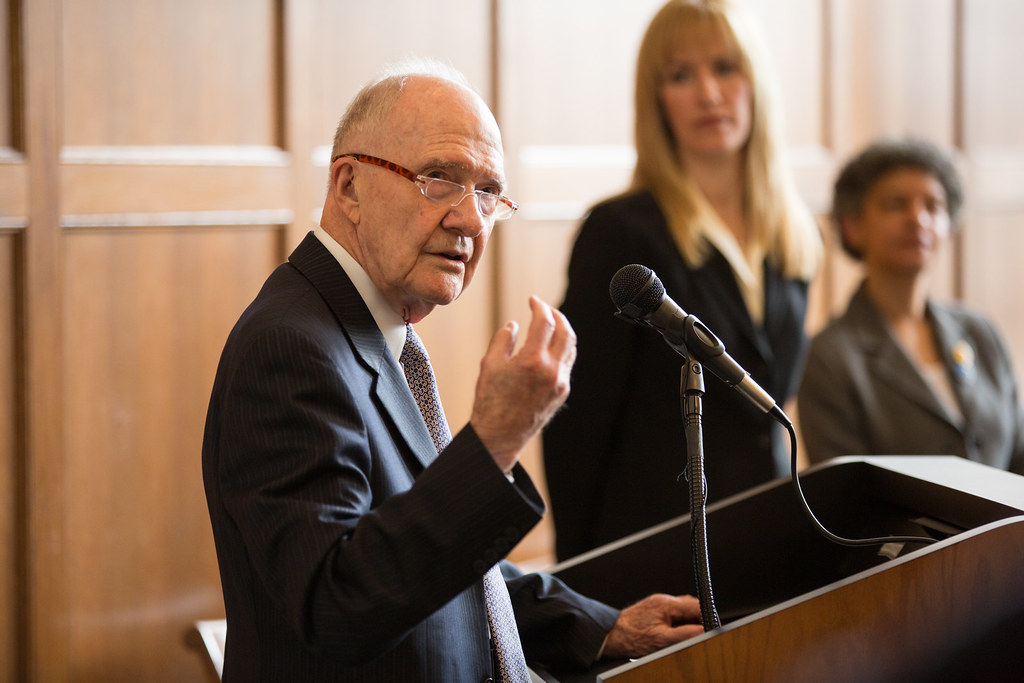 Retired Air Force Lieutenant General Brent Scowcroft died August 6th at the age of 95.  Since his death, there have been numerous tributes to him by those who knew him and served with him.  Those remembrances have highlighted his over six decades of service to this nation, as a military officer, as National Security Advisor to Presidents Gerald R. Ford and George H. W. Bush, and as a strategist and key advisor both in and out of government in the center of some of the most momentous national security policy decisions of modern times.

What has received less attention in these tributes is the key role that Brent Scowcroft played in strengthening the “special relationship” that has marked U.S.-UK relations since the Second World War.  Britain and the United States have enjoyed a unique relationship, an alliance grounded in a shared vision of an open, democratic rules-based liberal world order that they built together after World War II.  Even though both countries could—and often did—disagree on how best to implement that vision, both understand the common values and interests that vision represented.

As President Bush’s National Security Advisor in mid-September 1989, Scowcroft found himself at the Economic Club of New York, sitting next to John Major, a nervous newly appointed British Foreign Secretary, in an elegant wood paneled room of a mid-town Manhattan hotel.  It was the eve of the opening of the United Nations General Assembly.  The audience included many leading members of New York’s business, financial, and foreign policy elite.  John Major delivered a standard speech on the importance of the transatlantic relationship, drafted by the Foreign Office, but when the question and answer period came, he looked visibly ill-at ease.

Unlike Scowcroft—who had a doctorate in international relations from Columbia University and had taught at both his alma mater, the U.S. Military Academy at West Point, and the U.S. Air Force Academy—Major had never been to university and had only had a few weeks of intense study of international affairs while on holiday in Spain.  Sensing his younger British colleague’s discomfort, Scowcroft deftly took over the question period and delivered a virtuoso performance.  Scowcroft treated Major with the utmost respect and the new British Foreign Secretary appreciated the cover and the courtesy.

What was so evident that night was not only Scowcroft’s personal warmth, kindness and generosity, but also his exceptional grasp of international relations.  The Soviet empire was already on the ropes, and the Berlin Wall would fall two months later.  President Bush and his National Security Advisor were already shaping the contours of a new relationship with the Soviet leader, Mikhail Gorbachev, and carefully navigated the U.S. and its allies through the most substantial realignment in international relations since the end of World War II and unique because it was accomplished without violence.  The period 1989-1993 was a period of global transformation, aptly described by Bush and Scowcroft in their book, A World Transformed.  It began with the collapse of the “Iron Curtain,” saw the reunification of Germany and the end of the Soviet Union, and ended with the mobilization of an unprecedented global coalition to rebuff Saddam Hussein’s invasion of Kuwait.  During that period, Britain was America’s closest ally. That evening in September 1989, a member of the audience asked Scowcroft what the “Special Relationship” meant to him.  His answer was deceptively simple: “Trust.  Having someone on the other end of the telephone whose first reaction is “how can we help?”  Scowcroft’s kind and thoughtful actions that evening was consistent with his philosophy of international relations.  He was an “enlightened realist”, a firm believer in American global leadership exercised through alliances.  To Scowcroft and President Bush, none was more important than America’s relationship with Britain.

In dealing with the extraordinary international challenges from 1989 onwards, President Bush had a trusted but difficult ally in British Prime Minister Margaret Thatcher.  She had had a long and intimate friendship with Ronald Reagan, which had begun years before either of them had been elected President or Prime Minister.  They were ideological soul-mates—both fierce anti-communists and robust champions of free markets and free trade.  Although President Bush shared these values, he was never an ideologue.  Thatcher had become accustomed to lecturing and occasionally dominating Reagan; President Reagan seemed comfortable with this, but President Bush was not.  Bush and Thatcher did not share a pre-existing friendship.  Cocooned in her unique relationship with President Reagan, Thatcher had neglected to cultivate a close relationship with Reagan’s vice president and likely successor.

In the 1970s, both Brent Scowcroft and Margaret Thatcher had been Soviet hawks, skeptical of the value of détente.  By the late 1980s, however, President Bush, Brent Scowcroft, and Prime Minister Thatcher agreed that Mikhail Gorbachev was someone the West could work with to end the Cold War.  German reunification, however, presented a significant challenge for the Bush-Thatcher relationship.  To end the Cold War, Bush understood that there had to be a solution to the century-old “German question.”  To Bush and Scowcroft, the ideal outcome was a reunified Germany within NATO.  In that effort, they found an eager partner in West German Chancellor Helmut Kohl, but the prospect of integrating a reunified Germany into NATO and the European Community appalled Mrs. Thatcher.  Her formative experience had been 1940—Britain’s “finest hour” standing defiantly and successfully against Nazi Germany.  Mrs. Thatcher even convened a group of experts on Germany to a day-long seminar at Chequers, the Prime Minister’s country retreat, to help her understand the potential threat posed by a reunified Germany.  Brent Scowcroft was acutely aware of Mrs. Thatcher’s concerns.  It took all of his and President Bush’s patient, personal diplomacy to persuade Mrs. Thatcher that a reunified Germany within NATO and the European Community was a prize worth winning.  Margaret Thatcher graciously acknowledged Scowcroft’s pivotal role in this relationship in a personal cable to him when Scowcroft’s wife, Jackie, was dangerously ill.  It concluded, “We, all of us, from the President down, depend on you very much.  You are an absolute tower of strength.”  George Bush and Margaret Thatcher respected and trusted each other, but the personal chemistry was never as strong as it had been between Reagan and Thatcher.  Brent Scowcroft was the emollient in the relationship, reducing the friction enabling these two world leaders to work effectively.

The rapport Brent Scowcroft established with John Major in 1989 helped smooth the transition when, in December 1990, Major succeeded Thatcher as British Prime Minister.  Later, in his autobiography, John Major commented on how relaxed and easy his first formal bilateral with President Bush was: “There was no hesitation. No unease. No holding back. No probing to find out the other’s position. After a few relaxed courtesies we turned to business.” Brent Scowcroft’s quiet, personal diplomacy had set the tone and helped established the trust that sustained the Bush-Major relationship for the remaining two years of the Bush Presidency as they prosecuted the war against Saddam Hussein and dealt with the collapse of the Soviet Union and the ethnic cleansing in the Balkans.  In 1993, on Prime Minister Major’s recommendation, Her Majesty Queen Elizabeth II honored General Scowcroft with an Honorary Knighthood in recognition of his contribution to the “Special Relationship.”

Diplomacy requires tact, discretion, courtesy, graciousness, high intelligence and the ability to build lasting relationships of trust.  Brent Scowcroft had all of these qualities in abundance.  A soft-spoken man but with strong views, Scowcroft worked with—and had been buffeted by—some of the largest figures in national security policy, on both sides of the Atlantic.  He was at the center of countless key policy decisions, but typically the man in the background rather than the man out front.  He challenged orthodoxy, but rarely people.  He was fond of saying that the smartest thing he ever did was to surround himself with people smarter than he—which was difficult to do.  He garnered respect from all sides of the aisle, worked harder and longer than anyone else, and earned a trusted reputation for “speaking truth to power.”

In addition to his contributions to sound policy, Brent Scowcroft will also be remembered for having established a sound model for the process by which policy is made and how a president’s National Security Advisor should best function.  Developed in reaction to the high-profile, globe-trotting Kissinger model, the Scowcroft model envisaged the National Security Advisor as a behind the scenes coordinator; an honest broker who managed the National Security Council process and ensured that the often differing viewpoints of key foreign policy agencies—State, Defense, Treasury, the intelligence community, and others—were presented to the President.

Most of all, Brent Scowcroft should be remembered for the moral compass that underscored an unrelenting commitment to service, a determination to base policy on national interest grounded in the best analysis that could be brought to bear from whatever quarter, and an unwavering sense of his own humanity and the compassion that came with it.

In 2009, the Air Force Academy established the Brent Scowcroft Professorship in National Security Policy to commemorate his distinguished service to his country and to serve as a continuing reminder of the professionalism, integrity, and critical intellect that marked that service.  When that professorship was established, Scowcroft’s charge was, again, deceptively simple—“teach cadets not what to think, but how to think.”  These days, such a mandate could not be more important, and not just for military academies.

General Scowcroft’s death robs not only the United States, but also Britain and all of America’s allies, of its wisest soldier-scholar-statesman, its finest thinker and practitioner.

Today, the U.S.-UK special relationship does not reflect the kind of mutual trust, shared vision, and foundation of common values and interests that had been its defining character.  But it can be again.  To honor General Scowcroft’s memory, we propose that the U.S. and British governments take the initiative to restore the trust now so badly frayed between Washington and London.  The relationship is too important, today’s political environment too fragile, and the stakes too high to assume this critical relationship will endure without proper sustenance.  Senior officials from each government, committed to reinvigorating the special relationship should be appointed to coordinate an ongoing strategic dialogue, culminating in an annual meeting of the President, Prime Minister, and senior cabinet ministers to chart policies on a full range of global and regional issues.

And so, we mourn the passing of a great and good man, a master strategist.  Like Senator Claiborne Pell, Brent Scowcroft was the kind of public servant America’s Founders hoped for—a man of principle, unquestioned and unquestionable integrity, humility, and decency.  Brent Scowcroft was a soldier-scholar-statesman with great instincts and impeccable judgment who helped steered the world through the biggest and most dangerous realignment of global politics since the end of the Second World War.  We may not see his like again.

Dr. Ray Raymond is a former British Diplomat and Emeritus Professor of Government and History at the State University of New York Stone Ridge.  He is also Adjunct Professor of Comparative Politics and International Relations at the U.S. Military Academy at West Point, and Adjunct Fellow at the Pell Center for International Relations, Salve Regina University, Rhode Island.

Dr. Schuyler Foerster is a retired Air Force officer who taught at the U.S. Air Force Academy as the Brent Scowcroft Professor for National Security Studies.  He currently is principal of CGST Solutions and is a visiting professor at Colorado College and Masaryk University in the Czech Republic.

Raymond and Foerster are coauthors of “The US-UK Special Relationship at a Critical Crossroads,” Issue Brief, The Atlantic Council, 21 July 2017.