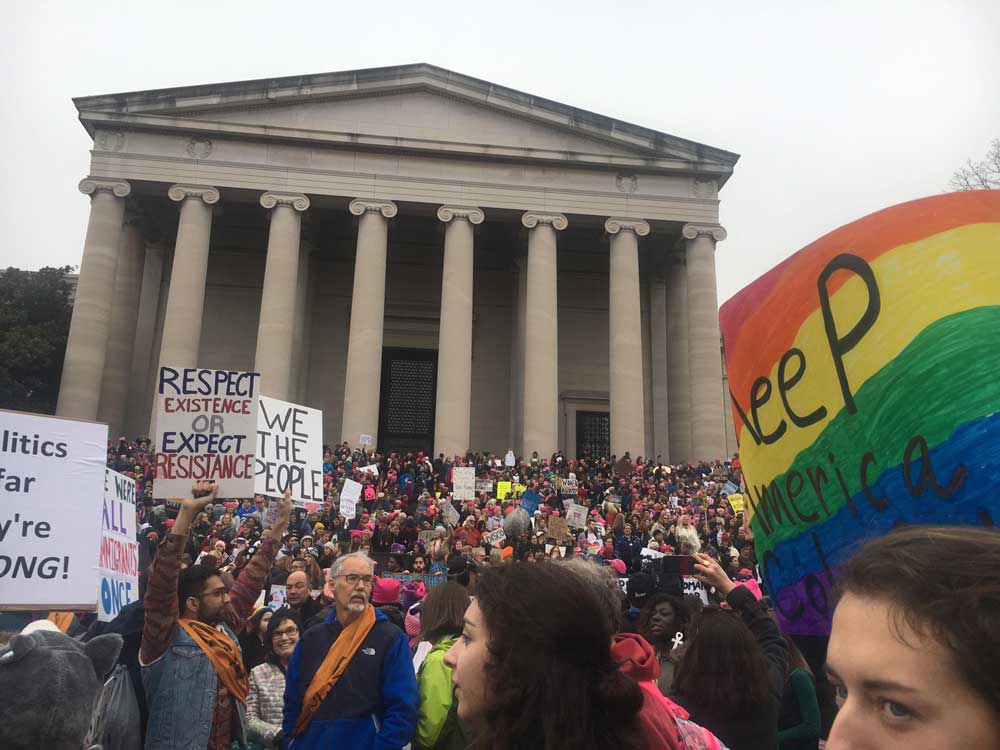 The following blog is a personal account of the Women’s March on Washington by Sarah Morehouse.

January 21, 2017, the day after the inauguration of President Donald Trump, marked “the largest day of protests in U.S. history.”

Washington D.C. served as the epicenter of this movement. The Women’s March on Washington began as a grassroots movement, intended to, “send a bold message to our new government on their first day in office, and to the world that women’s rights are human rights.” This movement, began in the nation’s capital, evolving into a global movement as sister marches took place on all 7 continents across the world. There were an estimated 5 million protesters worldwide. Millions of people in various cities protested peacefully across the United States. The largest protests took place in New York with an estimated 400,000 people, Washington D.C. with an estimated 500,000 participants, and L.A., where the protest assembled a staggering 750,000 individuals. As a psychology major, the fact that no arrests were made is almost inconceivable. Social psychologists have proven time and time again that, though “groups provide us with the opportunity to reach heights far greater than any individual might accomplish… groups also have the potential to produce unimaginable destruction.” In a group setting there is a tendency for deindividualization, or loss of self awareness, to occur. As a result, people are “less likely to follow normal restraints and inhibitions… (as) the group seems to make some behaviors acceptable that would not be acceptable otherwise.” This accounts for the tendency of protests to devolve into violent riots, and the larger the group, the more susceptible people are to groupthink and mob mentality. The fact that the “largest day of protests in U.S.  history” yielded no arrests is impeccable, and accentuates the beautiful message behind the protests, that love, not hate, makes America great.

Words cannot describe the sense of utter unity and empowerment that came from being apart of such an incredible movement. At the National Mall, 500,000 people formed a sea of pink that spread, seemingly endlessly, in every direction.

The crowd encompassed individuals of various demographics, race, religion, sexual and gender orientation, and age.  For example, age ranged from young children, propped on their parents shoulders, holding signs with expressions such as, “fight like a girl” and “boys will be boys is NOT an excuse” to individuals in their 70’s and 80’s with signs, such as “Now you’ve pissed off Grammy” and “I can’t believe I still have to protest this.” As women chanted, “my body my choice,” men echoed back, “her body her choice,” and numerous signs advocating for intersectional feminism could be seen throughout the crowd.

Not solely for women’s rights, the march also served as a platform to raise awareness for other marginalized populations across the United States and the world. Among signs and chants advocating for the equality of women arose awareness of – and support for – a plethora of issues, including but not limited to: racial injustice, refugees and immigrants, the LGBTQ+ community, climate change, accessible health care, and religious freedom.

Though extremely crowded, people literally on each other toes, the attitude of the crowd remained extremely positive and even exultant. The sheer number of people marching in Washington, and around the world created a sense of community and togetherness that brought about a palpable feeling of hope throughout the crowd. Though every individual had their own personal reason for marching, a general message was clear: we will not go back in time, the drive for equality will continue on, and those propagating human rights violations among all marginalized individuals should expect dissent and resistance. More than just a march, January 21st signifies the beginning of a social movement, ensuring that the original tenets of America remains– “that all people are created equal, that they are endowed by their Creator with certain unalienable Rights, that among these are Life, Liberty and the pursuit of Happiness.”