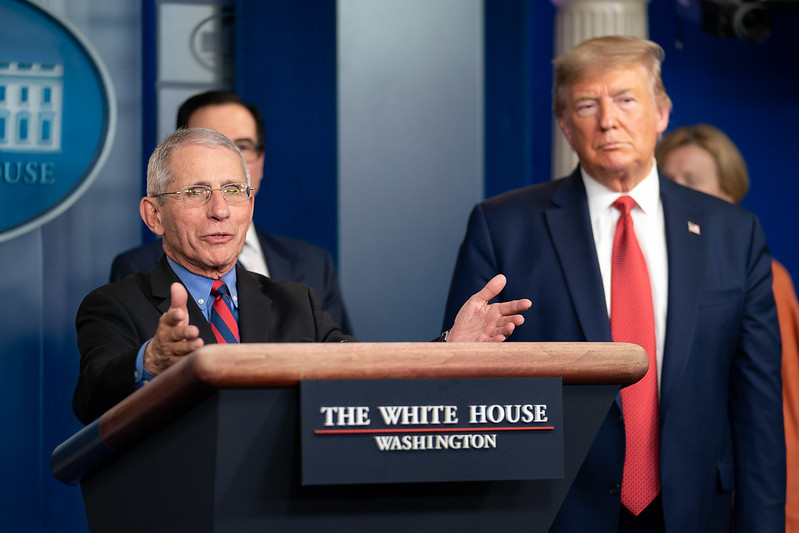 In what would have been a shocking twist in any other administration, over the weekend, journalists began reporting that the White House was circulating talking points questioning the judgment and credibility of Dr. Anthony Fauci, the director of the National Institute of Allergy and Infectious Diseases.  President Trump, himself, told Fox News that Fauci, who had increasingly distanced himself publicly from the pandemic characterizations and recommendations of the president, “is a nice man, but he’s made a lot of mistakes.” In an op-ed earlier this week in USA Today, White House trade official Peter Navarro questioned Fauci’s credibility, warning that he greeted the esteemed doctor’s recommendations with skepticism.  White House Deputy Chief of Staff Dan Scavino posted an editorial cartoon on his personal Facebook page portraying Fauci as a gushing faucet whose cold water messages were drowning the economy and the country’s return to normal life.

The attacks on Dr. Fauci aren’t a coincidence.  They are a campaign designed to discredit Fauci, one of the most well-regarded public health officials in the world because his willingness to tell the truth to the American public puts him at odds with the perceived political needs of the president.

This isn’t the first-time this has happened.  In fact, President Trump has a long and troubling record of not just lying, but of attacking any independent source of news or information that he sees as a threat to his grip on power:

The common thread that runs through all of these examples is the president’s apparent desire to undermine the credibility of any independent source of information—from Google to the CIA—that dares to offer a view different from that favored by Donald Trump, himself.

This week, we find Dr. Fauci’s reputation under assault, and even the most-casual observer can link it easily to his willingness to tell the American public the truth about a pandemic that appears only to be intensifying all over the country—a reality the president believes hurts his political chances this fall.

It’s against this backdrop that so many viewed with alarm the reporting in Tuesday’s New York Times about a plan to shift the collection of COVID infection data away from the CDC and transfer that function to the Department of Health and Human Services—whose assistant secretary for public affairs is long-time Republican political strategist Michael Caputo.  The administration’s explanation of the switch, detailed by the Times, is that CDC’s system was antiquated and cumbersome.  But researchers, modelers, and public health officials all over the world rely on CDC’s data which is generally regarded as credible and transparent.  The concern—whether valid or not—is that individuals at HHS—who are traditionally more political than the public health officials at CDC—would be in a position to manipulate the public’s understanding of the true extent of the pandemic to benefit the president’s political fortunes.

Ultimately, our politics, like so many things in life, run on trust, and after 20,000 documented lies, repeated attacks on independent sources of information, as well as smears and obfuscations, many Americans simply don’t trust President Trump or his administration.  That’s not politics and that’s not bias: that’s the fruit of efforts to distort and mislead over years.