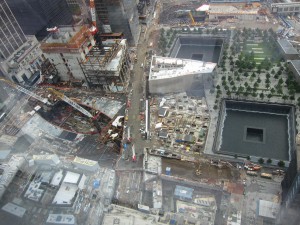 Today’s Rising Terrorist Threat and the Danger to the United States: Reflections on the Tenth Anniversary of The 9/11 Commission Report | Bipartisan Policy Center

Ten years after releasing a landmark report on the Sept.11, 2001 terrorist attacks, the same 9/11 Commission is raising new alarms about the threat of cyber attacks to the United States. Their final analysis may appear grim: the country is practically asleep at the wheel when it comes to preventing attacks to our critical information infrastructure, just as intelligence failures left the nation vulnerable to terrorist groups like al Qaeda before 2001. The report concludes “one lesson of the 9/11 story is that, as a nation, Americans did not awaken to the gravity of the terrorist threat until it was too late. History may be repeating itself in the cyber realm.”

And in contrast to all the backslapping about what a good job the 9/11 Commission had done in forging a unanimous report from 10 commissioners, half Republican, half Democrats, no one had a good word to say about Congress. They all urged lawmakers to pass comprehensive cybersecurity legislation to let private companies work with the government to counter threats, despite concerns about privacy provisions. In addition, the authors say more transparency is needed to help a skeptical public understand the threat. In fact, one of the reasons Congress has failed to enact cybersecurity legislation is perhaps that Americans haven’t demanded it and that the government hasn’t explained clearly and in specific terms the severity of the cyber threat and what’s at stake to the public. People’s distrust after the Snowden revelations, coupled with the lack of knowledge of even highly educated people across sectors about what ‘cyberspace’ is, and how growing cyber threats may directly affect our information, businesses, and government, has so far discouraged the general public from rallying around specific cybersecurity policies and pushing Congress to pass legislation.

Congress is currently considering a number of cybersecurity bills, so this may be a good time to take action whether you’re a citizen who needs more information on the topic, or whether you’re a local or national representative who needs to better appeal to his/her constituencies!- Francesca Spidalieri, Fellow for Cyber Leadership

Some Republicans push compassionate, anti-poverty agenda ahead of 2016 contest | The Washington Post

The Washington Post reports this week that a number of GOP leaders and future candidates are taking an unexpected stance towards poverty and safety-net services. Paul Ryan, well-known for proposals to cut spending on services that help Americans of limited means, is offering a new proposal that downplays actual cuts, and he is quoted as saying, “I wanted to remove [the discussion of how to alleviate poverty] from the old-fashioned budget fight. . . .” The article refers to this shift as part of a “rebranding effort” on the part of certain Republicans, and not surprisingly, the Washington Post’s liberal blog, the Plum Line, sees the new stance as cynical and politically motivated. From the perspective of the blogger, “it’s hard to avoid the conclusion that [Ryan’s new plan is] still driven by the longstanding conservative desire to limit the help we give to the poor.” Still, there is something new in the plan, if only its packaging. This shift in emphasis may reflect a trend identified in a Wall Street Journal – NBC poll from last month, that identified a noticeable shift over the past twenty years in how Americans view poverty: “In 1995, Americans were twice as likely to believe poverty resulted from people not doing enough to help themselves out as to attribute it to external forces … [while] Americans are now as likely to blame poverty on circumstances beyond people’s control as they are to believe the poor aren’t doing enough to dig themselves out of it.” The Great Recession and its aftermath may have more Americans recognizing that circumstances can create economic difficulties we are not individually responsible for.- Joseph Grady, Senior Fellow for Public Policy

How do we learn from the past? Paul Light’s study of government failures over the past decade provides important lessons for health policy. Policymakers who don’t understand past problems, in short, are likely to repeat them. The design and implementation of the Affordable Care Act (“Obamacare”) offers a glimpse of the good, the bad, and the ugly sides of government efforts to tackle difficult policy problems.

On the one hand, millions of Americans gained health insurance coverage through expanded Medicaid eligibility, new rules on insurers extending coverage to adult children and persons with pre-existing conditions, and subsidized coverage purchased on newly created health insurance exchanges. At the same time, both the design of the ACA and its implementation underscore the limits of public efforts to heal the health care system.

The US Supreme Court will need to resolve these inconsistent opinions during the 2014-15 term. The ACA expressly states (in many places) that subsidies are only available through “state exchanges” but when it passed the law in 2010 Congress expected that most, if not all, states would set up their own marketplaces.

At the same time, the administration postponed key provisions of the law such as the employer mandate, and waived minimum coverage requirements due to a firestorm of opposition from insured individuals with bare-bones policies. More than four years after its passage, the ACA remains a work in progress whose political future is still uncertain. – Bob Hackey, Visiting Fellow for Health Policy