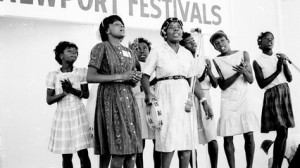 NEWPORT, R.I.− The Pell Center at Salve Regina University’s Story in the Public Square program will partner with the Rhode Island International Film Festival for an afternoon of cinematic storytelling featuring the documentaries “The War Photographers” and the festival world premiere of “The Newport Effect” on Saturday, August 9 at the Jane Pickens Theater in downtown Newport.

“Although folk music and war photography may not seem to have much in common, both are media used to publicly share the human experience,” said G. Wayne Miller, Director of Story in the Public Square. “It is only fitting that these two important movies be screened together in Newport, which has witnessed war, peace and plenty of music over its long history.”

The afternoon begins with “The War Photographers,” which recounts the personal experiences of award-winning photojournalists who risk their lives covering conflict in the world’s most dangerous war zones, past and present, including Vietnam, Iraq, Afghanistan, Somalia, Sudan and the Middle East. The following film screening, “The Newport Effect,” chronicles the history of the legendary Newport Folk Festival and its profound impact on the world of folk music and social activism. Started in 1959 by jazz impresario George Wein, the Newport Folk Festival has laid the foundation for music festivals of today.

“The Newport Effect” filmmakers Beverly Penninger and Alyson Young, and Newport Folk Festival producer emeritus Robert Jones, will be on hand to discuss the film and the festival.

Tickets are available on Eventbrite or visiting the following link: http://bit.ly/1uA0KxA

Tickets will also be available at the Jane Pickens box office on Aug. 9.

About Story in the Public Square

A partnership between the Pell Center and The Providence Journal, Story in the Public Square is an initiative to study, celebrate, and tell stories that shape the public dialogue.

To learn more about SIPS, visit www.publicstory.org and stay connected on Facebook at www.facebook.com/StoryInThePublicSquare and Twitter @pubstory.