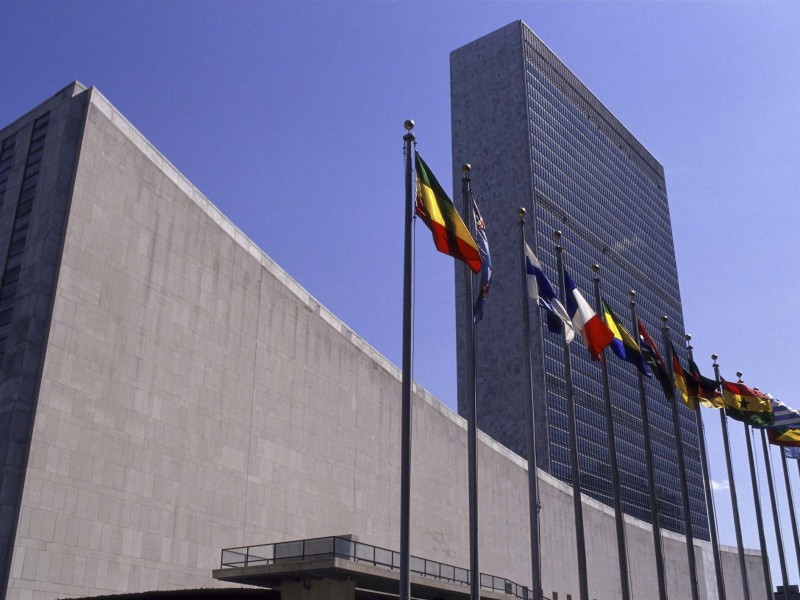 On October 28, 2015, the Pell Center and the Office for International Programs at Salve Regina University presented a lecture featuring two current United Nations employees in order to celebrate the 70th birthday of the organization through a discussion of its future goals and its effectiveness as an agency from its start up to the present day. The lecture attracted a highly engaged crowd which included members of Salve’s own prospective model United Nations. Matthias Klettermayer and Jean Victor Nkolo spoke about the UN’s sustainable development goals for 2030 as well as the history and future of the UN respectively.

Matthias Klettermayer, the Public Information Officer of the United Nations’ Division for Sustainable Development, began the discussion by presenting the differences between the Millennium Development Goals, developed in 2000, and the Sustainable Development goals which will be in effect from now until 2030. According to Klettermayer, sustainable development is the process of meeting the needs of the present without compromising the needs of the future. Klettermayer described increases in the scope of issues, the focus on individuals and the participation of non-UN actors as the main differences in the development of today’s SDGs in comparison with the older MDGs. Some of the SDG concerns are environmental, like global warming, while others are more social, like preventing the spread of Ebola, but all have a primary focus on universal improvements in the quality of life for individuals. In contrast, the MDGs have a more specific focus on averages. For example, one MDG focused on reducing the number of people living in extreme poverty by half. Although the goal was achieved, with the number of people in extreme poverty falling from 2 billion people in 1999 to 800 million people in 2015, its effects were not felt universally.

According to Klettermayer, the Sustainable Development Goals will be a more universal and focused attempt to “leave no one behind”. The seventeen goals, which hope to promote positive changes on issues like gender equality, clean water, climate change, hunger and more, require the full cooperation of all of the UN’s 193 member states in order to have the greatest impact. To simplify the SDGs for a general audience, Klettermayer marketed the goals as pertaining to what he calls the Five Ps: people, prosperity, planet, partnership and peace. In addition, he asked interested audience members to follow @SustDev on Twitter for more information.

Next, Jean Victor Nkolo, a twenty year employee of the UN who has participated in ten peacekeeping missions throughout his career, took a step back in order to highlight the origin of the UN and its past objectives. In addition, he explained some of the organization’s successes as well as its failures in order to discuss the possible challenges it could face in the future. Nkolo said that, “the way the world looked in 1945 is not the way that the world looks today”, but that the UN has gone largely unchanged within those 70 years. The UN was founded by victors of World War II and other states of merit who desired to end the atrocities of global war and create a more harmonious society. While the main objective of the UN remains, its membership and scope has changed. The UN still extends the power of the veto to its Security Council of permanent members (The United States, France, Russia, China and England) despite the fact that other nations like India and Brazil are becoming increasingly influential as a result of their recent growth and industrialization. Nkolo continued by saying that, it is important to remember that the UN has made a positive overall impact on the modern world despite its overly publicized failures. He believes that the next step for the UN will be deciding how best to reform its most long-standing institutions in order to keep up with modern demands.

The lecture ended with time for audience questions. Nkolo concluded the lecture by saying that“peace is like raising a child, it takes a village” because “we are all in this, and it does not concern the UN only”. – Hannah Lussier