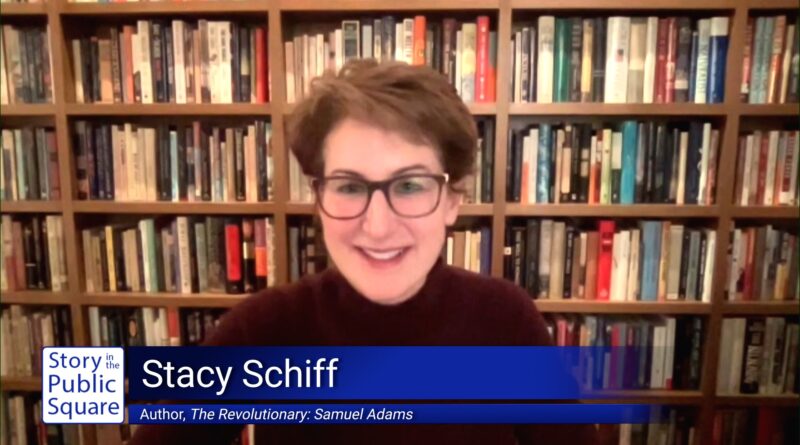 The American revolution had many fathers.  But Stacy Schiff paints a picture of Samuel Adams—the cash-strapped publisher and political leader from Boston—as, perhaps, the essential founder whose spirit and maneuvering shaped so many of the seminal events of the revolutionary era.

Schiff is the Pulitzer Prize-winning author of “The Witches: Salem, 1692,” “Cleopatra: A Life,” which was one of the New York Times’s Top Ten Books of 2010 and won the PEN/Jacqueline Bograd Weld Award for biography and was translated into 30 languages.  Schiff is also the author of “Véra” (Mrs. Vladimir Nabokov), winner of the Pulitzer Prize; “Saint-Exupéry,” a Pulitzer Prize finalist, and “A Great Improvisation: Franklin, France, and the Birth of America,” which was the winner of the George Washington Book Prize, the Ambassador Award in American Studies, and the Gilbert Chinard Prize of the Institut Français d’Amérique.  She has received fellowships from the Guggenheim Foundation and the National Endowment for the Humanities and was a Director’s Fellow at the Cullman Center for Scholars and Writers at the New York Public Library. Among other honors, she was named a 2011 Library Lion by the New York Public Library, a Boston Public Library Literary Light in 2016, and in 2017 received the Lifetime Achievement Award in History and Biography from the New England Historic Genealogical Society. Awarded a 2006 Academy Award in Literature from the American Academy of Arts and Letters, she was inducted into the Academy in 2019. Schiff has written for The New Yorker, The New York Times, The Washington Post, The New York Review of Books, The Times Literary Supplement, and The Los Angeles Times, among many other publications. Her latest book, “The Revolutionary,” was published in 2022.

On this episode of “Story in the Public Square,” Schiff says Adams’ efforts to burnish the Massachusetts responses to the Stamp Act is what ushered Adams to “center stage” in politics.  She adds that Adams’ moral rectitude set him apart, saying, “he is idealistic and unwavering to a degree which I think surprises everyone, even his closest friends.”