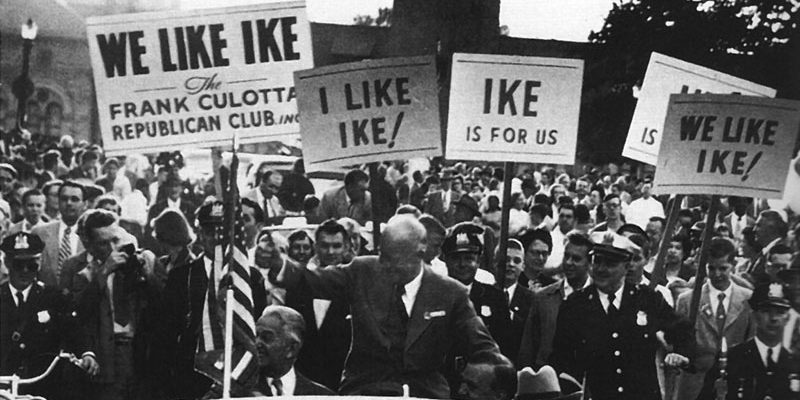 On April 16, 1953, five weeks after the death of Soviet premier Joseph Stalin, Eisenhower delivered the “Chance for Peace” speech to the American Society of Newspaper Editors.  It is a classic of cold war political warfare with the Soviet Union—but it’s also a beautiful exposition of the concept of “opportunity cost.”

Eisenhower described in the most human terms how the arms race between the Soviet Union and the United States had material costs that affected everyone.  He noted that the cost of one modern heavy bomber was a modern school in 30 American cities; two electric power plants, each serving a town of 60,000; or 2 fully equipped hospitals. A fighter aircraft cost a half-million bushels of wheat, Eisenhower said.  A destroyer for the Navy cost the same as new homes for 8,000 people.

I was reminded of all of this, watching President Trump’s rally in North Carolina because his preference for injecting controversy and chaos into American politics may be good for him politically, but it’s a painful opportunity cost for anyone who thinks campaigns should be a battle of ideas.

Every time the president tweets something offensive, reporters are going to ask Democratic candidates what they think of it.  We saw that with the “send them back” tweets over the weekend.  He doubled down on that argument at the North Carolina rally—and that coverage will squeeze time away from the meaningful debate Democrats are having about whether “Medicare for All” is better policy than adding a “public option” to Obamacare.

Every time the press flocks to a lie the president tells about a Congresswoman’s record to suggest she loves al Qaeda is a moment where Democrats won’t be able to have a meaningful conversation about climate change.

And every time the media reports (even without endorsement) the president’s rant that “Democrats don’t love America” is a moment where we lose sight of the border patrol officer who asked a 3 year old Honduran girl to choose which parent—her mother or her father—would be separated from her and sent to Mexico.

That’s the point.  In flooding the information-space with so much provocation—even material that is offensive, made-up, or completely fanciful—the president effectively controls the narrative, the story the press covers and we discuss.  It is no coincidence that the July 17 rally in North Carolina was scheduled for the same day Robert Mueller was originally scheduled to testify to Congress.

There are some who think Democrats should fight fire with fire.  I’m not sure what that actually means, but I am certain that to do so would make worse the dysfunction and dangerously super-heated nature of our politics.

But recognizing the president’s tactics for what they are—and calling them out—is an essential first step.  Speaker Nancy Pelosi was right this week to call the president’s efforts an attempt to distract the public from the questions of criminality plaguing his presidency; the ethical failings of his cabinet; and the disconnect between the administration’s policies and American values.

Knowing someone is trying to manipulate you and your decision making is an essential first response, but in the longer-term, Democrats and their allies are going to have to find a way to diminish the president’s appeal and his ability to sow chaos and dominate the debate.  Anything else just risks a repeat of 2016.