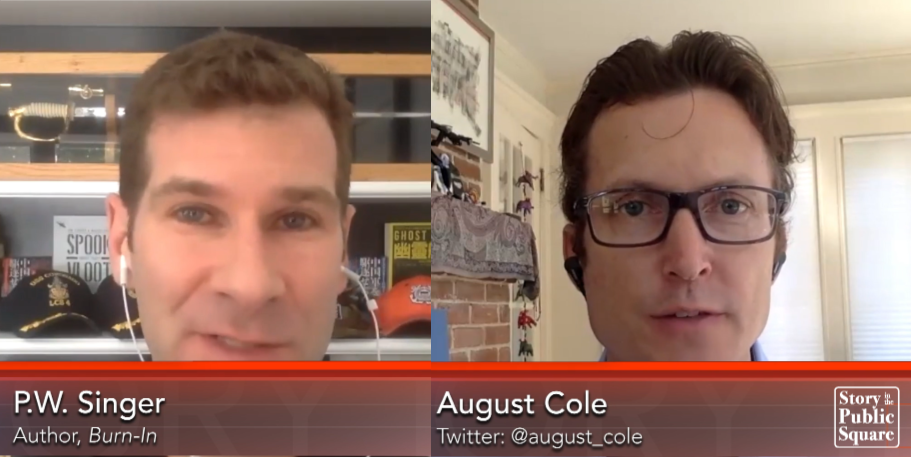 A treatise on the future of technology and security usually is thick and often inaccessible, but P.W. Singer and August Cole turn their expertise on emerging technology and national security into a page-turning techno-thriller set in the not-too-distant future.

August Cole and Dr. Peter W. Singer are co-authors of the best-seller “Ghost Fleet: A Novel of the Next World War” and “Burn In: A Novel of the Real Robot Revolution.”  Cole is an author exploring the future of conflict through fiction and has reported on defense for The Wall Street Journal and MarketWatch.com among others.  He is a non-resident senior fellow at the Brent Scowcroft Center on Strategy and Security at the Atlantic Council, where he directed the Art of the Future Project, which explores creative and narrative works for insight into the future of conflict, from its inception in 2014 through 2017.  Cole works on creative futures at SparkCognition, an artificial intelligence company and is a regular speaker to private sector, academic and U.S. and allied government audiences.

Singer is a strategist at New America.  He has been named by the Smithsonian as one of the nation’s 100 leading innovators, by Defense News as one of the 100 most influential people in defense issues, by Foreign Policy to their Top 100 Global Thinkers List, and as an official “Mad Scientist” for the U.S. Army’s Training and Doctrine Command.  Singer is the author of multiple best-selling, award winning books in both fiction and nonfiction, including “Wired for War.”  Singer is considered one of the world’s leading experts on changes in 21st-century warfare, with more books on the military professional reading lists than any other author in history.  He served as coordinator of the Obama campaign’s defense policy task force and was named to the U.S. Military’s Transformation Advisory Group, NATO’s Innovation Advisory Board.  In addition to his work on conflict issues, Singer served as a member of the State Department’s Advisory Committee on International Communications and Information Policy and as an advisor to IDS.

On this episode of “Story in the Public Square,” Singer and Cole discuss what it means to live “through a new kind of industrial revolution,” as technology progresses in future years, saying by 2030, much of the disruptive and innovative technologies as they often are, will be fairly seamless and invisible.”  While Singer said their new book, “Burn In” addresses the darker side of the technological revolution, he emphasized the potential positives, describing how algorithms based on individual preferences can enhance everyday life.