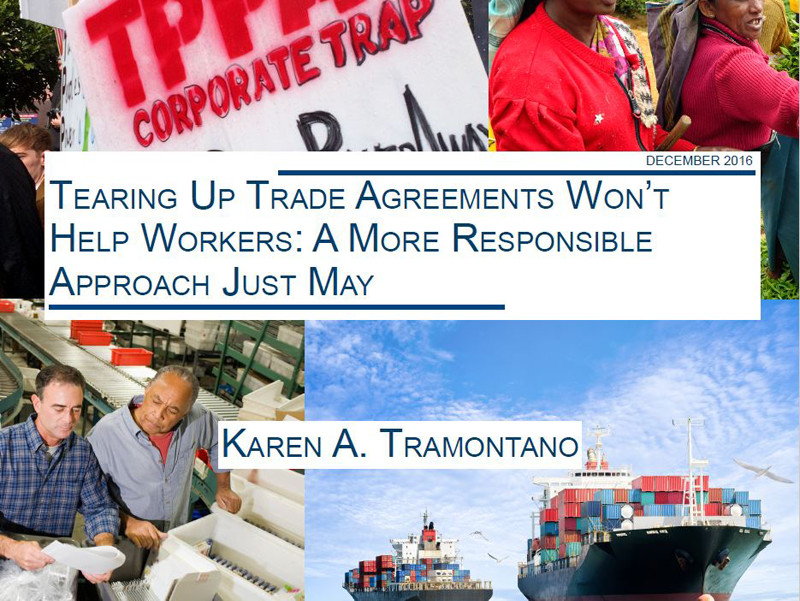 Newport, R.I. – The current heated debate over international trade is the outcome of a flawed public policy and political framework.

With growing public sentiment against trade and political leaders on both the left and right opposing international trade agreements, the United States needs a new approach to international trade that addresses the inequities many believe damage America’s national interest while preserving the good that trade does in the world.

In a new report from the Pell Center at Salve Regina University, Karen Tramontano lays out an ambitious approach to trade.  Building on the “good” in recent trade pacts, Tramontano describes an approach with three critical elements: a more robust social safety net for American workers who lose their jobs due to trade; labor rights protections for American workers and for workers in trading partners to level the playing field; and integration of the benefits of trade into the discussion of foreign assistance.

“This paper isn’t about the Trans-Pacific Partnership or NAFTA or any other trade deal that’s been negotiated,” said Tramontano.  “It’s about an approach to America’s role in the world and the vital economic and foreign policy tool that is trade,” she continued.  “In the current political environment, we need a new, holistic approach to trade in which everyone, including American workers, win.  Fortunately, such a framework is achievable by building on recent progress.”

“The United States will never cease to be a trading power,” said Pell Center Executive Director Jim Ludes. “But the debate around foreign trade today harkens back to some imagined era of American economic independence that simply never existed,” he said.  “The policy framework Karen Tramontano presents here is an important step forward if we are to preserve America’s economic leadership.”