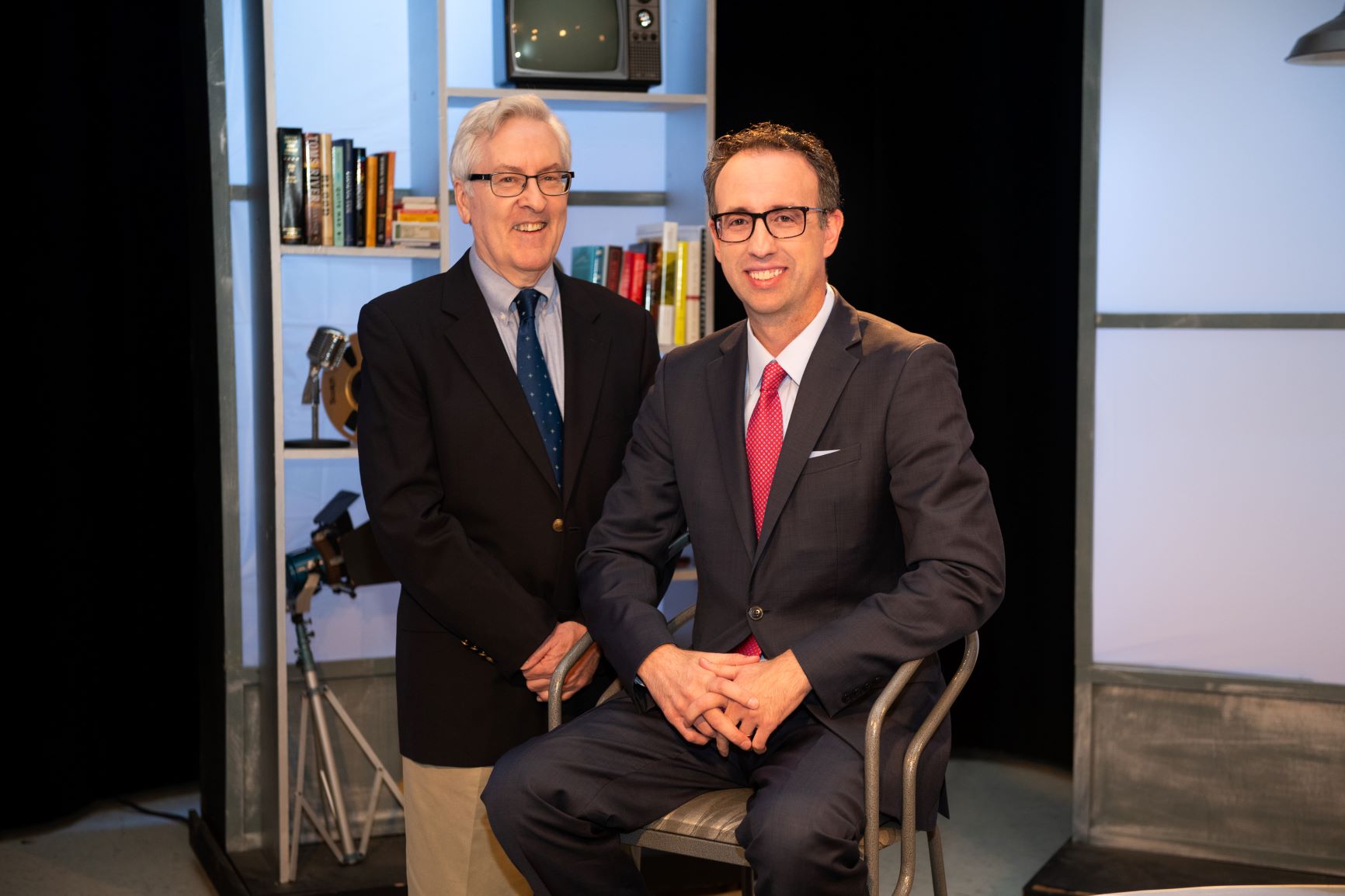 Newport, R.I. – The two-time Telly Award-winning series Story in the Public Square will continue to be broadcast across the United States with the debut of its fourth national season beginning January 6, 2020, the series announced on Tuesday. The show has been in production since January 2017 on SiriusXM Satellite Radio and in southeastern New England from its flagship TV station, Rhode Island PBS.  Story in the Public Square is currently seen in more than 80% of the nation’s public television markets.

Hosted by Jim Ludes, Executive Director of the Pell Center for International Relations and Public Policy at Salve Regina University, and G. Wayne Miller, Staff Writer at The Providence Journal, Story in the Public Square is a weekly 30-minute public television program that tries to make sense of the stories shaping public life in the United States and abroad.

“Each season brings intriguing new stories and exciting new storytellers,” said Ludes.  “In 2020, we’ll of course pay attention to the stories shaping presidential politics, but we’ll move beyond the headlines to examine the narratives that dominate public life in the United States, while we also shining a light on some under-considered stories as well.”

“The success of Story in the Public Square has always been the result of great guests who captivate our audience with insights, humanity, and a remarkable ability to tell powerful stories,” said Miller.  “Our fourth national season will be no different.”

The season will feature 26 episodes, including 24 new shows, debuting with Jamie Metzl and his depiction of the future of humanity in his groundbreaking book Hacking Darwin.

Story in the Public Square provides audiences the opportunity to hear compelling stories, and learn the story behind the stories in an accessible format where the hosts listen rather than lecture. The program offers a refreshing alternative to the standard news and public-affairs offerings. The show is produced by the Pell Center at Salve Regina University and presented by Rhode Island PBS via NETA, the National Educational Telecommunications Association.

The audio version of the series is broadcast multiple times each weekend on SiriusXM’s popular P.O.T.U.S. (Politics of the United States) channel. Story in the Public Square won Telly Awards for excellence in general politics/commentary in 2018 and 2019.  The program is supported by weekly podcasts and Miller’s regular column for The Providence Journal.

To learn more or to speak with Jim Ludes and G. Wayne Miller, please contact:

Dr. James M. Ludes is Vice President for Public Research and Initiatives at Salve Regina University in Newport, RI, as well as Executive Director of the university’s Pell Center for International Relations and Public Policy. Ludes spent the first 18 years of his career in Washington, DC, most recently building a bipartisan think tank, the American Security Project, to educate the public on a broad range of national security issues. In addition, Ludes has been active at the intersection of politics and policy, having served as a member of the Obama-Biden transition team in the Pentagon, and serving as a national security advisor to then-Senator John Kerry from 2002 to 2006.

G. Wayne Miller is an award-winning Providence Journal staff writer. He is co-host and co-producer of the weekly Rhode Island PBS/SiriusXM Satellite Radio show Story in the Public Square. A filmmaker and author of 17 books—most recently “Kid Number One: Alan Hassenfeld and Hasbro,” published in September—Miller is a visiting fellow at Salve Regina University’s Pell Center for International Relations and Public Policy, where he is cofounder and director of the Story in the Public Square initiative, a partnership with The Providence Journal. Throughout his journalism career, public-service writing, especially about children’s and adult mental health, has remained his passion.

The Pell Center for International Relations and Public Policy

The Pell Center for International Relations and Public Policy is a think tank on the Salve Regina University campus in historic Newport, Rhode Island. Its programs on domestic and international issues are designed to generate new ideas, to expand public understanding of important issues and, ultimately, to help the public and its leaders make better decisions.

Dedicated to honoring Sen. Claiborne Pell’s legacy, the center promotes American engagement in the world, effective government at home and civic participation by all Americans. We accomplish this through research and publications, public events and media programs that run throughout the year.

First published in 1829, The Providence Journal is the oldest continuously published daily newspaper in the United States. The Journal, a GateHouse Media property with headquarters in downtown Providence, has won four Pulitzer Prizes.