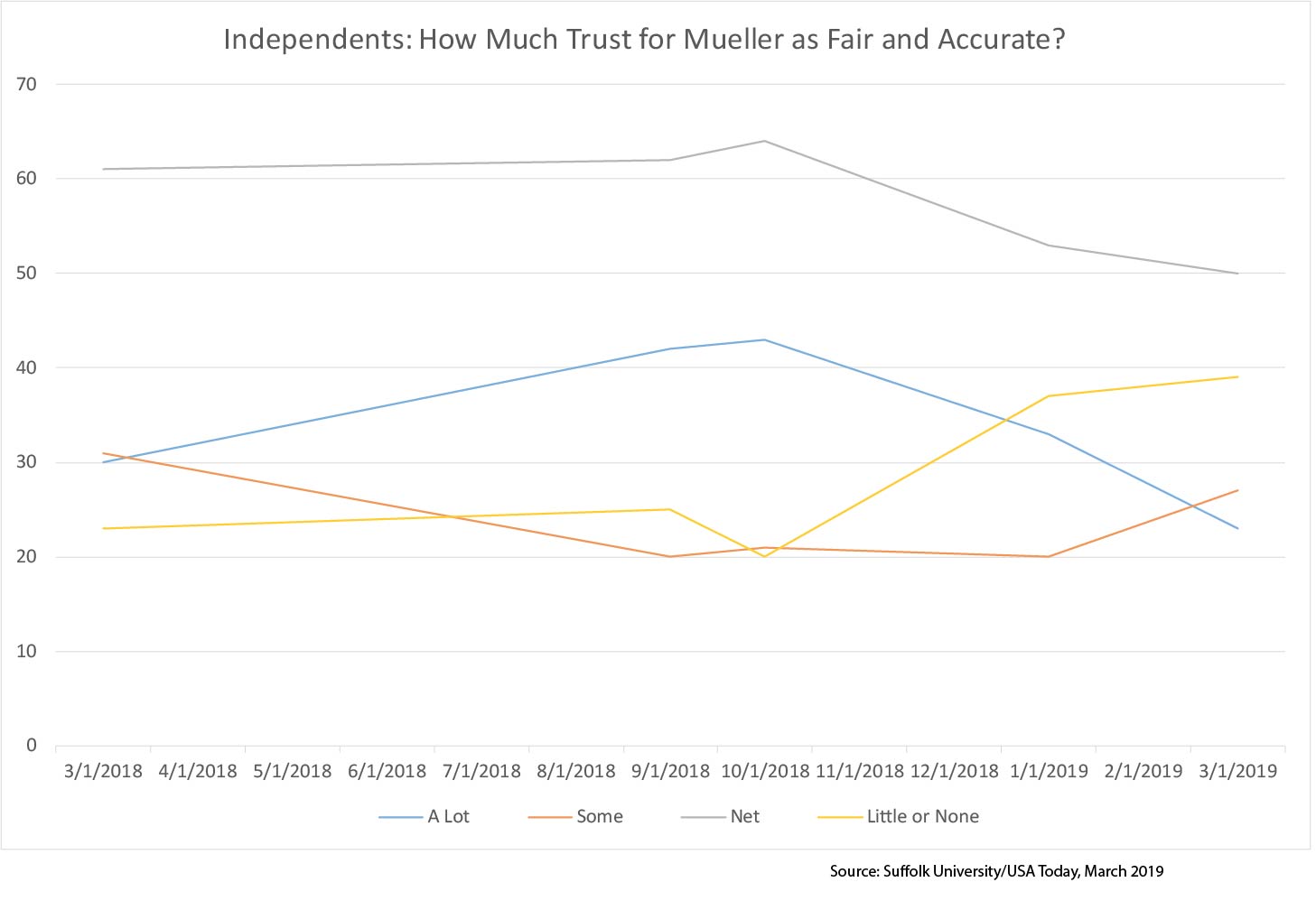 There is a competition underway to condition the American public’s response, in advance, to whatever Special Counsel Robert Mueller ultimately reports.  For the president and his allies, the message has been consistent: it’s a “witch hunt.”  For Democrats, after championing the integrity of Mueller’s investigation for months, there seems to be an effort, now, to manage expectations.

The president’s use of the term “witch hunt” in relationship to the Mueller probe began in earnest with the appointment of Robert Mueller in the late spring of 2017, but it took off on Twitter after the FBI raided Michael Cohen’s home and office in April of 2018. As indictments, guilty pleas, and convictions have mounted, so has the president’s use of the term “witch hunt” to undermine the public’s confidence in the investigation. The president’s strategy is unmistakably political, designed to condition the public’s response so that enough Americans doubt the integrity of the investigation to protect his presidency—no matter what Mueller finds.

There is some evidence that the president’s efforts are gaining ground. Over the weekend, the president was quick to tweet a headline from a Suffolk University/USA Today survey that found 50% of respondents agreed with the president’s characterization of the Mueller probe as a “witch-hunt.”  A number of other pollsters were quick to point out flaws in the way the question was asked (it was “multi-barreled,” meaning the phrasing of the question could skew results by giving the respondent more than one clause with which they might agree), but if we take that same survey and look at a different question—how much trust do respondents have in “Robert Mueller and his investigation to be fair and accurate,” we see a softening over the last year of the trust Independents and Republicans express for Mueller’s fairness and accuracy:

Those are substantial moves far outside the margins of error in these surveys.

In other words: this is a tremendous example of the power of story in the public square, because the president has thus far succeeded in raising Republican and Independent’s skepticism about the Mueller investigation in the same time-frame that Mueller has chalked up an impressive array of indictments, convictions, and guilty-pleas.  Over the last 13 months alone, Mueller:

Against these events and facts have been arrayed the tweets of the president and the coverage of Fox News, which Philip Bump, writing in the Washington Post earlier this week, shows from the same Suffolk University/USA Today survey correlates to skepticism about the Mueller investigation.

Part of what’s going on here is that it’s really difficult to understand complex issues like a sprawling, heavily classified investigation.  And so messages, simply and consistently delivered will shape the way we receive new information on that topic.

I’ve avoided predicting anything about the Mueller investigation’s outcome since it started and I’m not going to change that today.  Eventually, we’ll get some version of findings from the special counsel beyond the substantial record already available from court proceedings.  But when that day comes—whether it’s this week or next month, or a year from now—we all need to set aside our biases and the messaging we’ve heard from our fellow-partisans, and take the time to really process what’s being said and think for ourselves.