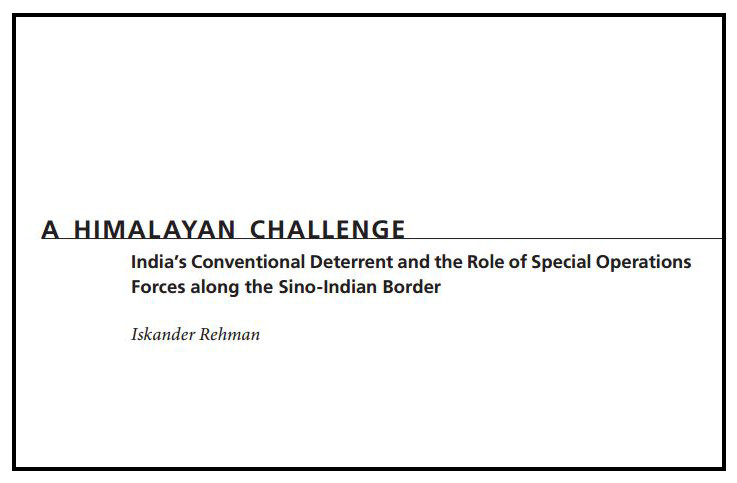 Dr. Rehman’s article aims to give a clearer picture of the security dynamic along the Sino-Indian border. It draws on field trips to the Himalayan border states of Sikkim, Himachal Pradesh, and Jammu and Kashmir as well as close to thirty interviews with intelligence officials and Indian Army (IA) and special forces officers, both serving and retired.

“Conducting research for this study was both challenging and enthralling. Challenging because few detailed, open source studies have been published on the security dynamic along what continues to form the longest disputed land border in the world. It can also be difficult for foreign researchers to gain access to interviewees willing to discuss, even in general terms, some of the security issues deemed most sensitive by the Indian government.

It was an enthralling experience  for precisely these same reasons. After many months of careful preparation and groundwork, I had the opportunity to conduct a series of interviews with senior Indian security managers–both civilian and military. Through our interactions, I learned a lot about New Delhi’s special forces, as well as its military posture and challenges along the Sino-Indian LAC, or “line of actual control.” I was also able to travel to some of the most beautiful–albeit remote–portions of the Indian Himalayan belt. My hope is that the Naval War College’s readers will find the insights gained from my research, interviews, and field trips useful for their own reflections on South Asia, special operations, and the future of mountain warfare.”

The article lays out the operational benefits to be accrued from the tailored employment of Indian special operations forces in a number of potential conflict contingencies along the Sino-Indian border. While warning against an overreliance on special operators,  it argues strongly in favor of a better integration in-between Indian special and general purpose forces.