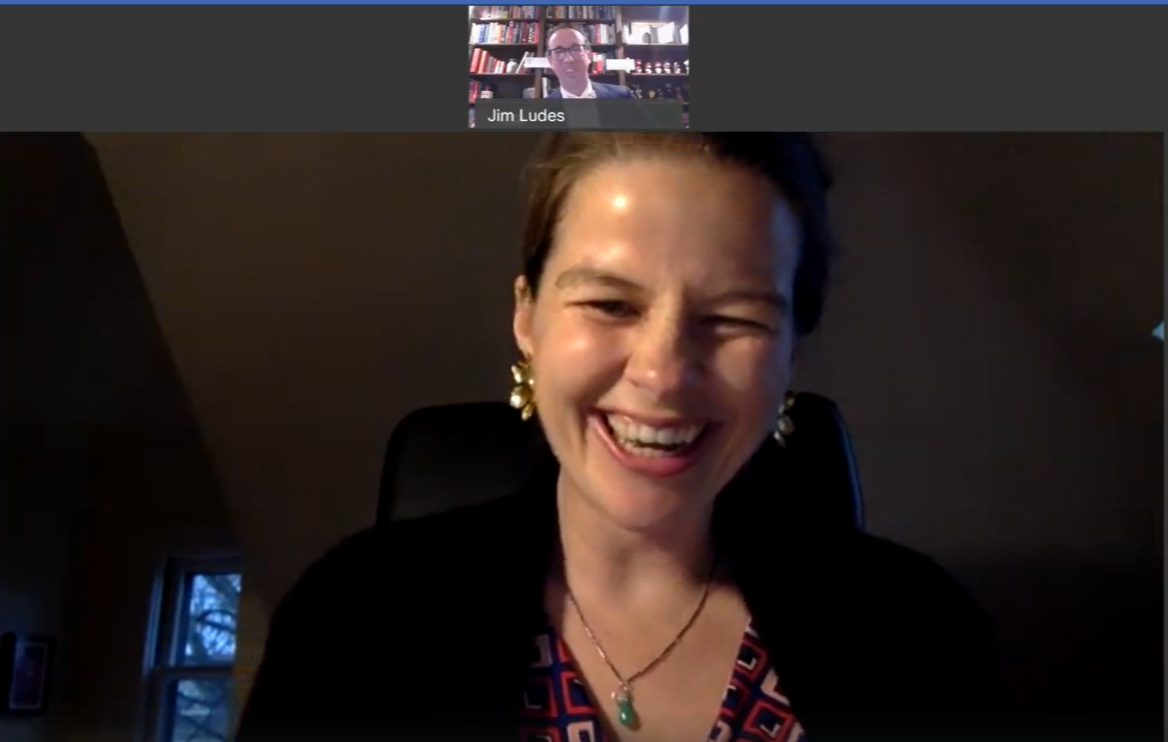 Newport RI—On April 2, 2020, the Pell Center’s Facebook page become a virtual lecture hall, welcoming hundreds of viewers for a live conversation with Elizabeth Rush, co-hosted by the Pell Center and the Rhode Island Center for the Book.  Rush is the author of “Rising: Dispatches from the New American Shore,” this year’s Reading Across Rhode Island state-wide read, a Rhode Island Center for the Book program.  Pell Center executive director, Jim Ludes, served as moderator, fielding live audience questions posted by viewers from his home office.

Rush began the conversation with a reading from “Rising,” where she described visiting the Rhode Island shore after moving there from New York, an experience that served as a source of inspiration for the book.  it took three years for Rush to take her writing from sheer facts to the narrative, lyrical quality of her writing in “Rising,” by digging into her poetic roots, she created a reader experience that gives due attention to the issues of climate change and allowed her to make a lasting impact on readers.

Rush began telling the story of climate change when she lived in Bangladesh and described feeling compelled to bring the story of sea level rise closer to home by writing about its impacts on American shores.

As she dug deeper into the effects of climate change, she realized “those who are most vulnerable to the effects of sea level rise often tend to be lower income communities of color, communities that are vulnerable in other ways too.”  Rush said this juxtaposed her expectation of writing about “second home owners in barrier island towns.”  She noted that the land values along our coastal wetlands have been historically cheap, making them a haven for displaced and indigenous peoples who could not afford to live elsewhere.

Rush described feeling an “overwhelming sense of despair” when digging deeper into understanding the effects of climate change.  She emphasized the necessity of experiencing these feelings and said it is important to “pass through feelings of fear and grief to be able to act in ways the current crisis demands.”

Recognizing the context of this conversation in the current public health crisis, Jim Ludes compared the dramatic effects of the coronavirus that have resulted from inadequate preparation to what could result from similar attitudes about climate change on a similar scale.  To his point, Rush described a study that stated, “every dollar spent on flood prevention saves six dollars down the line.”  She again noted the distribution of ill-effects felt by such crises would not be evenly distributed throughout the population and would affect more vulnerable segments of the population disproportionately.

Rush described her role as a writer to inspire positive action in the lives of readers.  She believes action begins with teaching people how to recognize the ways sea level rise impacts the world around them, then laying out the pathways for readers to make a difference in their own lives.

Rush said her optimism has surged with the changes she sees in societal engagement with climate change and people recognizing the impacts of human life on the natural world.