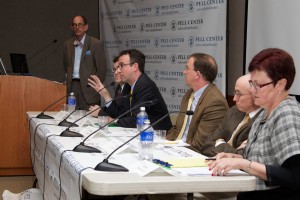 It was a full house at Bazarsky Lecture Hall this past Tuesday at Salve Regina University. A lecture was being held to discuss the legacy of World War I, with five speakers from Salve’s own faculty. Speakers included, William Leeman, Ph.D., Jim Ludes, Ph.D., Timothy Neary, Ph.D., John Quinn, Ph.D., and Maureen Montgomery, Ph.D. Each panelist spoke about a different element of the First World War, reminding the audience of the horrors that occurred and the consequences of the Great War. Dr. Jim Ludes, discussed the ramifications of the end of World War I and how they shaped the rest of the 20th century. Ludes highlighted the significance of the Treaty of Versailles, specifically Article 231 (aka “the war guilt clause”), which essentially “laid the seeds of another war.” According to Ludes, the Treaty of Versailles ultimately left Germany feeling bitter, Europe feeling remorseful, and Japan feeling powerful. Ludes then proceeded to explain how British economist John Maynard Keynes pointed out the “glaring lapse” in the Treaty of Versailles—an exclusion of any economic fixes following the war. At the end of World War I, nothing was done to restore trade and the shattered nations of Europe were left to fend for themselves. Ludes concluded his discussion with the results of the Second World War—the terms that ended this war were made with the mistakes of the “Great War” in mind; there could not be a third world war. After Dr. Ludes spoke, Dr. William Leeman examined the rhetoric of World War I. Leeman explained that at the start of the war, President Wilson asked the United States to remain neutral, a choice that the public had agreed with. It was not until April 2, 1917 that Wilson appeared before Congress asking for a declaration of war. Wilson wanted it to be made clear that the United States was entering the war not for revenge, but for peace. In January 1918, at the end of World War I, Wilson issued his Fourteen Points, which established things like freedom of the seas, equal trade conditions for all nations and establishment of the League of Nations. Unfortunately for Wilson, the only point that survived the Paris Peace Conference in 1918 was the League of Nations. Wilson’s other points did not see the light again until the fall of France in 1940 during the Second World War when President Franklin Delano Roosevelt essentially “dusted off Wilson’s Fourteen Points” and created the Atlantic Charter. After the United States entered the Second World War, Roosevelt saw this as the opportunity to try and reinstate Wilson’s original vision of democracy for the United States to lead and for other nations to follow. The third speaker, Dr. Tim Neary, focused on the identity and citizenship of the United States following the First World War. Neary explained how Wilson’s push for a new world order abroad was also having an effect at home—American democracy “fell short in its promise of ‘life, liberty and the pursuit of happiness’”. The citizens that often missed out on the latter were women, African Americans and Roman Catholics. Following World War I, these three groups pushed for equal citizenship, becoming the “new” citizens of America. The first group was the “new Negro,” a term coined during the Harlem Renaissance. Two factors contributed to the formation of this “new” citizen—“The Great Migration” of 1.6 million African Americans from the rural south to the urban north and their participatory role in the war effort with over 350,000 African Americans. The “new woman” came about in the late nineteenth century largely because of their support of the war effort at home and abroad. Lastly, the “new Catholic,” a term coined by Neary, describes how the status of Roman Catholics managed to both strengthen and weaken following the war. The participation of Roman Catholics in the war effort showed that they could love God and country just the same, yet immigrant anti-Semitism was heightened, especially against Germans. When a new immigrant law was passed in 1924, it severely limited the number of people that could come into the country each year. The post-war period created more opportunities for the three emerging American identities—the “new Negro,” the “new woman,” and “the new Catholic”—but not without creating an equal number of challenges. Dr. John Quinn’s lecture focused on how the war affected Newport. Though it was a military town for many years before 1914 Newport saw a rapid influx of Naval recruits and personnel in the months before the United States officially sent troops to Europe. “The College Boys” as the residents called them, were often men from schools like Yale and Harvard who had joined to serve the United States. The town quickly saw itself fill to capacity as residents hurried to find space for them in their own homes. Over 75,000 men passed through Newport during training. Before World War I, Newport was home to a mere 2,400 residents. Once the war came to a close, Newport’s status had shifted to a military town, the military did not leave. The Gilded Age hit its peak during the 1890’s in Newport, the war and other events like the sinking of the Titanic and the government’s installment of income taxes dampened spirits. Newport was no longer the top vacation town for the affluent as it once was. The lecture closed with a short commentary from Dr. Maureen Montgomery who focused on American authors during the Great War, like Edith Wharton. Wharton traveled to the front lines during World War I and writing about her experiences. Wharton was also well known for her charity work, specifically with refugees of the war. Montgomery also was able to personally relate to the First World War, through her home country of New Zealand. The small nation was deeply affected by the war, Montgomery pointed out that 1 in 5 men that left to fight in the war never returned. The New Zealand native also explained how World War I memorials can be found in almost every town throughout the country.

At the end of the discussion, the audience was allowed to participate with a Q & A with panelists.