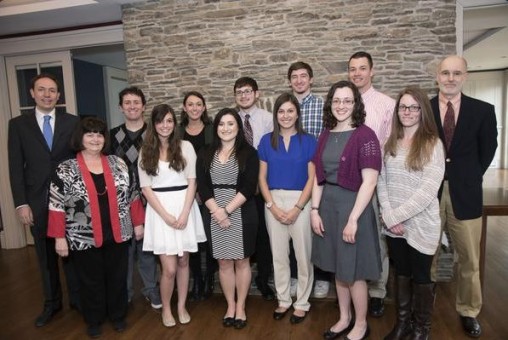 Newport, R.I.—Sixty-six Rhode Island students earned the Herbert and Claiborne Pell Medal for U.S. History this year.  The medal, administered now by the Pell Center at Salve Regina University, recognizes college and high school students in the state who have excelled in U.S. History.

The Pell Medal was originally presented by Senator Claiborne Pell and his wife, Mrs. Nuala Pell, for more than 50 years. After Mrs. Pell’s passing in April 2014, the Pell Center at Salve Regina University agreed to become the steward of the medal process.

“It has been a joy and an honor to recognize many of our most promising students across Rhode Island,” said Clay Pell who has personally presented several of the medals at events across the state.  “To me, this medal represents my grandparents’ reverence for the past as well as their confidence in future generations.”

Pell Center Executive Director Dr. Jim Ludes said, “While I chose a career in public policy, I prepared for that career by studying history. So I’m especially grateful that the Pell Center can help continue this beautiful tradition.”

Established by the Pell family, the Pell Medal is named for Representative Herbert C. Pell and his son, Senator Claiborne Pell.  Herbert Pell served as a member of Congress and American Minister to Portugal and Hungary, while Claiborne Pell, who is responsible for the creation of the Pell Grants and the National Endowment for the Humanities, served in the Senate for 36 years and worked to strengthen American foreign policy.

“I also want to recognize Ms. Jan Demers,” said Ludes.  “For years Jan helped Senator and Mrs. Pell administer the medal.  We at the Pell Center know we have big shoes to fill in our new role and we are grateful for the support and encouragement Jan has given us.”

The winners of the 2015 Herbert and Claiborne Pell Medal for excellence in the study of U.S. History are: