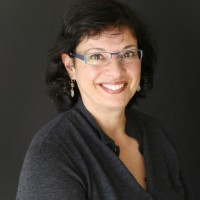 On Monday, April 13, the annual lecture sponsored by the Pell Center and Mosaic, Salve Regina University’s student newspaper,  featured journalist Sonia Nazario, who recently published her non-fiction novel, Enrique’s Journey.  The story of Enrique’s journey and Nazario’s journey spoke to the interests and curiosities of the many Salve Regina University students and community members in attendance. The lecture was also sponsored by the Office of Mission Integration.

Enrique’s Journey tells the true story of a young Honduran boy who travels to America in search of his mother.  Nazario describes the immense struggles Enrique faces: violence, starvation and thirst, and homelessness.  Nazario made this journey herself, traveling on top of trains and across rivers, facing many similar and terrifying challenges as Enrique.  Her discussion lead the audience through not only her and Enrique’s journey, but through the overwhelmingly perilous and often unsuccessful journey of thousands of people, mostly children, on their way to America.

Nazario began by revisiting her childhood and describing her family history.  Her mother and father both separately immigrated to Argentina, where they met, settled and started a family.  After the death of her father, Nazario and her family moved to America, and she described how she became interested in the oppressed and underprivileged.  Nazario attended Williams College, and soon became the youngest employee of the New York Times, where she began her work as a journalist.

After settling into her job, Nazario hired a housekeeper.  When Nazario asked her housekeeper about her children, she told Nazario the story of her family. The house keeper, originally from Central America, came to the United States had left three children back home in the hopes She hoped that in coming to America, she could send money back to her children and provide them with a better, more financially stable life—she had not seen her children in twelve years. The story touched Nazario deeply and inspired her to channel her focus on immigration, which would ultimately lead her on her journey through Central America and Mexico alongside of children in search of their mothers.

Nazario’s housekeeper’s story is not uncommon—extreme poverty in countries such as El Salvador, Guatemala and Honduras often drives single mothers to leave their children with grandparents if possible, make their way to America to work, then send money back to their children.  Although most intend on working for only a short period of one to two years, this can often drag on much longer.  Resultantly, children in such families will make the same trip to the US in search for their mothers.  This has caused a recent surge of unaccompanied children crossing the US border illegally.

Nazario dedicated herself to the journey that many children have completed, traveling from Tegucigalpa, Honduras to Nueva Laredo toward the US border.  Nazario traveled on top of trains alongside children.  She however, hunkered down in hotels at night, a privilege that other travelers did not have the luxury of and that she felt immensely grateful for.

Although she enjoyed some luxuries such as a bed at night, Nazario ran into inevitable trouble.  Branches and overhanging forest debris scrape the top of the trains, proving a rather large obstacle for travelers.  Nazario witnessed and experienced this obstacle as she and others endured beatings from low hanging branches, one throwing a young man off the back of the train.

More painful than the blow of branches, gangs and bandits wait along tracks and walk on top of the trains.  Nazario said that, at one point, she was chased down the train cars by a gang member, before she managed to escape with the help of the train conductor.  The gangs and bandits rob, rape and murder travelers, and in Enrique’s Journey, Enrique encounters similar trouble, receiving a harsh beating.

As much as there is violence and trouble along the tracks, there is also generosity and love, so much so that Nazario claims to have had it strengthen her faith.  People living along the railway throw bags of food and water bottles to the travelers.  This help often comes from those who suffer from poverty as well.  Despite this, people still give what they can.  Houses that line the tracks offer shelter to travelers at night.  Those without an extra bed or a little spare food come to the tracks as the train passes by and offer encouragement and prayers.

Travelers battle obstacles on every leg of their journey, and as many successfully make the journey, more do not.  The trains themselves provide an immense obstacle.  The trains kill some and maim many others.  Along her journey, Nazario visited a clinic for those maimed by the trains—many of these people were children.  Others who manage to avoid the treacherous tracks of the train can still be sent home in their attempts to make it to the US.  Nazario mentioned a young girl she met who had attempted the trip eight times and planned to attempt it again.  The determination of these children is amazing.

Nazario offers possible solutions to the problems of immigration.  She mentions stopping the problem at its source as one option.  The poverty in places such as Honduras and Guatemala cause mothers to search for work in America, which in turn causes children to follow them.  Therefore, attempting to eradicate poverty in these areas might begin to reduce the immigration problem.

Education of women also might reduce illegal immigration, Nazario says.  If young girls are expected to focus more on education, they will marry and have children at an older age and will likely have less children.  Women will also have qualifications for better jobs.  Less children and better jobs will reduce poverty.

Of course, every solution is simpler said than it is put into action.  Nazario certainly has an inside understanding of the struggles and experiences of those who make the journey.  Regardless of the nature of the solution, it will take much effort to reverse this problem.  Ultimately, it will be a victory and a blessing if adults and children no longer have to make Enrique’s journey.