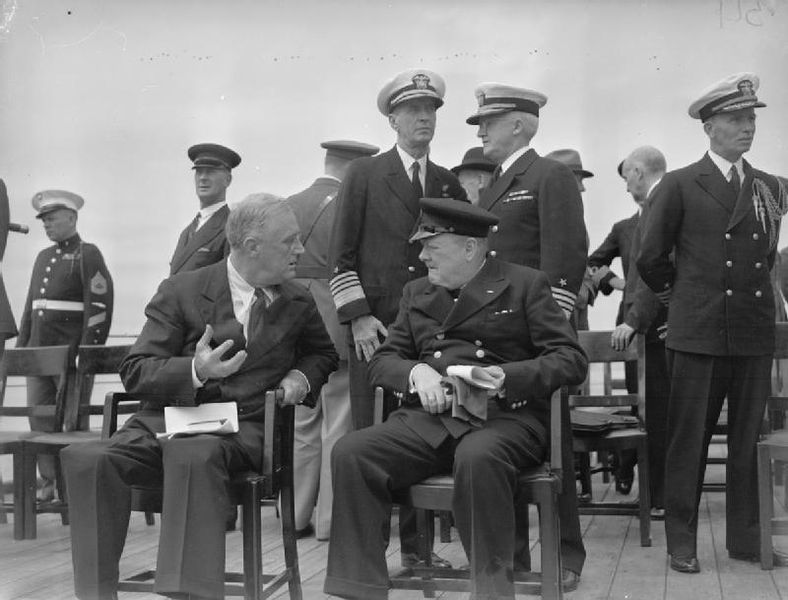 “Europe’s fate is in our hands”: Angela Merkel’s defiant reply to Trump | The Guardian

In August of 1941, in Placienta Bay, Newfoundland, Canada, President Franklin Delano Roosevelt and British Prime Minister Winston Churchill met and agreed to The Atlantic Charter.  While the United States was not formally in the war, yet—Pearl Harbor was still four months away—the Atlantic Charter set out war aims to guide the allies as they thought about the outcome of a fight that had yet to be fully joined.

The Atlantic Charter is a foundational document of the post-World War II international order.  Churchill and Roosevelt had pledged their nations to fight for a rules-based international order and free trade—and they stated it unequivocally.  Neither the United States nor the United Kingdom sought new territories from the war.  They endorsed self-determination and popular sovereignty.  They imagined an era of peace, free from “fear and want.”  They embraced freedom of the seas, disarmament, free trade, and economic globalization.  Specifically, they pledged to:

endeavor, with due respect for their existing obligations, to further the enjoyment by all States, great or small, victor or vanquished, of access on equal terms, to the trade and to the raw materials of the world which are needed for their economic prosperity.

In addition, the charter promised that the leaders

desire to bring about the fullest collaboration between all nations in the economic field with the object of securing, for all, improved labor standards, economic advancement, and social security.

Four years later, peacemakers built an international system in line with the vision painted by Roosevelt and Churchill.  It was not done out of deference to the two statesmen who led the West through the crucible of battle.  Instead, it was done out of calculated self-interest.

In the course of a generation, World War I and World War II had claimed somewhere between about 70 million and 100 million dead.  Millions upon millions more were wounded, displaced, or left to starve.  Aerial bombardment and urban warfare combined to leave the industrial hearts of Europe and Asia little more than rubble.  In looking back at the era, statesmen set out to create an international system that would avoid a third world war—something unthinkable in the atomic age.  They sought to understand how the first half of the twentieth century had produced such catastrophic death and destruction, and then, armed with judgments about the causes, built an international system to make it less likely.

The institutions they built—imperfect though they were—enshrined a rules-based international system.  The United Nations provided a forum for dispute resolution short of war because failure to provide an effective mechanism meant that the world’s only recourse to dispute was the ancient adage that might makes right.  The UN’s different bureaus took on issues that threatened human development, like poverty and hunger, because they could threaten the peace and stability of nations.  The World Bank and International Monetary Fund helped rebuild economies shattered by war because the failure to rebuild Europe’s economy after World War I was recognized as one of the causes of World War II.  The General Agreement on Tariffs and Trade (GATT) reduced taxes on trade around the world because tariffs in the interwar years were seen to have contributed to heightened tensions between the great powers.

In one final post-war innovation, the United States finally broke free of its nearly two centuries of determined isolation from the world and committed itself to global leadership.  As the world’s most powerful state at the time, and for the next four years the world’s only nuclear power, American leaders in both parties—Roosevelt, Truman, Marshall, and Eisenhower—saw that the United States had to play a steadying hand in Europe and Asia.  The ideology of “America First,” an inter-war movement intended to sustain American isolation from the problems of the world, was destroyed in the carnage of World War II.  Now, in the late 1940s and early 1950s, the United States built formal alliances all over the world—perhaps most famously in Europe, where members of the new North Atlantic Treaty Organization (NATO) pledged that an attack on one member was an attack on them all.

A political settlement with an enduring commitment to norms of behavior and international law; an economic settlement founded on free trade and enabling globalization; and an iron clad American commitment to security and stability, especially in Europe, were the key features of this new world.  So new and substantial was this approach that Secretary of State Dean Acheson titled his autobiographical account of these events as Present at the Creation.

This week, the United States of America, joining a growing global trend of retrenchment and neo-nationalism, inaugurated Donald J. Trump as its 45th president.  As a candidate, and as president-elect, Trump has questioned the fundamental underpinnings of the international system created by the peacemakers of 1945, even resuscitating “America First.”

As a candidate, he asserted a pre-World War I view of national sovereignty:

We will no longer surrender this country or its people to the false song of globalism. The nation-state remains the true foundation for happiness and harmony. I am skeptical of international unions that tie us up and bring America down and will never enter . . . America into any agreement that reduces our ability to control our own affairs.

Of the United Nations, President Trump has described it as “just a club for people to get together, talk and have a good time.”

Of NATO, Trump as a candidate openly questioned America’s commitment to live up to its obligations for collective defense.

Of the European Union, long a mainstay of U.S. policy towards the continent, Trump supported Brexit and more recently predicted the EU would break-up.

Of free trade, candidate Trump vowed to withdraw from the Trans-Pacific Partnership, renegotiate NAFTA, and impose tariffs on goods imported into the United States.

Of globalization, candidate Trump has dismissed the process as a fleecing of the working class that only benefits “the financial elite who donate to politicians.”  There is open and cavalier talk of a trade war with China.

It’s as if all the bloody and awful lessons of the first half of the twentieth century expired, vanished in a flash of white phosphorous.

I sincerely hope that our new president succeeds in leading America forward into an era of sustained peace and prosperity.  But the historian and student of international security and globalization in me is fearful.  If Acheson was present at the creation, I fear we will be present at the destruction of the international system that has protected peace, security, freedom, and prosperity for so much of the world since 1945.  I hope I’m wrong. – Executive Director Jim Ludes