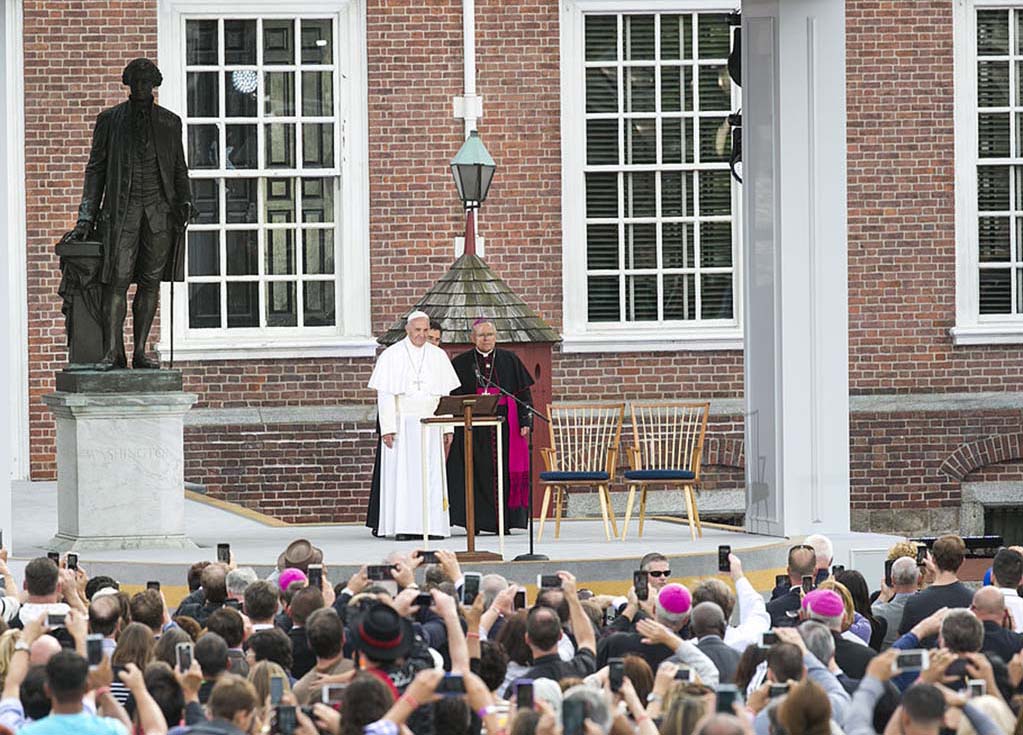 Hundreds of thousands of people gathered in Philadelphia on September 27, 2015 to see Pope Francis deliver his World Meeting of Families.  Salve Regina University’s Mercy Center sent eight students and two faculty members, Dr. Anna Mae Mayer and Dr. Jayme Hennessy, into the thick of the excitement. I was lucky enough to join the pilgrimage as one of those ten.

The group departed Salve Regina University at 6:00 am on Saturday morning and arrived at Gwynedd Mercy University later that afternoon. Six schools in total gathered at Gwynedd for a night of Mercy education and, of course, for the Pope’s visit.

The events commenced on Saturday afternoon and continued into the evening. The 150 or so students were split into groups to discuss critical social concerns, including racism, women, immigration, nonviolence, and the environment. I chose the women’s group.

Our group, a group of all women, discussed issues ranging from women’s education, to double standards, to the patriarch of the Catholic Church. We put together a poster and a presentation recapping as much of our conversation as possible, as well as offering advice for everyday action to support women. It seemed as though each group enjoyed and benefited from the conversations and presentations.

That evening, the Pope spoke in front of Independence Hall. The students staying at Gwynedd watched from an auditorium on campus, and engaged in discussion directly afterwards. In anticipation of the following day in Philadelphia, Gwynedd laid out an array of Philadelphia foods. Some students engaged in a game of flashlight tag on campus, and others, including myself, enjoyed a trip to the popularly acclaimed “Wawa” for a hoggie.

Sunday was the day everyone had made the trip for, so we headed out early for Philadelphia. The bus arrived at a parking lot about four miles away from the site of the Mass. We walked amongst thousands of others making the pilgrimage. Streets closer to the Mass were closed off to traffic, and they were instead jammed with a river of people all swiftly moving in the same direction.

We arrived to groups of people dancing and singing. No one sat down because of the lack of room; most stood on the tips of their toes for the following six hours. At 4:00, the Pope drove through the streets toward the site of the Mass. He did not drive down the street that most of the students from the Mercy Center were standing on, but he was visible when passing by a parallel street.

The Mass lasted for about an hour and a half. It included several different languages. The readings were in English, Spanish, and Vietnamese. The Pope gave some of the Mass in Latin, some in English, and delivered his homily in Spanish.

Despite the immensity of the crowd and the large ground to cover, Eucharistic Ministers made their way out to the people. The crowds parted for those in the back to come forward and receive the Eucharist. Those in the front who received broke off a piece and passed it back. The sight was the most unified and caring I have ever seen from a massive, tired, and excited crowd of people.

Pope Francis ended his final mass in his U.S. visit with humble words, “I ask you to pray for me.  Don’t forget!”  His closing words not only induced some laughs, but also emphasized an important point.  Millions of people around the world adore Pope Francis, and wish to get a glance at him, or hope that he kisses their babies or offers them a blessing. However, like all of those millions, Pope Francis is human.

The Mass concluded and the streets of people quickly thinned to streets of crushed water bottles and lost or forgotten knickknacks. Everyone headed back through an even more congested and tired rush.  Four miles later, we finally sat down on the bus and returned to Gwynedd Mercy University.

The weekend concluded. We had walked over nine miles, stood for seven hours, eaten about a dozen on-the-go granola bars, driven over 275 miles, gotten no more than ten hours of sleep and two hours of homework in, and had seen one Pope. In total, the experience is counted as once in a lifetime.