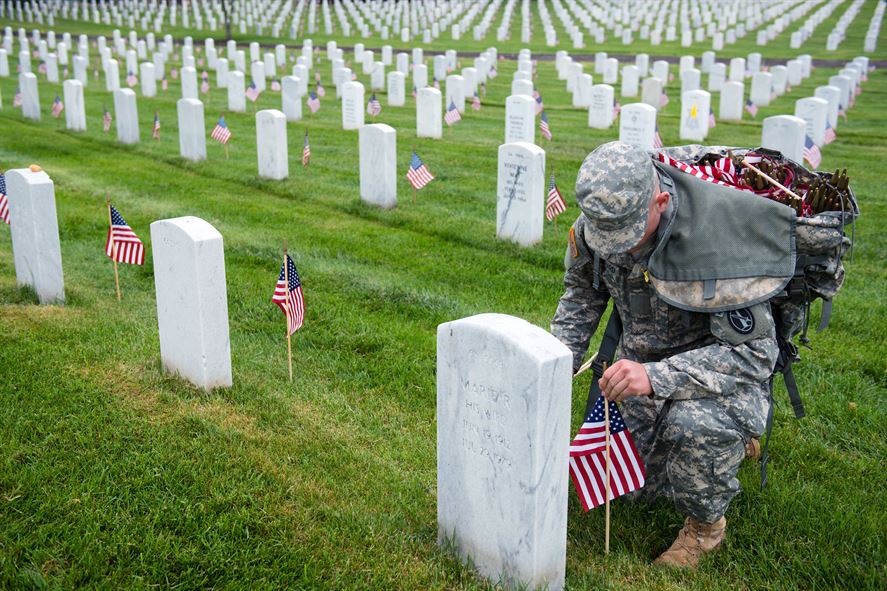 Those Left Behind: The Legacy of Arlington’s Section 60 | Reuters

As I write this, the sun is rising on the green woods behind my home.  My dog is lying on a chair next to me, snoring.  I’m well fed and I have enough to drink.  I have a good job.  I’m safe.  I’m free.  The dangers of the world, at this very moment, seem distant.  In short, I am blessed.

Those blessings have many sources and come in many forms.  I’m blessed by the geography of my birth, by decisions made by ancestors generations ago, by the hard work and education valued by my parents and their parents.  You can call it ancestral good luck.

But I’m also blessed by the selflessness of others—and this Memorial Day weekend, I’m mindful of all those who have given what Lincoln called, “the last full measure of devotion.”

I was 30 years old when al Qaeda attacked the United States on September 11, 2001.  My country has been at war since.  New students entering the university in the autumn were two or three years old on that fateful day and most certainly don’t remember a time when America was not at war.

For most Americans, “at war,” has meant a steady stream of difficult news—if they pay attention to such things.  It has not cost Americans increased taxes.  War has not led to shortages of any kind on the home front.

Yet there are Americans for whom war has exacted the ultimate price.  Fewer than one-half of one percent (0.4 percent, to be precise) of the American public currently serves in the U.S. military.  The folks at fivethirtyeight.com estimate that 7.3 percent of living Americans have served in the military, but when you break that number down, the largest segment is still made up of veterans of World War II.

In other words, the thinnest of slivers of the American public has borne the weight of battle in Iraq and Afghanistan.  To date, 6,888 Americans have died in the wars we have fought since 9/11, in addition to the 52,435 wounded.

The first article I selected for this week’s picks of the week is about two Marines—Corporal Jonathan Yale and Lance Corporal Jordan Haerter—who stood their ground in the face of an on-coming suicide bomber.  They are among the 6,888 who have died, but in their selflessness, they kept that number from growing to 7,038.

Despite a world full of deadly serious issues, the 2016 presidential campaign is already shaping up to reach new lows in terms of personal attacks, insults, and divisiveness.  In the midst of it, we need to remember the Jonathan Yales and Jordan Haerters who are out there, standing their ground for all of us.  We need to be worthy of their sacrifice, as individuals, as candidates, and as a nation.

We have a lot of work to do.