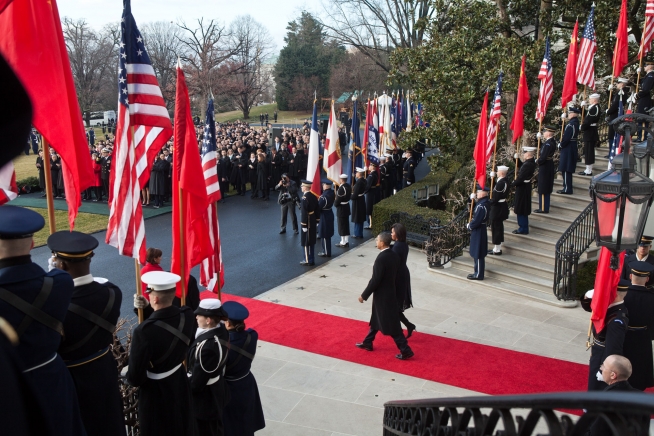 Two prominent world leaders—Pope Francis and Chinese President Xi Jinping—are in Washington DC on official state visits this week, and although both leaders will be afforded red-carpet treatment they come with different agendas and will find DC host to different climates. The stark contrast between the Pope’s visit and President Xi’s visit has been palpable in recent days and is testing Washington’s diplomatic, political, and organizational abilities.  While the Pope has been welcomed by ceremonial displays of respect and cooperation by state officials, and has drawn hundreds of thousands of people to his events, President Xi will have state ceremonies and meetings with business leaders (largely behind closed doors), but has also already been confronted by a series of demonstrations of human rights activists protesting against China’s repression of online expression and other human rights abuses.

President Xi leads an economic superpower that U.S. officials believe is responsible for widespread theft of government and corporate secrets, from nuclear power plant designs to search engine source codes to confidential negotiating positions of energy companies to the massive breach of the Office of Personnel Management’s computers. Indeed, his visit comes as the U.S. is wrangling over whether to impose economic sanctions against Chinese companies and individuals who have benefited from the thefts of U.S. intellectual property and trade secrets. Tensions between the two countries extend to a range of other issues as well, including maritime skirmishes in the South China Sea and China’s efforts to devalue its currency in the face of the recent stock market plunge.

China has consistently denied accusations of cyberspying, but the dispute with China highlights the different climates that are preceding—and characterizing—the visits of Pope Francis and President Xi. In an interview with The Wall Street Journal, President Xi said that “China takes cybersecurity very seriously,” and that his government “does not engage in theft of commercial secrets in any form,” and that China doesn’t encourage it from Chinese companies.

Sanctions are unlikely to be imposed while President Xi is visiting the U.S., and it is even expected that President Xi and President Obama may announce an agreement on principles governing the use of cyber attacks against critical infrastructure, embracing a commitment by each country that it will not be the first to use cyber weapons to cripple the other’s critical infrastructure during peacetime. President Xi has declared that China is ready to collaborate with the U.S. and the international community “to build a peaceful, secure, open and cooperative cyberspace on the basis of the principles of mutual respect and mutual trust,” but it remains to be seen whether President Obama will confront President Xi directly over the contentious issues, in an attempt to push parties to draw some lines around their behavior, or whether President Obama will celebrate an unexpected partnership on issues like climate change and Iran, choosing instead to handle the frictions over cyber espionage, maritime security, and human rights in private.

As the same red carpet was ceremonially rolled up after the Pope’s departure yesterday afternoon, then ceremoniously unrolled in the same spot for President Xi’s arrival in the evening, the world was watching to see whether either state visit will have any practical effect in the fight to end poverty, income inequality, climate change, human rights abuses, and economic espionage. Most likely than not, progress will not be achieved over one state dinner, and more discussion and time will be needed before results are reached. – Francesca Spidalieri